Mom baked her peach pies with fresh peaches and a special Thanksgiving life lesson to be learned.

As time goes by, I am forever giving thanks for my mother's peach pies, from which life lessons I learned.

The taste of my mom's homemade peach pies, the life lessons learned from sharing them, and her voice crisp and clear as Thanksgiving nears—all things remembered in the photo album of my heart—all things for which I give thanks.

I share these delicate memories with you now as I share my mom's peach pie recipe and the life lesson her peach pies taught me.

No doubt you shall agree that mom's peach pie filling is out of this world but its teachings are as down to earth as can be.

from my Mother and her Peach Pies

Practice What Is Preached
Better yet – practice peaches.

Or – is it about peaches? 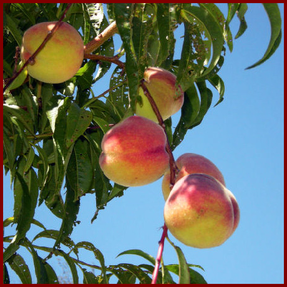 Many suns ago, when I was around twelve years old, my mother taught me a valuable lesson through the use of a wee basket of peaches. A frail neighbor lady had given Mom the peaches at Church that morning.

Arriving home, off to the kitchen we went – me to slice up the peaches, Mom rolling out the pie crust to hold them when I finished. We had enough to make two large pies, which were doused with a mixture of butter, brown sugar, and seasonings, then into the oven they went.

Soon the kitchen was warmed by Mom’s secret recipe and the promise of an end to hunger was the scent that filled the air. As the pies were cooling in the window, my younger siblings and I were whacked a time or two for trying to snatch a peach through the popped tops of the pies.

Finally the moment we’d waited for arrived. Mom cut the first pie into eight perfect pieces – one for each of us kids and one for herself. She then covered the second pie with a clean kitchen towel and handed it to me with directions. “Take this to Mrs. Wright and don’t you dare snatch a peach out of the pie!”

I remember standing there staring at my mother, thinking she was nuts. We were starving. There were eight of us and she was one little old lady. Why on earth did she need a whole pie?

Mom must have read my mind or maybe the words came out of my mouth, for I got slapped across the face as she said, “Do as you are told Ruth Anne.” I took the pie to Mrs. Wright, wiping my tears with the towel along the way.

I returned home, ate my slice of pie, cleaned up the kitchen and went to bed. Neither my mother nor I ever mentioned the pie incident again.

A few years later, as I was planning a Thanksgiving dinner with my boyfriend’s family, I thought of my mother’s peach pies. I dropped what I was doing, telephoned her and asked her for her secret recipe. I could hear the joy in her voice as she gave me directions with a pinch of this and a pinch of that as seasoning measurements for the peach pie filling.

My pies didn’t taste much like I’d remembered Mom’s tasting. But they were just as good I’m sure. For they were the hit of the day when the story of the pies I retold, this time from a no longer hungry and from a much wiser point of view.

On that Thanksgiving day I thanked my positive power for the lessons learned in my mother’s kitchen that sunny afternoon years ago. She had taught me that no matter how little you have, you always have something to share with another in need, and that you mustn’t do it begrudgingly.

I would never use Mom’s secret peach pie recipe again. For she died on December 1st, shortly after Thanksgiving. I keep the recipe, along with the joy in her voice on the telephone that day, in a special place in my heart.

Occasionally, I bring the peach pies out on the table, their story once again to be told. Today is one of those occasions. A dear friend would need to know why I said they reminded me of my mother’s peach pies. I want my friends to know what a difference they and Mom’s pies have made in my life.

Friend – it’s all about the peaches!

Are you pie crust challenged?

Or Queen of Killer Crust?

A Work of Art

Have you mastered the art of making a killer pie crust? Not I!

However, I have found the perfect Double Pie Crust recipe for my mom’s peach pie recipe! But of course, you are welcome to use your own crust with this peach filling recipe of my mother's.

For the Kitchen Queen

You are the Peachy Keen Kitchen Queen of homemade peach pies. Wear the title with pride!

My kitchen apron creation is perfect as a gift for friends and family members who bake delicious peach pies, cobblers, and other desserts for Thanksgiving, Christmas, or for any or all holidays and occasions.

Now Put On Your Apron—Time to bake a peach pie! 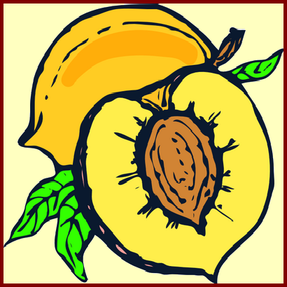 Roll out your pastry for a deep dish two-crust pie, putting bottom crust in the pie dish.
Sprinkle 1+1/2 Tablespoons of minute tapioca on the bottom crust.
Combine first 9 ingredients in large bowl, mixing well.
Pour mixture into the pie crust and dot the pie filling with butter.
Add top crust, pinching edges of top and bottom crusts together carefully.
Brush top crust with milk.
Poke holes in the top crust with a fork.
Bake in preheated oven at 375 degrees for approximately 45 minutes.

Cover With A Kitchen Towel
Cool in a safely guarded spot for as long as you can fend off those giving thanks for peach pie!

My mom must be as proud as a peacock for she has received the best food compliment ever!

As a writer, I am delighted when someone reads an article of mine and puts the information to good use. That's just what happened when a fellow Wizzley writer - CorreenK - read my mom's peach pie recipe!

CorreenK sent me a private message saying, "I made the peach handpies using your filling recipe. Exceptionally tasty and gone in a couple of days."

I was beside myself with joy. I told CorreenK she had not only made my day but that she had made my Thanksgiving.

She responded with, "I love making people happy that make me happy! We truly enjoyed your mom's peach pie filling recipe tucked inside our hand pies."

She even took pictures! Yes, these are photos of the hand pies CorreenK baked using Mom's recipe. (Note that she even prettied them up for me!) Who could ask for anything more? Yes, as ever, I've much to be thankful for this Happy Thanksgiving.

Made by CorreenK Using My Mom's Secret Recipe

Mom's Peach Pie Recipe Book for Guests--You provide the feeling for thanks giving.

I returned from Italy 24 hours ago and whilst I was there I had their own homemade peach ice-cream.. twice ! It was heaven on the tongue.

Why, thank you, Veronica! I do chicken with apricots wrapped in foil on the barbecue...delicious!

Ruth I thought of you this week whilst I was on holiday as my daughter in law cooked Chicken with Apricots for us and it reminded me of this delightful article. TY .

You choose Grandmother's recipes, just as I would, no doubt.

Publish recipes? Thank you but I deserve no such praise. I am a historian who loves cooking. At our local Italian place near here the two owners serve the usual pizza, pasta, rice dishes but also their grandmother's handwritten Italian foods. Authenticity on a plate, the food of the people.You do not have to guess which dishes I usually choose ;)

You're welcome! I need to check to see if you have published any Italian recipes here on Wizzley!

Wowwwww ! Respect Ma'am . Thank you for you ideas.

I do like to tell people about Italian food as it is indeed unfortunate that it is only associated with pasta ,pizza and risotto. Delicious as they are, they are not the beginning and end of Italian food. Italy has a host of regional cuisine from Austrian influences in the far North to North African influences in the South, Greek in the East .

That just sounds fabulous, Veronica! I like to wrap chicken pieces with nectarines (or peaches or apricots) in foil. Toss on the grill for an hour or so, slow-cooking them. Add some grilled eggplant on the side ... Delicious dinner is served!

Oh my, frankbeswick, delicious it is! Sometimes I'll do pork tenderloin, even pork chops, in the crock pot with peaches, spices, and a light honey mustard sauce. Try it, you will like it!

Yes It was in Tuscany Italy and I am a firm believer in eating local food when I travel. It was in a back street tavern in Florence. Tuscan bean and barley soup with Italian bread followed by wild boar and caramelised peaches with Tuscan potatoes done in garlic and rosemary, Meals come and go but that meal I have never forgotten.

Chicken with nectarines ? I must eat. Thank you for your time in replying .

This dressing and slaw recipe will become your favorite reason for going gree...

Chicken Not Quite Paella Surprise Recipe

My Not-Quite-Paella-Surprise for dinner is a quick and easy meal that is, in ... 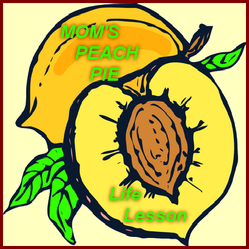 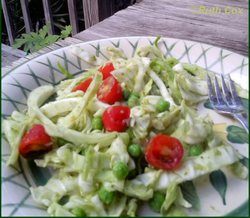 This dressing and slaw recipe will become your favorite reason for going green and adding more raw foods and salads to your diet!
84%  16   6 RuthCox
Main Dish and Entree Recipes 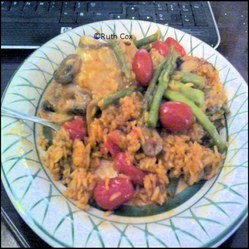 Chicken Not Quite Paella Surprise Recipe

My Not-Quite-Paella-Surprise for dinner is a quick and easy meal that is, in fact, an adaptation of a traditional recipe.
Loading ...
Error!