Synopsis: A World-War-II American submarine is on patrol in the Atlantic Ocean when it is ordered to rescue three survivors from a British medical ship believed to have been sunk by the Germans. Shortly after bringing the survivors on board, the ship begins experiencing a variety of strange malfunctions which, upon further investigation, appear to be caused by the sub's former captain, who died under mysterious circumstances and now wants to go down with his ship.

I came across this movie a few days ago while skimming our movie channels. I hadn't heard of it before and didn't know much about it. But, the description sounded interesting so I ended up recording it anyway and my wife and I finally had a chance to watch it last night before bed. As it turns out, this is a surprisingly good film.

There are a couple things, in particular, I really liked about this movie. The first is the mystery surrounding the ship's former captain. The official story was the captain (Nick Hobbs) fell overboard while trying to collect souvenirs after sinking a German submarine but, partly because of the fact the captain seemed to be haunting the vessel and partly because of the actions of the ship's crew, it was obvious that story wasn't completely accurate. And, as the movie progressed and more details were released, that part of the plot only got more intriguing.

Another thing I liked about this movie was the setting. Horror movies/thrillers are only as good as their surroundings and, you can't get much creepier than a submarine that is underwater and, both because of mechanical issues and an enemy ship, can't surface. The submarine gave everything a claustrophobic feel, adding to the intensity. Plus, as the air quality steadily got worse, it became hard to tell if what was happening was real or if the crew was simply hallucinating.

The twist toward the end of the movie, which finally reveals exactly what happened to the ship's captain and why, was pretty decent. It was something I was able to guess about earlier on, but really didn't know for sure until the evidence was presented. And, once the truth was revealed and the sub's acting commander (Greenwood) began taking matters into his own hands, the intensity only increased. A lot of movies in this genre tend to taper off toward the end, but that was definitely not the case this time around.

This was a surprisingly good movie with a good mix of paranormal chills, action and mystery and was given a major boost simply from the setting. As I mentioned before, it's a movie I had not heard of prior to watching it. But, after seeing it, I would recommend it. 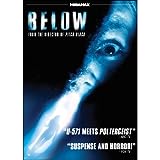