A review of the supernatural thriller starring Florence Pugh and Ben Lloyd-Hughes.

Synopsis: Siblings Jackson and Angela run a profitable scam involving Angela pretending to be a medium with the ability to talk to ghosts and convince them to leave people's homes. When Jackson insists they pull the same scam at a former foster home with a history of a brutal mass murder, he thinks of it as just another job. However, this time, something is different. Angela really can see and hear the ghosts of the little girls who were tortured and killed.

My wife and I spent a good chunk of our Sunday getting caught up on the TV shows we had DVR'd over the past couple of weeks. As a result, since we didn't have anything else to watch last night, we wound up looking for a movie on Netflix.

I came across this particular film several days ago and had gone back and forth about whether or not I wanted to watch it. Movies involving ghost hunters encountering a real haunted house have been done to death (pardon the pun). But, at the same time, my wife and I have had relatively decent success with Netflix films. Ultimately, I decided to give it a try and, unfortunately, was disappointed.

The premise of this film isn't necessarily a bad one. It's just the filmmakers seemed to lack any real imagination when they made the movie. To make a long story short, the film was very predictable with even the "surprise" twist at the end seeming like it came out of Cliché Movie Twists for Dummies. As a result, instead of being scary, it was actually kind of dull.

I think one of the things that really hurts this film is, while it puts a lot of emphasis on the murdered girls' ghosts, there wasn't anything particularly scary about them. In fact, they didn't do much more than make noise and lead Angela (Pugh) to clues about what really happened in the house. And, given the truth wasn't exactly difficult to figure out, I couldn't even describe it as a good mystery.

In fact, probably the only thing mysterious about this film (other than what caused Angela to suddenly be able to talk to ghosts for real) was Mrs. Green's (Imrie) motive for inviting Angela and Jackson (Lloyd-Hughes) to the house in the first place. At first, I thought she knew they were scammers. But, once I realized that wasn't the case, then her invitation really didn't make a lot of sense. Even if she wanted to get rid of the ghosts, why invite someone who could discover the truth? Wouldn't it have been easier  and safer to just move?

As I said before, the movie had a good premise. But, as is often the case with horror films, poor execution made it not-so-scary. I would not recommend it as a result. 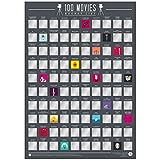