A review of the 1975 comedy starring Graham Chapman and John Cleese.

Synopsis:After traveling throughout Britain and assembling his Knights of the Round Table, King Arthur is given a quest by God to seek out the Holy Grail. He and his knights accept the challenge and encounter a series of obstacles including everything from a man-killing rabbit to a group of rude French knights guarding a castle.

It's been a pretty stressful week this week, complete with some bad health news from a family member. So, in an effort to end it on somewhat of a high note, I decided to finally keep my promise to watch this movie with my oldest daughter.

To tell you the truth, it had been a while since I had seen this movie and I was a bit concerned it wasn't as funny as I remembered, especially since I wasn't as impressed with Monty Python's Life of Brian as I thought I would be. However, after watching it last night, I have to say it was the right choice.

I think the thing I like best about this film is the way it is broken down into a series of short stories (similar to the actual King Arthur books) that gave each of the main players a chance to show off their skills. My favorites had to be Sir Galahad (Michael Palin) trying to remain chaste after accidentally stumbling upon a castle full of beautiful and amorous women (I scene I probably should have let my daughter watch, in hindsight) and Lancelot (Cleese) going overboard in an effort to rescue a princess who turns out to be a prince (Jones). Oh, and of course, the scene with the rabbit is always a classic.

My daughter also loved this film and was laughing from start to finish. I think her favorite scene had to be Arthur's (Chapman) battle with the Black Knight (Cleese), a scene she's seen in meme form on the internet but, up until last night, had never fully understood just how funny it was.

My only real complaint about this film is I'm still not a big fan of the ending, which ruins the King Arthur illusion by bringing the film into modern times. I'm sure there was supposed to be some sort of political joke in there or something. But, it's honestly a decision I still don't fully understand today and just can't find funny (my daughter was disappointed by it as well). Fortunately, the rest of the movie does more than make up for that.

As I said, I'm not a big fan of the ending. But, the overall movie is a comedy classic that is worth taking the time to watch at least once if you haven't seen it before. It definitely was one of the very few bright spots in my week. 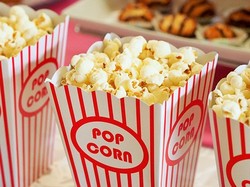