George A. Romero's series of zombie movies moved into its third incarnation. The plot lumbered more than the living dead.

I absolutely adored 'Night of the Living Dead'. I giggled my way through 'Dawn of the Dead'.

They were two totally different films, which left me wondering what could possibly happen in the third installment. What would 'Day of the Dead' be like? Profound or funny or both? It was with a large measure of gleeful anticipation that I sat down to see.

I will never get those 95 minutes of my life back again.

Day of the Dead on DVD

Day of the Dead was a Dud

Over-acting and a weak storyline ruined a film, which largely followed the formula of the first two. But failed to even realise that. 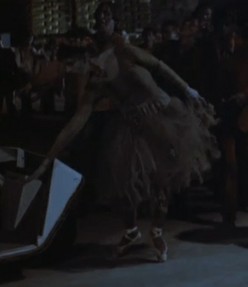 It's not fair to say that I got nothing at all from this movie.  There was a two second glimpse of a ballerina zombie, lurching by on tip-toe, which will amuse me for years to come.

However, ballerina zombies do not a great movie make; and the rest was abysmal.  I could act better than most of the cast.  I've seen kindergarten nativity plays acted better than this lot.  The stereotypes galled.  The formula was in evidence, but failed to deliver.

The zombie make up was good.  I'll give them that.

I'm so disappointed with George A. Romero, because I know that he has wonderful zombie stories in him.  He's directed the most classic movies of the genre!

Night of the Living Dead was sublime.  What Dawn of the Dead lost in deep commentary, it more than made up with in entertaining story-lines and sheer hilarity.

What precisely did Day of the Dead bring to the party?  Maybe a faint anti-war message, in all of the 'I'm in the army and I'm really stupid' bravado; backed up by the fact that even a zombie can be a soldier.  In fact, zombies make really great soldiers.

The gore-fest fans had some great (albeit unrealistic) moments of bloody slaughter.

There was an underlying theme of 'if we don't work together and communicate, then we're all doomed'.  But it was all so clumsily done, with cringe-worthy posturing, that frankly I stopped caring after the first half an hour.

The trailer makes this look so much better than it actually is. Please note that there is gore and strong language in these scenes.

What is Day of the Dead About?

Zombies. Pet zombies. Zombies that mad scientists experiment upon. Plus people you don't care about shouting at each other in measured tones. 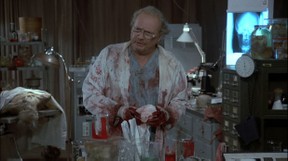 Those who have seen the first two know that the whole of the USA is infested with zombies.

Deep underground, in an old military installation, a group of scientists are working hard to understand the living dead from a medical research point of view.

Sarah wants to reverse the phenomenon; Matthew (aka Frankenstein (pictured)) seems more interested in training zombies to do his will.  It's never quite stated what the third scientist, Ted, actually wants to do at all.  They are supported by a team of military men, alongside a helicopter pilot and a radio operator.

Nobody is happy.  Zombies have surrounded the complex.  Forays in the helicopter have established that there's no living person but them for one hundred miles radius of their installation.

As for the soldiers, most are dead and buried outside.  One is on the brink of a nervous breakdown.  Their leader, Captain Rhodes, is trigger happy and practically insane with the pressure.

It's like watching a tribute to Marlon Brando's Kurtz from Apocalypse Now, but without a smidgeon of his acting talent.

The overall acting and script may have been bad, but I recognized an iconic zombie when I spotted one.

Bub was Frankenstein's pet zombie.  A military man while alive, this was a zombie who knew how to obey orders and not eat people when they walked past.

He responded to stimuli, designed to trigger those latent memories, with a view to proving Frankenstein's theory that zombies could be trained to be civilized.  As 'star pupil', he also seemed to have a better sense of ethical behavior than half of the living humans.

Had the plot-lines involving him not been so predictable, then Bub would have been the redeeming feature of Day of the Dead.  As it was, we're still left with just that two second glimpse of a tip-toeing zombie ballerina.

Introducing Bub from Day of the Dead

This is a seven and a half minute segment from the center of the movie. No massive spoilers, though you can probably deduce the rest of the movie from it.

Day of the Dead Does NOT Pass the Bechdel Test

Sarah was the token female. The ballerina wasn't named. There wasn't any other female with whom Sarah could have a conversation. 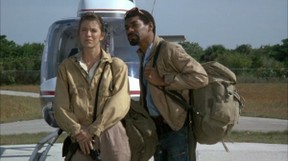 It's quite interesting to watch George A. Romero grapple (badly) with the pressures of Feminism in his zombie movies.

The first three came out during the rise and heyday of the Women's Lib Movement; and his work was singled out for especial criticism accordingly.

To be fair, Night of the Living Dead was absolutely patronizing to its female characters. In Dawn of the Dead, he portrayed Francine as a strong woman, who even delivered a Feminist mini-speech halfway through.

By Day of the Dead, he went one better and wrote Sarah as the actual protagonist.

She arrived wearing a feminine version of Indiana Jones's best adventuring outfit.  She barked so many orders that it was obvious that she was in charge.  It took until about half an hour before we even realize that she's not the boss, she's just one of the scientists.

Yay for strong, competent and intelligent female characters!  But oh dear on just about everything else.

The sexist speeches in Night of the Living Dead were casually delivered.  Those saying lines equating women with helpless children weren't trying to be offensive.  That was genuinely their world-view and it would have surprised them to know that it was wrong.

By Day of the Dead, the speeches were in your face and aggressive, designed to intimidate Sarah with shows of strength (including actual slaps across the face) and threats of rape.

The comments were framed to depict just how nasty the power-hungry soldiers were, rather than anything particularly anti-female on the part of the film-maker.  They were uttered from the same mouths which called Johnnie a 'jungle bunny' and Miguel a 'Spic'.  Repeatedly.

Rather more subtle was the fact that the only Irishman in there was depicted as constantly drunk.

I'm not saying that those army men had to be politically correct, as that would have been out of character.  But the sexism and racism were hurled in lieu of anything else clever to say in the script.

What happened to the sentiments in the first two movies?  There the color of the two black men didn't even draw comment.  This one just felt puerile in comparison.

Buy Day of the Dead on Blu-Ray

Watch Day of the Dead on Amazon Instant Video

Why Do We Fear Zombies?
Zombies hold such fear and fascination for human beings that preparing for their Apocalypse is practically a meme. But why are we so afraid of zombies?

Are You Prepared for the Zombie Apocalypse?
We all know that it's coming. The internet has been talking about an infestation of zombies since about 2008. But are you ready?
Updated: 05/08/2013, JoHarrington
Thank you! Would you like to post a comment now?
10

You're completely right about rooting for the zombies. The cast is so bad, that you want the zombies to get to them.

That's really interesting about the director commentary. How come they didn't have so much freedom of expression? Was a studio breathing down their necks?

Thanks for your insights.

Is that saying that even the 'rebels', or the 'people being wrong in your vicinity', can find redemption? As long as you brainwash them enough or train them, obviously. What went so wrong? Maybe Romero was a one-trick pony and got it all out of the way in 'Night of the Living Dead'.

No, I haven't seen beyond the first three yet. I'm almost scared to now!

I felt this was on a par with Dawn of the Dead. Its after this that Romero's zombie movies start to become almost parodies of themselves. This is the start of Romero grappling with the idea that something alien, monstrous and entirely "othered" could be rehabilitated, and also with the idea of evolution of the enemy into something new and almost intelligent. And with some of the issues around at the time, there are some interesting parallels. So - you haven't seen "Land of the Dead" yet, then?

These things are so very subjective. I'm with your wife on this one. However, the atmosphere bit sounds lovely!

Can I have time to think about that? ;)

so i take it you don't want the DVD with special features for Christmas then?

I've never seen the point in bigging up a film that you thought was rubbish. At least your readers know that they can trust you, when you say it was good. So many of these things are subjective anyway. What I think is great, another viewer may hate and vice versa.

So many people have told me about Shaun of the Dead now. I really need to get my hands on it and watch it!

I like your theories on what zombie movies are all about. I had a go at that myself too. It's over here: http://wizzley.com/why-are-we-afraid-...

George A. Romero's black and white original is THE classic zombie movie of al...

George A. Romero's gore-fest follow-up to his classic 'Night of the Living De... George A. Romero's black and white original is THE classic zombie movie of all time. If you've never seen it, then you should. You will probably be pleasantly surprised.
77%  10   7 JoHarrington
Zombies

George A. Romero's gore-fest follow-up to his classic 'Night of the Living Dead' has zombies milling aimlessly around shopping malls. It's often more comedy than horror.
Loading ...
Error!