A review of the 1953 movie starring Barbara Rush and Richard Carlson.

Synopsis: A writer and amateur astronomer witnesses a meteorite striking the desert near his home. When he investigates, he discovers the meteorite is really a spaceship but a landslide buries the evidence before anyone else sees it and, when he tells his story, nobody believes him, even as members of the community begin acting strange.

My daughter and I picked this movie for our father/daughter movie time and, when we started watching it, I wasn't really sure what to expect. I was sort of expecting it to be a horror movie. But, as it turns out, it was actually a pretty interesting mystery.

Basically, from the start, we know the meteorite was really a spaceship and the aliens inside the ship were loose. The fact they could also assume the form of humans they captured added an extra complicated element since it meant the writer's (Carlson) story would be much harder to prove, though the sheriff (Drake) did finally start believing him.

The part that was intriguing, however, was the aliens' intentions. Their ability to impersonate people put them in a good position to take over the world. However, based on their cryptic conversations, it was becoming clear that wasn't what they had planned. As a result, it was unclear whether they were there on a mission of peace or if they had some other, much more complicated, reason for being on Earth, at least until they finally explain it.

Another thing I liked about this film was the rising tensions as the truth was starting to get out, especially as the sheriff and others started questioning whether or not the aliens were telling the truth and debating whether they should try a rescue attempt or trust the aliens when they said they wouldn't harm the people they took captive. This did keep the film much more interesting than expected because it was hard to tell how the movie would end, especially since it created the possibility of a tragic ending rather than a happy one.

The special effects were a little lacking. However, the overall story was actually very entertaining and there was just enough suspense and mystery to keep the film from becoming boring. I might not have been overly certain about whether or not we would like the movie when we started watching it. But, it was definitely a movie we enjoyed watching and one I would recommend.

StevenHelmer, Thank you for practical information, pretty pictures and product lines.
The library system here does have It Came From Outer Space catalogued amongst its Blu-ray and DVD collections. So I expect to be including this film among the ones that I'll be watching after Lent ends.

How would this film compare to The Day the Earth Stood Still, the sci-fi film that I know from the 1950s? How would It Came From Outer Space fare as a colorized reboot or remake?

A review of the 1953 comedy starring Bud Abbott and Lou Costello. 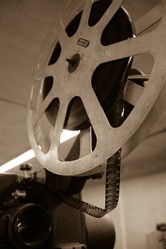 A review of the 1953 comedy starring Bud Abbott and Lou Costello.
Loading ...
Error!