A review of the 1956 monster movie featuring the Gil Man from Creature from the Black Lagoon.

Synopsis: A team of scientists track the Gil Man to the Florida Everglades and go on a mission to once again capture the creature so they can study it further. When the Gil Man ambushes them, they accidentally set him on fire and, because of the injuries he sustains as a result, they perform surgery on him and turn him into an air breather.

My oldest daughter and I ended up watching this movie last night primarily so we could say we watched the entire Creature from the Black Lagoon trilogy. While I did enjoy the second installment, "Revenge of the Creature," I honestly had some doubts about this particular film when we started watching it. And, as it turns out, those doubts were more than justified.

I think the biggest problem with this third installment is, unlike in the first two films, the Gil Man (played by Ricou Browning and Don Megowan) is essentially demoted to a secondary character. The earlier scenes in the movie feature a lot of scuba diving and the occasional cameo shot of the creature and, other than one failed escape attempt, he doesn't do much else once they make him a land creature.

In fact, if anything, the real monsters in this movie are the men that capture the Gil Man. This includes an abusive husband (Morrow) who gets jealous whenever his wife (Snowden) breathes wrong and a guide (Palmer) who doesn't seem to understand no means no and even attempts to rape Snowden's character. The movie writers apparently agreed with me on this considering they put so much emphasis on that dysfunctional love triangle.

It also doesn't help that the Gil Man was, much like in Revenge of the Creature, turned into a monster that was easy to feel sorry for. When he does do something, it's an obvious attempt to escape. And, given the fact he was living in an isolated lagoon minding his own business just two movies before, it's hard to find fault with that, even if he does end up killing one or two people in the process.

The filmmakers would have been better off ending the Gil Man's legacy after "Revenge of the Creature." This third installment of the trilogy just wasn't as good as the first two movies and really wasn't worth watching.

StevenHelmer, Thank you for practical information, pretty pictures and product lines.
The library system does have The Creature Walks Among Us listed among its Blu-ray and DVD collections. In fact, the film is paired in a legacy collection with The Creature From the Black Lagoon. So I expect to watch the two sometime after Lent ends.

What would you think of a colorized reboot or remake of the trilogy?

A review of the black-and-white western starring Neville Brand and David Brian.

A review of the 1956 science fiction movie starring Hugh Marlowe and Joan Tay... 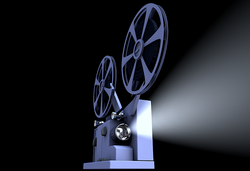