Before I even watched it, I was informed that 'The Hunger' is the Marmite of all vampire movies. You will either love it or hate it. There is no in-between.

It received a lukewarm reception upon its release, but has since made it to cult classic status. It's been accused of placing style over substance, and I could see that. It was made in 1983 and you can tell. It feels like a prolonged music video by the likes of Duran Duran or Spandau Ballet, only with a classical music soundtrack.

Plus naked lesbians having sex in lip gloss. It really is the early '80s in full vampiric glory.

The Hunger on DVD

What Happens to Miriam Blaylock's Lovers?

They stay by her side for centuries, then suddenly disappear. A terrible Fate awaits, unknown even to themselves. 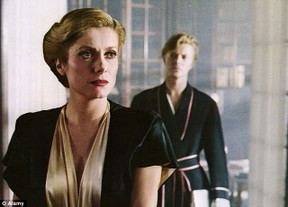 When Miriam met John, in 18th century France, she told him that he would live forever.   As a half-human, half-vampire hybrid, he survived two centuries at her side, drinking the blood of their victims.

But during the 1980s, in New York City, John discovers that Miriam didn't tell him the whole truth.  When he begins aging the process is rapid.  From young man to old man in a matter of hours.

It finally occurs to him to ask, if he cannot die, then what happened to her previous lovers and companions?  She grieves for them.  She misses them.  They too once aged rapidly, as he's doing now.  So where are they?

The answer is horrific.  More horrific the more you ponder it.  Miriam weeps for them all.

A solution may lie in 20th century medicine.  Dr Sarah Roberts has become a semi-celebrity for her work on blood and aging.  Plastered all over the television and publishing books on the subject, there is ample opportunity for her to catch the attention of both Miriam and John.

Can she save John in time?   Or will Miriam drag her more fully into their world instead?  Because Miriam cannot be alone.  She's a vampire who was born when Egypt was still young.  She'd get lonely, if she had to go on without a companion, whatever the cost.

I'm old enough to remember the New Romantic era of the early 1980s.

I was only eleven when The Hunger was released, but I was still into the whole look of it.  Lacy blouses to wear to school, with blue streaks of mother's eyeshadow in my hair. Duran Duran on repeat on the record player.

This movie vividly recalls that whole period.  The heavily stylized cinematography reminds me of a Duran Duran video.

The tropes are all there - the sheer material floating in the wind, the staged shots of people looking cool and glamorous, the sucked in cheeks and the propensity to wear sunglasses indoors.

The only thing missing is the music.  Bauhaus book-end the movie, singing over both the opening and end credits.  At one point, I distinctly heard a synthesizer.  Beyond that, it's classical music played practically from start to finish.

The Hunger on Blu-Ray

Sex, Violence and Lip Gloss in The Hunger

But both are filmed through that sleek lens so beloved of New Romantic grace. The camera may linger lovingly upon Catherine Deneuve licking Susan Sarandon's nipples, but it's all shot like a glossy magazine.

David Bowie worried that viewers would be put off by the bloody scenes, but they all seem small fry after the slasher movies of the late '80s.

The reality is that director Tony Scott focuses so much about ensuring each scene looks like a piece of art, that the pacing is sometimes a little slow.

The Hunger and AIDS

This movie is definitely a product of its time. The real world hysteria about AIDS runs as a backdrop behind the glamor and the style. 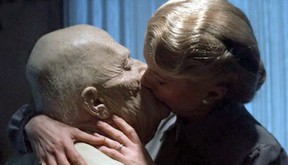 Some of the metaphors in The Hunger are so in your face, that you feel slapped by them.

One fine example is the constant cutting back and forth between Sarah discussing a test subject monkey in her lab, and David Bowie beginning his aging process.  It's not subtle.  We're talking about a monkey infected with a serum which causes premature aging.  We're looking at the identical thing happening to the human-vampire hybrid.  Got it.

But then you recall that AIDS began with monkeys.  It crossed species to infect human beings too.  It was an alien bloodstream, more dominant than that of a healthy human, fighting for supremacy.  A lot like the vampire blood introduced into the likes of John Blaylock.

AIDS is never once mentioned in The Hunger, but it's there anyway.  It's the only vampire movie I've seen where the emphasis is on alien blood destroying a young, virile human; where those transformed don't become full vampires, but retain half of their humanity.

Victims are picked up in nightclubs.  Gay sex can cause vampirism.  And monkeys have something to do with it.

If you haven't got the hint from the fashion and the filming, then this analogy would have dated this movie precisely.  AIDS first hit the headlines in 1981.  Warnings about it were everywhere during the next five years.  The Hunger was released in 1983 - a vampiric backlash against the horrors of AIDS.

The Hunger Does Pass the Bechdel Test

It does so consistently with dozens of scenes from which to choose. 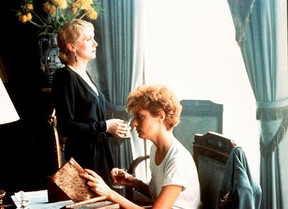 The Bechdel Test asks that two (or more) named female characters have a conversation, which isn't about a male character.  The Hunger passes hands down.

Sarah and Phyllis work together in the laboratory.  They discuss their research and draw conclusions from the results.  They also exchange banter while doing the paperwork.

Miriam and John are coaching Alice in playing the violin.  Miriam and Alice have conversations about music. They also discuss a dozen other things, as Alice enthusiastically shares details about her life, her photography and her family.

Then you get the long sequences between Miriam and Sarah.  This makes up at least half of the movie.  John gets mentioned in passing, but mostly they discuss Sarah's research and her future.  That is if they aren't making passes at each other and glamorously engaging in lesbian sex scenes.

The Hunger is also fairly unusual in the genre insofar as the main vampire is female. This is harking back to the very beginning of vampire legend and folklore, as well as tipping the nod to Christabel and Carmilla along the way.

The Vampirism of Coleridge's Christabel
There was undoubtedly a vampiric theme developing in Samuel Taylor Coleridge's 1797 poem 'Christabel'. But more significant was the vampirism inflicted on it!

Lamia: The Mother of All Vampires
The first vampires were all female. They were monstrous demigoddesses, who could not be killed, and they were firmly linked to infant mortality.

Lilith: Was Adam's First Wife a Vampire?
Before Eve, there was Lilith, or so some tellings of the story state. She fought with Adam and flew from Eden. Then entered folklore as a vampire or a demon.
Updated: 05/15/2013, JoHarrington
Thank you! Would you like to post a comment now?
10

Yes, I can see how well that would work. I'll look out for that movie, thank you. :)

Yes. It's a bit old. Made it back in 1995. Vampirism works mostly as a metaphor for drug addiction, with a mixture of (a little bit pretentious) philosophical pans and it takes place in modern day New York. Worths a watch.

it's a subtle touch, but there nonetheless. I haven't seen the Abel Ferrara movie. Is that another vampire one, which somehow skipped my radar?

It's been many years since I watched 'The Hunger' and back then I did like the movie. Especially the visuals and its stylized form. I think, though, I missed the references to AIDS or simply didn't pay a lot of attention. Perhaps the references weren't so explicit as in Abel Ferrara's 'The Addiction', for example. Thanks for the review. I guess it's about time I watched this again.

This was the early '89s. It was more an excuse for women-on-women scenes, under the veneer of being right-on about gay rights. :)

I'd call this movie many things, but a mess isn't one of them. If anything, it was over-polished. What else has Tony Scott done? I'm more familiar with Ridley. 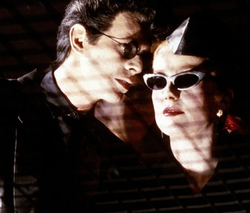 The legends go back even further than you may think. They are one of the most enduring monsters in our world. So what makes us so afraid of vampires?
100%  14   10 JoHarrington
Horror Movies