A review of the 1965 murder mystery starring Hugh O'Brian and Shirley Eaton.

Synopsis: A group of 10 strangers are invited to spend the weekend at a remote mountain mansion by a mysterious host. Shortly after arriving, someone begins murdering the guests, one-by-one, in gruesome ways inspired by a macabre nursery rhyme. After searching the house and finding nobody else, they realize one of them is the killer.

I came across this film on one of our movie channels earlier this week and, since I'm always interested in watching a good murder mystery, decided to record it and watch it while I was home for lunch. This, as it turns out, was a fantastic choice.

I've watched quite a few mysteries and, more often than not, I'm able to guess who the killer is after only a short time. This was one of the very few movies I've watched that actually managed to stump me. And, because of that, it was a very entertaining film.

The mystery in this film was both difficult and entertaining. The movie reveals, early on, that none of the 7 guests, the two house keepers (Marianne Hoppe and Mario Adorf) or their host's new secretary (Eaton) have ever seen or met the mysterious Mr. Owen. As a result of that, there are no clues about who he (or she) is that can help point to the killer.

In addition, the killer's motives are somewhat vague. We know Mr. Owen selected his victims because they all have skeletons in their closets relating to someone's death. But, other than that, there's no apparently connection between them and, if the killer is trying to get revenge for some past wrong, there's no indication about what that might be.

Another thing I found both entertaining and amusing about this movie was the way the various house guests continued to behave even as members of their party were murdered. There were times, especially toward the beginning of the film, when they were treating it almost as a casual occurrence. They would still sit down for formal dinners, would sneak downstairs in the middle of the night for a glass of milk (despite one person dying from a poisoned drink) and two of them even have sex with each other. Considering one of them was a killer and they were trapped (due to bad weather) inside the house, I would have expected a little more panic than that.

This is an entertaining classic murder mystery that I fully enjoyed watching. If you have not seen the movie (or read the book it is based off of), I would recommend it. 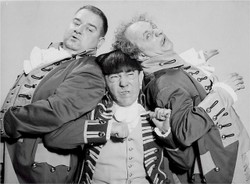