Synopsis: A pathologist becomes obsessed with fear and how the emotion can cause people to die. After conducting a series of experiments and discovers a parasitic creature that grows when people are scared and can only be stopped when someone screams. He captures the creature in an effort to study it closer but, in doing so, puts people in danger. 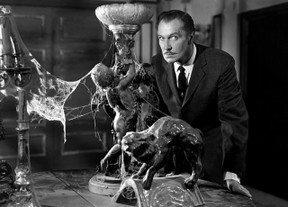 This movie was on my "to-watch" list for a few months so, when my oldest daughter and I finally had a chance to have another father/daughter movie night, we decided to give it a try. I had heard of the movie before but didn't know much about it. As it turns out, it was one of the better classic horror movies I've watched.

The film takes a little while to get started, with the writers building up the suspense up until the point he finally finds and captures "the Tingler." Once he does, the movie takes a pretty creepy turn as the creature escapes and starts to stalk people.

One thing that surprised me about this movie was the decision to show the monster. I figured we would only see glimpses of it, like when he first pulled the creature out of a corpse behind a curtain. However, the filmmakers made it a big part of the second half of the movie and, despite limited special effects, it worked. Even though it obviously wasn't real, it still had my daughter on the edge of her seat.

Another thing that impressed me was Judith Evelyn's performance as the death and mute Mrs. Higgins (something my daughter and I got a bit of a kick out of because she had a teacher with the same name). Since the movie established the creature could only be stopped by someone releasing their fear by screaming, I knew she would have some sort of major role in it. And, Evelyn did an excellent job selling the character, something that took quite a bit of skill considering she had to rely heavily on body language.

The part with Mrs. Higgins being frightened to death was also very interesting, both because we weren't completely sure what was going on (I thought she was hallucinating because of something Vincent Price's character did to her but was wrong) and we loved how the black and white film colorized the blood, adding a unique effect.

Since I didn't know much about this movie when we first started watching it, I admittedly had some doubts about it. However, the film turned out to be much better than expected and is a classic horror film I would recommend as a result.

StevenHelmer, Thank you for product lines, pretty pictures and practical information.
The library system here does not have The Tingler among its Blu-ray and DVD collections. So I expect not to be crossing this film off my to-see films any time soon.

Who would be able to interpret Vincent Price these days, and how would a colorized reboot or remake fare?

A review of the 1944 horror/mystery film starring Ray Millard and Ruth Hussey.

A review of the 1932 movie starring Bela Lugosi and Charles Laughton.
23%  1   3 StevenHelmer
Drama