A review of the 1945 Sherlock Holmes mystery starring Basil Rathbone and Nigel Bruce.

Synopsis: When a killer murders young women around London and severs their fingers after death, Sherlock Holmes is called in to investigate. While the common belief is the killer is some sort of maniac, Holmes thinks the murders are, instead, the work of villain Moriarty and are part of a much larger scheme the criminal has thought up.

Since I've have enjoyed most of the classic Sherlock Holmes movies I've watched recently, I decided to continue doing so. And, since this particular film happened to be on one of our movie channels early this morning, I ended up recording it and watching it before work. Overall, I have to say it more than met my high expectations.

This was the first classic Sherlock Holmes (Rathbone) film I've watched with the infamous Moriarty (Daniell). While I was looking forward to seeing him in classic film form, I was also concerned the fact he was the killer would ruin the mystery. As it turns out that wasn't the case at all.

While it's clear, from the start, Moriarty is the bad guy Holmes is after, his motives aren't as clear, at least not at first. His victims seem to be somewhat random and the gruesome step he takes, cutting off a finger, seems to have no real purpose. As a result of this, the movie turned out to be much more interesting just because I had to watch in order to learn the answers.

Also making this movie exciting to watch was the way Moriarty wasn't content with just letting Holmes figure out his plans. Instead, he proactively goes after Holmes in an attempt to kill him. This did create a surprising amount of suspense because he had plenty of henchmen who were able to help him carry out that plan.

Probably the only thing I didn't like about this movie was the narration by Inspector Gregson (Matthew Boulton). Movies like this are better if they are introduced in a way that allows the viewer to know what is going on first-hand. While it didn't ruin the movie, the unnecessary play-by-play was a little annoying.

As I mentioned, I could have done without the narration. But, overall, I thought this was a decent film with a good mystery and plenty of action. I would recommend it.

StevenHelmer, Thank you for practical information, pretty pictures and product lines.
This is one of the Rathbone films that I've not seen of him as Sherlock Holmes. I recall no such instance of other than Holmes or Watson narrating. Why would the film decision-makers have had Inspector Gregson narrating?

A review of the Sherlock Holmes movie starring Basil Rathbone and Nigel Bruce. 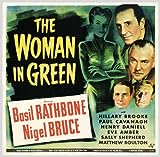 A review of the 1946 comedy starring Bud Abbott and Lou Costello.
44%  1   6 StevenHelmer
Mysteries

A review of the 1946 mystery starring Basil Rathbone and Nigel Bruce.
Loading ...
Error!