I peered out the window and waved to my father. He was standing on the runway as our plane taxied away and prepared for take-off. It was 1954 and I was 7 years old and traveling with my mother. It was her first trip back to Rome to see her family since the end of WWII. It was my first trip to Rome ever.
I didn't know why Dad wasn't coming with us. It was 60 years later before I got around to asking him. He said he was taking some college courses and admitted that money was an issue. He was a school teacher and just sending the two of us to Rome was stretching the budget.

Airplanes in 1954 were not terribly luxurious. The seats were hard and there was no air conditioning. We had a vent that we could pull down for some fresh air. Smokers could light up making the air even more noxious. I seem to remember that it took several days and several stop-overs to reach Rome. Time has dimmed the memories of that trip, probably for the best.

A group of strangers, all speaking Italian, met us at the airport in Rome. We piled into a car and drove to my grandmother Nonna's apartment. I'm not sure what I expected, but I was rather surprised to see a tall apartment building surrounded by a brick wall set down in a cement courtyard.
Everyone trundled up the stairs and then wanted to hug and kiss me and pinch my cheeks and speak Italian to me. My mom translated when she could but she was busy trying to talk to everyone at the same time.
Later in the summer, I abandoned the company of adults in favor of playing with the other kids in the courtyard. I learned to speak credible Italian by the end of the summer.  I learned to count by playing jump rope and hopscotch. There was no one who spoke English and no one to translate. I just had to learn Italian.

After the adults talked and caught up on seven years of news, things settled into more or less of a routine. I adapted to the strangeness of having soup for breakfast and the wonderful shower with a built in shelf for sitting. I more or less got used to my aunt and uncle pinching me all the time. 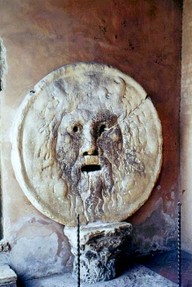 Mom started on her campaign to take me to all the historical sites in Italy. We gazed at fountains, the coliseum  catacombs, St Peter's Square, cathedrals and the Appian Way. She teased me when we visited a church yard where there was a stone face mounted on the wall. The mouth of the face was open and she told me to put my hand in the mouth. If I had told lies, she said the mouth would close on my hand. I thought she was crazy. There was no way I was going to put my hand in there.

Mom marched me through the streets of Rome seeing all the sights. She told me that she had strong legs from growing up there and walking up and down the hills during her childhood. I was of the opinion that it was too much like work. 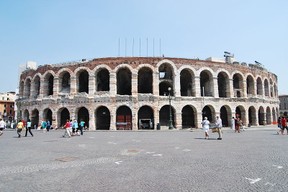 We traveled north, to Verona where my grandparents had originally come from. We went to see operas in the arena. I promptly fell asleep on the hard, stone seats. As much as I admire opera now, I'm afraid it still has that effect on me.
A man who was with us, a relative I presume, sang songs from the opera as we walked home down the narrow streets. His strong voice bounced off the buildings in the late night after the opera but no one seemed to mind.
Photo Source

Venice and the Sea 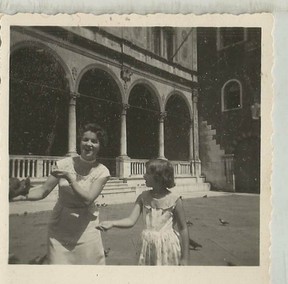 We visited Venice and rode in a gondola and fed pigeons in the square. I was riveted to the spot when I was told that the statutes on top of a building would move and strike the bells every hour. I imagined that they would come to life and lift their arms and hammers and bring them down on the bells mounted next to them. I felt gypped when the statues just pivoted on their bases.

We went to the south and visited a cousin who lived near the Mediterranean. We went to the beach and I saw the whitest sand and the clearest blue water I had ever seen. I also got the worst sunburn I've ever had before or since.

We went to the mountains. I don't remember who we visited there, but I loved the gentle brook and smooth stones. I loved to wash the stones and see what magical colors they changed to when wet.
My mom was mortified. Children in the mountains had to work from a young age to help support their families. Children collected firewood and picked wild plants for food among other tasks. I was a tall girl and looked older than my seven years. I happily washed rocks while strangers wondered about my mental capacity

One of my best memories was having lunch at a roadside cafe high on the side of a mountain. There was a patio covered with a grape arbor. We sat in the shade in the cool breeze and ate and the adults had wine. Everyone told stories and jokes and sang. There was a lot of laughter and I was content, even if I didn't know what they were saying. To this day I  long for a place to plant grapes. I'd build an arbor and put tables and chairs under it.  I'd invite my friends to sit under it and drink wine and tell stories and sing and laugh.

Two memories stand out as the end of summer approached. One young girl who lived in the apartment building in Rome, said that at a certain time of day, a picture of the street outside would be projected on her wall. I simply had to see this. It turned out that it was true. At the appointed time of the afternoon, we all went into her living room and she closed the wooden shutters. The room was dark and on the opposite wall was a huge, upside down image of people walking on the street outside. After a few minutes the image faded. I learned later that there was a tiny hole in the shutter and the room became, in effect, a huge pin hole camera. 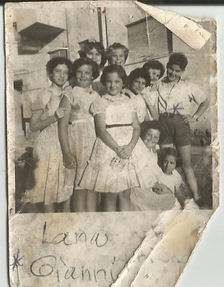 As the time grew closer to leaving, I put on a puppet show for the adults in Nonna's apartment. I made little puppets out of cloth and one thread for each. I painted a cardboard box to make a stage. I don't remember what the story was but I'm sure I made it up as I went along. What really impressed my mother was that I did the entire thing in Italian. She had no idea that I had adsorbed so much of the language in such a short time.
All too soon we made the return trip to Texas and I went back to school. Within a year, I had forgotten all the Italian I had learned, but I never forgot the trip and the memories - especially my mother and sweet Nonna who made soup for me for breakfast. 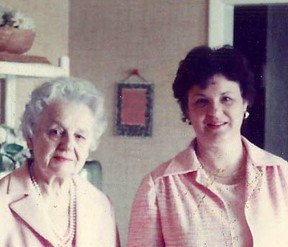 Thanks very much for reading and commenting. It's appreciated.

Lovely read, thanks for writing!

Why thank you. It was a wonderful time. I'm so grateful that I got to meet my relatives before they passed away.

Thank you. Ha, I'm old enough to remember when B&W was all we had!

Very beautiful memoir. I really liked the use of b&w photos. Along with the text you feel like traveling yourself to someone else's memories.

Thank you so much. It is encouraging to know someone likes your writing.

I really, really enjoyed this. I loved it. Seeing such a trip through the eyes of both the seven-year-old you were and the woman you are now is truly wonderful. Thank you so much for sharing!

What wonderful memories to have.

It was indeed. Thanks for the kind words. I'm grateful I got to go when I did.

Love is the Key… to Verona

Verona is undoubtedly Romeo and Juliet's city... but not only!

Visiting Italy is a dream of many...but is it too expensive to turn into a reality? Not necessary. Read on for my tips to enjoying an Italian vacation on a budget.
100%  12   10 MikeRobbers
Italy 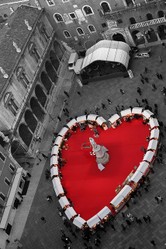 Love is the Key… to Verona

Verona is undoubtedly Romeo and Juliet's city... but not only!
Loading ...
Error!