Nativity sets are popular during the Christmas season, but adding santons is unique to just a few places. It is a practice well worth considering.

In the thirteenth century, people were shown image, such as stained glass windows, to teach religious lessons. This was a three dimensional image, and could be placed in storage between Christmas seasons. It served an educational purpose.

Of all the Christmas decorations, the Nativity Set is the one that gets to the heart of the meaning of Christmas.

A traditional Nativity Set shows the Holy Family, Mary, Joseph, and Jesus.  The Jesus figurine is sometimes withheld until Christmas Day, especially in a Nativity set on display in a church.

Other figures are often those representing the first to visit Jesus.  They include shepherds and their sheep, angels, and animals representing those animals that lived in the place of Jesus’ birth.

The three kings who came via caravan and their camels are sometimes placed on the Feast of the Epiphany, January 6, although their arrival was probably delayed about wo years due to the length of their journey.

So, a normal Nativity Set is a crèche with the normal figurines.

In Provence, France, there evolved a tradition of making the Nativity Set more personal.  Figurine, called santons, are added to the display.

Santons, which is translated “little saints” are figurines representing people in various occupations.  The point that is being made is that a saint can come from any occupation.  The santons used are based on the occupation of a family.  When the practice began there would be but one occupation, but now there may be two.

Of course santons would not be appropriate if placed at the crèche.  So, additional buildings, animals, and other figurines had to be added.

Apparently, there are people in Provence who make these, even today.

A Nativity Set Display I Have Seen

A long time ago a priest, Father Karl, invited me to his small Christmas gathering.  It was in the rectory, and about six of us were invited.  In a nook he had his Nativity Set, or what he called the town of Bethlehem.  There were quite a few figurines and several buildings.  He explained that he bought the display little by little during visits to Rome.  Perhaps this was not quite the santons of Provence, France, but could be considered to be in the same idea.

The year I saw this set was the year before I got married.  Father Karl was invited as a guest, but showed up and began to put on his vestments.  I explained the priest from my wife’s parish was to be the celebrant, but he said when a priest is invited to a wedding he concelebrates.  So, he was my second priest for the ceremony.

Fontanini makes a quality Nativity Set, and there are many pieces beyond those traditionally used.  We have one, and it can be added to whenever desired.  The only thing we need to consider is whether the added pieces are comparable in size.

These are not santons.  Santons are of terra cotta, not wood, and dressed for the period two centuries back, not two millennia back.  And, not as many occupations of today are represented.  But, it does embellish the display to have the extra pieces.

This is one of the Via Crucis stations ...

What a lovely thought. I could have written an article about the entire valley - Val Gardena - except my old computer caught fire and died - and so did all my photos.

My main theme though would have been the "Stations of the Cross" which have been carved out of trees and wind their way up the hillside through the woods above the valley. Beautiful. And who was our walking partner on this Catholic Stations walk? A Baptist minister staying in our hotel. He wanted to follow the Way of the Cross. A lovely memory, a delightful, humble man.

Perhaps you could write an article on the San Cristina Nativity set.

Reading this is bliss for me as I love Nativity sets. I have seven dotted around the downstairs rooms at Christmas including 2 small ones hanging from the tree. One stands permanently all year round in my fireplace recess. People who comment about me having a Nativity up all year round don't have to stay.

Thank you. I had never heard of Santons - but I love them. What a charming idea. I shall look into this.

I saw my favourite Nativity set in San Cristina Italy. It is larger than life size and stands all year round in the town square. Stunning. If this were in UK it would have been vandalised by now. It took three years to carve one camel! Imagine me - a Nativity addict - turning up to an Italian village one summer a few years ago and finding this.
Google San Cristina Italy Nativity Set.

Enjoy a little equine rainbow magic on your Christmas Tree this year, with fe... 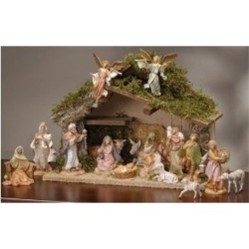 Gumdrop Christmas trees are a great alternative to a traditional tree, ideal for small spaces, and can be a Christmas memory your children will cherish for years to come.
100%  16   9 JoHarrington
Christmas Decorations