A lot of the new Nerf lines focuses on quick shooting and battery-powered action. But most kids, gets bored always asking mom for batteries

The Nerf N-Strike Longstrike is surprisingly accurate and is a fun, single-shot gun that holds its own in those all day Nerf games.

If you are a player that is interested in accuracy and taking down your nemesis before they get close, this gun is one you should look at. It can shoot further than most other guns and should definitely be present at any Nerf game.

In a Semi-Automatic Nerf World, The Longstrike Holds its Own.

The Nerf Longstrike is part of the N-strike line, the same line that the Nerf Wii game comes from!

When you are playing with the Nerf Longstrike you are likely going to be playing an outdoor game -- or at least one where greater long range accuracy is a prime concern.  Thanks to its ability to shoot darts accurately at distances over 30 feet, you can even use this gun in long-range games  against a Nitron or other semi-auto weapon.

Sure, the Nitron is fairly accurate, but its XLD discs do rely more on simply laying down a terrifying amount of green Nerf power to allow you the time to get closer to your opponent.

The Nerf Longstrike, is going to rely more on its one-shot one-kill technique to reach the opponent before they can reach you.

The Nerf Longstrike has a fun real-gun feel to it that gives the shooter a lot of control and is a lot of fun to shoot.  Plus, its higher accuracy tends to make Nerf games a blast as you actually can reliably hit your opponent -- and catch them by surprise!

The Nerf Longstrike also allows for unlimited modifications with its 4 ample tactical rails allowing you plenty of room to add unlimited Nerf accessories to match your game-playing style and give you the ultimate edge over your competition.

And, if do find yourself in tighter situations where you need to move and shoot more aggressively, you can detach the front barrel and just use the shorter main body.

The shoulder stock allows for more control of the gun. The shoulder stock is included and is optional. However, once you add it, it cannot be removed.  I personally enjoy my Nerf guns that have a stock as I think it adds to their realistic feel.  You might let the child try the gun without the stock first, as younger children may find that the stock is too long for their arms.

The gun is super-easy to shoot.  You just plunge it to prime and and  However, since it is a larger gun, you will find that kids tend need to be just a little older to really appreciate it.

The Longstrike can hold 2 extra clips in the shoulder stock to expand your ammo range.  And, since it is compatible with the rest of the Nerf N-strike line, if you have a gun such as the Raider which uses a drum magazine, you should be able to use that massive magazine with the Longstike for all-day shooting.

A Focus On Accuracy

Some people won’t like the fact that the Nerf Longstrike is a one-shot gun.  However, it really goes a long ways to make up for its slow shooting with its much improved accuracy.
Especially for those who enjoy outdoor recreational Nerf games, the Nerf Longstrike is a perfect answer to any battle.  Team up with a player Nerf Nitron or, preferably,  Nerf Raider Rapid Fire which combines rapid shooting with high accuracy.

Amazon Has Pretty Good Prices On The Nerf Longstrike

Mod the Longstrike to Take it to a Whole New Level!

I see All-Day Nerf Battles In Your Future

It's Time For Nerf Wars!

Sure, those semi-automatic guns are fun, but for those who get tired of having dead batteries and Nerf guns they don’t use because mom hasn’t bought them new batteries, the N-strike series, such as the Longstrike,  answers the call.

But whatever gun you go with, be sure to get out and enjoy the sunshine with your Nerf-shooting friends. 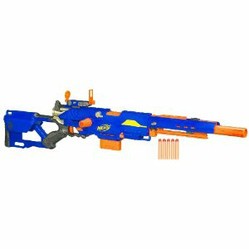