A look at Nicki Minaj in her Grammy Performance as well as some bio information.

Nicki Minaj put on a very theatrical performance for the 54th Annual 2012 Grammy Awards. Her walk down the red carpet was just as much of a jaw dropper as her performance. She went through a lot on this one night. She levitates, had a crazy fit during confession, and went through an exorcism all in one night. All the while she is sporting her new MAC Viva Glam Pink Friday lipstick. Watch out Lady Gaga. Here comes Nicki Minaj.

Nicki Minaj has been the talk of the Grammy Awards this year. Some people were in complete shock as she showed up on the red carpet dressed in a custom made, scarlet red, Versace hooded cape dress. The dress was not so crazy. Ok.. it was a little crazy looking. The crazier part was her being escorted by someone dressed up like The Pope. It really got a lot of people talking and wondering what in the world could she be thinking.

The performance debuted her new album and new song “Roman Holiday”. The performance starts off with her in confession to the same man that walked her down the red carpet. The dancers and back up singers were all dressed in monk outfits. She delivered a scary performance where she is levitated and has an exorcism performed on her after she almost eats a tube of pink lipstick. You have to see this performance to believe it. 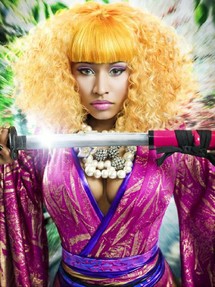 Nicki has had many alter egos over the years. This whole performance at the Grammy Awards was by her alter ego Roman. His name is Roman Zolanski. “He is the demon inside me”, she says. She becomes Roman when she is angry. Roman also has a mother named Martha Zolanski that comes out in other songs and videos.

Nicki had a horrible childhood. It was filled with constant drama as her mother and father were constantly fussing and fighting. Her father did drugs and was an alcoholic. He was very abusive to her mother. One of the ways that Nicki got away from this was to create alter egos and live through them instead of her own miserable life. One of her first alter egos was “Cookie”. The most famous alter ego is Nicki Minaj. She was actually born Onika Tanya Maraj. She would live through                   fantasy to escape her reality. 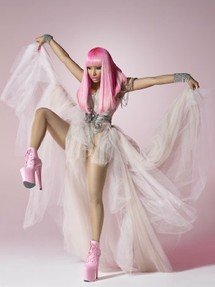 Nicki Minaj was born December 8, 1984 in Trinidad as Onika Tanya Maraj. She moved to Queens with her mother and father at the age of 5. She had a very dramatic childhood living with constant drama. Her mother and father would fuss and fight all the time while her father was an alcoholic. She would create different personalities to live through to get her away from the craziness of home life.

Nicki was involved in music in middle and high school as well as drama classes.

She has a tatoo on her arm written in Chinese. It translates to “God is always with you”.

Nicki was discovered by Dirty Money CEO on MySpace. He signed her to his label and the rest is history. Lil Wayne noticed her and also worked with her on many different projects.

Nicki's debut album Pink Friday was released in November of 2010. It was #1 on the US Billboards. It went Platinum within 1 month. She had 7 singles from that album on the Billboard at the same time. She has been the only artist to accomplish that. She was also the 1st female to reach #1 on the Billboards Hot Rap Songs unaccompanied since 2002.

Her second album Pink Friday – Roman Reloaded is just being released with her debut of Roman's Holiday debuting at the 2012 Grammy Awards.

Nicki Minaj and Ricky Martin have teamed up with MAC Cosmetics to raise money for HIV/AIDS Awareness in Latin America. They are promoting MAC Viva Glam cosmetics with Ricky promoting lip conditioner and Minaj promoting her new lipstick shade called Pink Friday. All of the proceeds from these products go to support the activities raising awareness of HIV and AIDS in Latin America. Minaj had an uncle that died from an AIDS related illness. So this hits home hard for her. The lipstick was made available in November of 2010 and was only released to sell on every Friday for the next four Fridays. You can still find it in very few places at a premium. Amazon has a few tubes left at over $100 per tube. My comparison of the color is that MAC's Snob is the closest color to Pink Friday at a much cheaper price. She also has her own Viva Glam shade with MAC called Nicki Minaj. All are great shades to try. Pink, Pink, Pink. 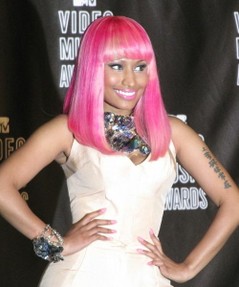 Nicki Minaj is a female rapper which makes her unique within the music industry. There are not many straight up female rappers out there. I have to hand it to her for that. She has done a great job hanging with the guys when it comes to rapping. Her style is also one of a kind. Her wigs and lipstick are definitely out there. Pink and blonde wigs seem to be her favorite. Pink Lipstick is the only color I have seen her wear. I mean bright pink. She reminds me a lot of Lady Gaga in that she knows what to do to get the attention needed to be successful in the industry. You either love her or hate her. There is no in between with Nicki Minaj.

@janices7 - I am not much of a fan either. I just find her fascinating.. kind of like Lady Gaga. The things that people in the music industry do to get attention cracks me up. Thanks for reading and commenting.

Saw the performance and I wasn't really a fan. That said, she is an interesting character and some of her music is fun.

Katie - I hear you. I really don't care too much for her. She fascinates me with her craziness. But that is about it.

I don't really get Nicki Minaj's on stage, I like a her work when I'm not looking at her but she's trying to hard, dance moves, no she ain't got it.

Lana Del Rey has managed quite a cult following with her unique voice, unique... 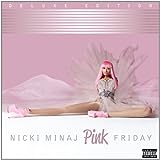 Lana Del Rey has managed quite a cult following with her unique voice, unique music, and powerful lyrics. She's worth listening to.
45%  6   4 BardofEly
Music Stars

Bob Dylan has inspired countless writers and performers in the world of music and poetry as well as many imitations. He is one of the most influential singer-songwriters ever.
Loading ...
Error!