We have used Norfolk Island Pine as a Christmas Tree for the past four years, our challenge is keeping it alive until the next holiday season.

The Norfolk Island Pine is actually a large house plant or tree that has the potential to live a good long life. With proper care, we hope our tree will stay green after Christmas for as long as possible, and be decorated for other holidays throughout the year.

We have had "real" cut trees and artificial Christmas Trees during the years our children were growing up, but decided to downsize to a good sized Norfolk Island Pine when the children moved out. Our house is small and this alternative is a good one for us.

Where is Norfolk Island?

The Island where the trees are originally from is Norfolk Island. They grow to be quite large on the Island. Norfolk Island is a small island east of Australia.

A very small island in the Pacific Ocean East of Australia

How to Care for a Norfolk Island Pine

Tips and video follow, and links to other helpful resources

I visited many sites about Norfolk Island Pine care, and the same general theme ran through all:

Above are the basics, but there were a few different tips on feeding, etc., at different sites. I've provided you with a few links to help you...and me...as I do my best to keep this pretty Norfolk Island Pine alive.

Here are some links that will provide more information to help you in caring for your Norfolk Island Pine:

Norfolk Pines, How to grow and care for a Norfolk Island Pine tree

How to Manage and ID Norfolk-island Pine

I think you will enjoy the video by an expert below as well.

Caring for a Norfolk Island Pine on Video

"The trees are God's great alphabet
With them He writes in shining green
Across the world His thoughts serene."

We used small light ornaments, and no lights. I frame the doorways with indoor Christmas lights instead

Do You Use a Live, Cut or Artificial Tree?

I'm putting "Live" and "Artificial" together as they both don't require cutting down a living tree. There may be positive reasons for using a cut tree, if you feel that there are, share them.

We use an artificial or a live tree, either a Norfolk Pine or another type we can plant outside later. Here's why:

I have used both.

I have a tiny pre-lit tree that I set up.

We buy a tree that is already cut or go out and pick one and cut it ourselves. Here's why:

Until recently, we always went with a cut tree, either off the family farm, or from a tree lot. The past several years, we have changed over to a pre lit artificial one. It's just the two of us now, so no little ones to make a fuss for.

Where to Buy a Norfolk Island Pine

I purchase mine at a local store in my Town that has a very nice garden center. If you don't have them available in a store near you, perhaps purchasing online will work for you.

How long did the Norfolk Island Pine survive?

My 2010 - 2011 tree met an "early demise" in late April, but gave us more months of pleasure than a "real" cut tree would have. I think it was the constant rain and grey days we had, it sat under a skylight, which was fine if sunny, but not enough without. 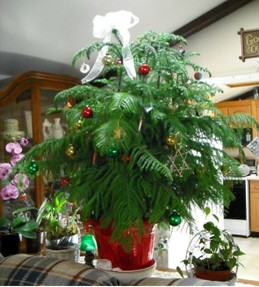 In 2010 the price I paid was less, at least where I shopped, than I would have paid for a real cut tree, so we did purchase another Norfolk Island Pine in December of 2011. Sadly, that Norfolk Island Pine did not make it past April 2012 either. If I had known how mild our winter and spring would remain, I would have put it on our back deck when it started to die off.

The story was the same in 2012-13 and 2013-14. We simply have not had mild enough weather to get the tree out on the deck in time for it to survive. It has to be 45 degrees and above, and it seems that April is as long as the trees will live for us.

I am thinking of building a simple green house with clear heavy plastic and a simple frame to use in the spring to start plants, and this may be perfect for future Norfolk Island Pines. In the meantime, for the past couple of years at this 2016 update, we have used a small artificial tree....but it's just not the same.

They have to be light weight ornaments

As you look at this video, you'll see some Norfolk Pine. They can grow to be very large, as you can see, and sparser looking than the ones I have had.

Guestbook: Say hello or ask any questions you may have about Norfolk Island Pines

I am not sure this year, we shall see, I did buy a little artificial one at the last minute last year as we were dealing with a crisis that made Christmas less jolly, but it still was a good day to remember Christ's birth...we'll see what this year brings.

Nofrolk Islalnd Pines sure are pretty. Good luck with yours this year, if you decide to go that rout again.

@MBS Oh how fortunate to have had one last that long. That could also be part of the challenge here, we heat with wood and so the house gets very dry in the winter, I mist the tree 2 times a day.

@dustytoes That must have been a wonderful price as they are already so reasonably priced.

I had a Norfolk Island Pine for a Christmas tree many years ago when I lived in "wet" Iowa - now I'm in "dry" Colorado and the pine is long gone. But I did have it for several years and I did decorate it during the holidays.

I love the little Norfolk Island Pines. I used to work in a store where we sold them and I'd get one at a discount each year, which was fabulous.

@WriterArtist I try hard each year, I think making a small simple greenhouse on the deck, something I have wanted to do, is going to be the answer. Thanks for the wishes!

I wish the Norfolk Island pine tree lives for many years and you celebrate every Christmas with it. It is full of life - bright and cheerful. 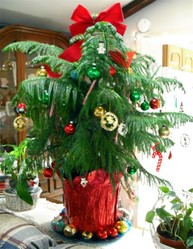 Many travel the country roads of New England leaf peeping in the fall when the colors are beautiful, but New Jersey is also a beautiful place to enjoy fall foliage tours.
56%  6   4 happynutritionist
New York

Christmas is one of the most beautiful times to visit New York City, NY as the City that never sleeps really puts on a beautiful and colorful show of lights and events.
Loading ...
Error!