Not Your Normal Things to Do With a Crock Pot

I recently bought a new crock pot and have been cooking in it daily. Here are some things you might not have realized that you can do with a crock pot.

I have to admit that I am a very distracted cook. I either get in a hurry for things to cook and eat them not quite done, or I get bored and wander off to the computer or a book forgetting about what is on the stove until it starts to burn. When I use a crock pot, I know from the start that it is going to take a long time, but I don’t have to worry about it burning.

I wrote recently about my rice cooker that I bought thinking it was a crock pot. Well, I finally got a real crock pot. I don't have a working oven so the crock pot fills the gap.
I found a small crock pot, 1.5 quarts on sale at the grocery store. It doesn't have any settings and stays at about a medium-low temperature. If you have more settings, you can experiment and see what works best for you. 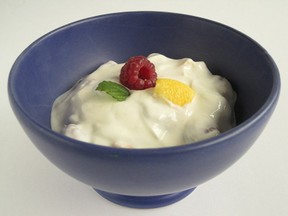 The first thing I wanted to try with my crock pot was making yogurt. I used to make yogurt years ago when I had the perfect place to let it sit. I had a small pantry that had a water heater in it. It was just warm enough for the yogurt mix to do its thing. I’ve tried making yogurt in a thermos which does work, but I don’t have one big enough to make it in a large enough quantity to last for a few days. The crock pot is perfect. I can make two or three cups at a time which is enough to last me a few days. To do it right, you really need a thermometer like the one shown below.

Put 4 cups milk in the crock pot and heat to about 180 degrees.

Put the crock pot in the oven with light on, or cover with a couple of towels to insulate and let it sit overnight or several hours until firm.

Save ¼ cup yogurt for a starter for your next batch.

Mix in your favorite fruit, honey or whatever you like. (I used some leftover fruit to make a fruit fool and added to yogurt. Delicious!)

All the recipes I’ve ever seen for beans in a crock pot called for canned beans. I tried cooking dried beans once in a crock pot but it was a dismal failure. I thought you couldn't cook dried beans in a crock pot. My new neighbor does it all the time so I was inspired to try again. She doesn’t pre-boil them; she just washes them and dumps them in the pot. She lets it cook overnight and into the next afternoon. I tried it and it worked like a charm. In the morning I added onions, some stock for water and some left over meaty bones for flavor. It was absolutely the best beans I have ever made. It's very good with rice from the rice cooker too. 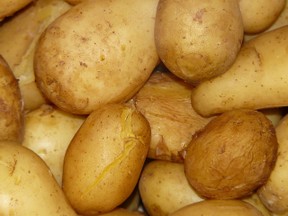 This might not take as long as you would imagine. The size of the potato will determine how long it takes so poke it with a fork from time to time to test for tenderness. Some people rub a little olive oil on the potato.

Cook in Crock Pot until Tender. 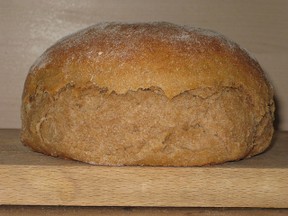 This won’t give you the crispy crust that I love, but it makes quite a decent round loaf of bread.

You can use just about any bread recipe in a crock pot. It’s very much like using a bread machine except that it doesn’t mix it for you. I dislike getting dough all over my hands so I’ve been kneading it either wearing plastic gloves or, lacking that, putting the dough in a plastic bag.

My first attempt was a no-yeast bread, only because I was out of yeast. I had never seen a recipe that called for both baking soda and vinegar. I think that had something to do with it rising. It’s still pretty dense bread but I happen to like it. I haven’t done yeast bread yet but I did buy some yeast. I realized later that I didn’t add any salt which is usually in a bread recipe. To my surprise, it tasted fine without it.

water to make a dough about 1 cup

Knead into a ball.

Put a small sheet of tin foil to cover the bottom of the crock pot and set your ball of dough on it. Cook until done.

Do you have other unusual uses for a crock pot?

I would have to muster up courage to try to make yogurt in a crock pot. But I learned that trick with dried beans a long time ago. Way easier than how my mother used to cook them. Baked potatoes in a crock pot? Genius!! :)

Thanks. It's amazing how much better I cook when I use my crock pot.

These tips really do come in handy, what a great reminder.

The beans are the BEST. Yes, Starting stuff early and not worrying about it burning is just the greatest. I love my little crock pot!

I love that baked potato idea. I always run out of time to bake my potatoes, but I could start them early in the crock pot. I bet those beans are really good too.

I didn't realize you could do these things with a crock pot. I love yogurt, but don't buy it much anymore, because it has gone up in price so much. Now I can have all I want.

Mmmm you're so right about that smell. I've got some good soup on right now
!

I love my little crock pot. I love knowing I'll have something good to eat in a few hours.

This is the perfect time to drag my crock pot out of hiding. Thanks for the great tips on using it in varied useful ways. :)K

I had never used a rice cooker before. This is one small appliance I wish I h...

Gooseberry Fools and Other Fruits

Have you ever bought berries that were so sour that they puckered your mouth?... 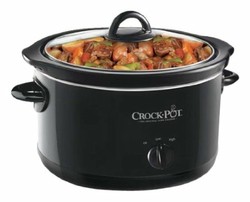 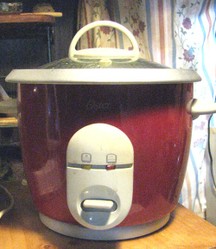 I had never used a rice cooker before. This is one small appliance I wish I had bought a long time ago.
70%  10   6 Ragtimelil
Fruit Desserts 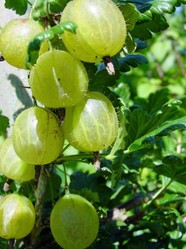 Gooseberry Fools and Other Fruits

Have you ever bought berries that were so sour that they puckered your mouth? I just had some blueberries that I couldn't eat. I solved the problem by making a Blueberry Fool.
Loading ...
Error!