Love him or hate him, Oliver Cromwell is the most divisive man in English history. This week, I "bit the bullet" and visited his home in Ely, Cambridgeshire.

Did visiting his house change my opinion of him? Read on.

In my opinion, Cromwell was a hypocrite who became a ridiculous parody, a caricature of everything he despised - an anti-monarchist and Puritan who went on to become King in all but name and drank beer and smoked a pipe at home.

I was very reluctant out of principle to visit his house but out of interest and in the need for balancing opinion, I went along. The house is still standing, beautifully preserved in Ely Cambridgeshire, a charming old house dating back to the 1500's.
It was certainly a family home and had Cromwell restored the celebration of Christ-tide
(Christmas) which had been banned in England in 17th Century then I think his children would have enjoyed it.

Let's take a look at Cromwell and then his house.

The photos are my own as ever.

Ely is in Cambridgeshire, North of Cambridge.

Cromwell, Lord Protector of England in a nutshell

Oliver Cromwell 1599 to 1658 was a nephew descendant of Thomas Cromwell, King Henry 8th's advisor. Although born into a gentry family they were not overly wealthy at first.

Cromwell was born in Huntingdon but lived in Ely, Cambridgeshire with his large family of wife Elizabeth and nine children. He underwent some sort of zealous religious Puritan conversion and after becoming a Member of the English Parliament began to distrust the king stating that he was introducing Catholic ways into England. This was untrue. He also objected to the way that King Charles governed without Parliament's support.

Cromwell's armies opposed the King and Civil War started in 1642, culminating in the English Civil War finishing with the execution of our King. Cromwell became Lord Protector of England and had his servants call him Highness. He also put his children and children's husbands into high positions. His daughter Bridget 's husband Henry Ireton was given control in Ireland and when he died her next husband Charles Fleetwood, was given control of Ireland. When Oliver Cromwell died his son, Richard Cromwell was named as successor just as a King would have his son follow him, so did Cromwell. So much for anti monarchy!

Much is made of the fact that it was Parliament and not Cromwell who banned the celebration of Christmas in England but Cromwell was the Lord Protector and did nothing to reverse the decisions. He was fully complicit. He did not like the word Christ'mas' because the word had Mass in it which he associated with Catholics. He hated how Christmas was celebrated with eating, drinking and feasting.

He was vicious in Ireland and during his reign 41% of the Irish population perished. Compare this to less than 1% of the English population killed in World War 2. Despite being a devout Puritan, he wasn't opposed to slaughtering and executing people who got in his way.

When the English monarchy was restored in 1660 with Charles 1st's son Charles 11, the new King had Cromwell's body dug up and his skeleton hanged.

Inside the house we stepped into a little reception and quaint gift shop where we greeted by helpful and charming staff. The cost was very small and reasonable for what the attraction was - only £5.00. Turning left through the door we entered Elizabeth Cromwell's kitchen and it was set out as it would have been in 17th Century. Elizabeth wrote her own household management book. Mrs Cromwell's Court and kitchen of Elizabeth Cromwell.

I always like seeing the kitchens of old houses such as this.

.… and eels? well this is why the place is called Ely.

Just look at the fireplace in the kitchen

a family feel to it

Through the door and up the stairs we came to the family rooms full of games, dressing up clothes and Cromwellian helmets.

The statue here moves as it sits at the desk.

It is a lovely family house that's for sure with excellent, kindly staff.

My feelings are unchanged though. I regard Oliver Cromwell as a dreadful man and seeing the place where he lived out his family life hasn't changed my opinion when balanced with the totally evil things he did. I don't believe the age they were living in justifies his actions.

Go and visit Cromwell House and decide for yourself.

Correct spelling only became important in Britain during the last century.
Given that the population of England was tiny at this time and most people were very poor peasants, it is unlikely that there would have been more than one titled and gentrified family in the same vicinity. They would be related and therefore, I suggest that you are indeed a collateral descendant of the tyrant Oliver Cromwell.

How good is that!

Look at a map of the old English counties, which will show that Nottinghamshire, Lincolnshire, Huntingdonshire,Norfolk and Northamptonshire are all in the same vicinity. So movement between these places would have been easy.Sometimes these are known as ceremonial counties to distinguish them from the modern administrative counties. For example, Veronica and I dwell in the administrative county of Greater Manchester,but she dwells in the ceremonial county of Cheshire, while I dwell in Lancashire, as I am north of the river Mersey,whereas she is not.

The first recorded Cromwell was a lord of the manor of the manor of Cromwell. According to English rules he would not have been entitled to call himself lord, and he belonged to what we know as gentry rather than aristocracy, who were one step above the gentry.

Don't be too concerned with exactitude in spelling in mediaeval English.

Lady Margaret Cromwell was indeed from Notinghamshire, which could be an ld spelling, and she married Sir william Smyth, died in Lincolnshire, and held title of High Sheriff. I can trace back several generations.

Oliver Cromwell was born in Huntingdonshire. Huntingdon is only about 40 miles from Northampton and two different titled families called Cromwell in the same locality is unlikely.

As far as I am aware, Oliver Cromwell's grandfather was named Williams and took his wife's surname Cromwell, upon marriage to preserve the wealthy surname. I consider that Oliver is probably your co-lateral ancestor but not direct.

What a fascinating line you have. Your genealogy would make an interesting page.

No historian has ever doubted Cromwell's sanity, as far as I know.

I have looked up Lady Margaret Cromwell and found that she came from Northamptonshire. This is a county not far distant from the county of Norfolk, where Cromwell lived. Movement from Northampton to Norfolk would only have meant crossing Lincolnshire, which is not hard, so you may be a distant relative of Oliver, though as you say, not by direct descent.

The study of history must include those things that make us uncomfortable. We must understand the whole. In past years members of our faculty visited Austria, and several found themselves visiting the Eagle's Nest, a retreat belonging to Hitler. I could make an argument Crumwell was worse, since it is quite possible Hitler was insane. But could Crumwell also have been?
I have seen the name Cromwell in my ancestry tree, but not Oliver. The latest Cromwell I have as an ancestor is Lady Margaret Cromwell who died in 1467. Alas, I regard Oliver as besmirching the name Cromwell. I have a connection to an even more infamous person, also mentioned here. I descend from a father-in-law, and there were many, of Henry VIII. We cannot choose history, not our connections to it.

You have given me an idea for an article. Thanks.

What is left over from harvest is straw, but rushes are a different kind of plant. Straw is the remnant of wheat; rushes are water plants related to reeds and still grow in the watery channels in the fens known as the Broads. Both rushes and straw were used. There can also be barley straw, but it is not produced in that region. Wheat is from the genus Triticus; rushes are from the genus Juncus.

The rushes left over from the harvest were used in thatch. Nothing was wasted.

That's good information about the word "Fens " - "marsh ". I think it is very localised to Eastern England and therefore little known in our international community here on Wizzley.

When we see images of 16th Century Tudor Christmas feasts, it is easy to assu...

Whilst staying a few days in the English Lake District this week, I started a... 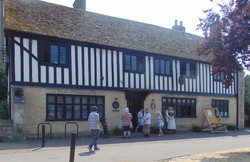 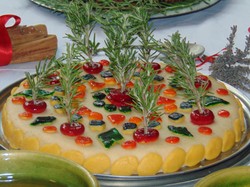 When we see images of 16th Century Tudor Christmas feasts, it is easy to assume that everyone in England was celebrating in this way. Nothing could be further from the truth.
86%  36   6 Veronica
Food & Recipes 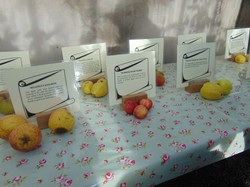 Whilst staying a few days in the English Lake District this week, I started a search for traditional Lakeland food and fayre.
Loading ...
Error!