So, the Olmec had colossal heads? (Who are the Olmec anyway!)

The Olmecs lived along the Gulf of Mexico more than 3000 years ago. One of the things they are most famous for is their colossal heads. No, it's not the Olmec who had enormous heads! They made these huge heads out of rock! It's quite a mystery how they managed to get them to the sites where some remain to this day, and really why they made them at all. In any case, they are amazing, a sight worth seeing, and yet another thing to marvel at in an ancient civilization.

The Olmec have been credited with a number of innovations. Their culture developed a form of writing, the use of zero and a calendar, and the Mesoamerican ballgame that became popular in the region. They also developed a unique style of art. Perhaps their most famous contribution to human society, however, is their colossal heads.

he Olmec colossal heads are enormous heads, wearing helmets, that were sculpted out of rock. At least 17 have been found, each distinct in their features, and their helmets also include unique symbols. The heads are truly huge, ranging from almost 5 feet to 11 feet in height, and many tons in weight. Remember, this is not a whole person, just a head! They were carved from huge basalt boulders, some quarried in the Tuxtlas Mountains; some from the basalt of Cerro Cintepec; others from basalt found on San Martin Volcano. Carving a single head has been estimated as taking 1,500 people three to four months of work.

These heads were found at several locations that are known to have been Olmec settlements. To reach their final locations, it seems that the heads were carried on rafts made of balsa along the Bay of Campeche in the Gulf of Mexico. Not an easy trip, so these Olmecs must have been pretty determined not only to carve these heads but also to bring them to their villages.

Without any surviving stories or documentation regarding these heads, there has been plenty of speculation about their meaning and purpose. Given the uniqueness of their features and helmet symbols, it has been suggested that they represented kings or other significant leaders. The helmets give the impression that they might be warriors, although some have even suggested that they were players in a ballgame!

These sculptures being so notable, many have tried to understand more about the Olmecs through studying the heads. Their facial features, with thick lips and flat faces resemble African faces, which has led some to speculate that the Olmecs were of African origin. An alternative explanation for these features though is that the basalt boulders allowed only a shallow space for carving. Additionally, it has been noted that the eyes are Asian in style, a feature still found in natives of Mesoamerica.

Regardless of whether they are accurate representations of their leaders or more fanciful creations that were not intended to bear likeness to anyone, these Olmec colossal heads are amazing examples of the incredible creativity human beings have evidenced everywhere and in all time periods, even in ancient cultures. The Olmecs used their natural resources to build impressive and long-lasting monuments to those they wish to honor. And, in return, we can certainly feel great respect and appreciation for the Olmecs. Although I might never meet an Olmec, these colossal heads offer a great window into the soul of this culture.

A unique and fascinating piece of art to display in your home or office. The colossal heads of Olmec are one of the great mysteries of art history. Created more than 3,000 years ago, the original is almost 2 meters high, weighs over 15 tons, and is one of four found at La Venta, near the Gulf Coast.

This is a quality museum reproduction of the ancient artwork, handmade by Angel Ceron.

More about the Olmecs and their Colossal Heads

Aren't These Olmec Colossal Heads Something?

Thanks for the comment. Buried bodies? I hope not (especially if it was only a head!)

jptanabe, Thank you for the lovely backstory and product line! Do you think that archaeologists may have overlooked buried bodies (such as with Easter Island's Moai and Turkey's Nemrut Dag heads) to the Olmec heads? I likewise see Olmec-like African features in some ancient Cambodian, Korean and Taiwanese artworks.

Yes, clearly Europeans found northern parts of America before Columbus. The record seems a little murkier for the Southern continent. As you say, we cannot discount the possibility that Africans made it across and could well have influenced the Olmecs.

One persistent and erroneous myth is that until Columbus no one knew of America. But the Basques were fishing the cod banks of Newfoundland for years before Columbus. The Norse knew America, which they called Vinland. While Africans have not been great seafarers, they have been far more competent than white, western propaganda made them out to be, so as West Africa is opposite South and Central America the possibility that some Africans made it to America cannot be discounted. The Moors were able seafarers and used their skills for piracy, but while their behaviour was execrable, their skills at seafaring were great.

If a fossil could be found of one of these people a genetic test should reveal any African cntent.

Fascinating, Frank! I did know there was mixing of Native Americans and black slaves, in Florida for example, but I was not aware of a significant earlier presence of black people in Central America. This certainly suggests that the Olmec at least encountered black people.

I wish I had a sense of how hard it is to sculpt in basalt. Some Web sites say that it's an "extremely hard volcanic rock" but I've found that it contains feldspar, and feldspar has a hardness of 6 on the Mohs scale, so not huge. But then again granite is at 6-7 on the Mohs scale and basalt appears to be a 6-7, too, so then yes, it must have been difficult.

I have just looked up the site colorq, which states that there is archaeological evidence of black presence in the Virgin Islands before Columbus and independent of slavery, and it is not far from there to Central America, where dwelt the Olmecs. . These were free black seafarers and traders. There was also quite frequent mixing between Black people and Native Americans. All of this suggests that the Olmecs may have contained a black genetic element.

The possible African origin of these heads makes me think of stories that one American Indian tribe in the Mississippi region were said to have been black.Sadly I cannot recall which tribe and cannot source the story. So there is the possibility that there were black Amerindians, but these would now be indistinguishable from black Americans and so cannot be traced. If there were black Amerindians the possibility of black Olmecs has to be taken seriously. The Asian eyes could be an indication that some black incomers from Africa intermarried with Native Americans.

Oh my, to watch them being built would be amazing!

If you are looking for a unique gift why not go for a replica of one of the e... 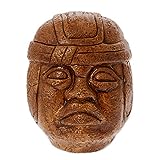 If you're looking for a unique gift, these amazing Colossal heads fit the bill!
29%  3   3 jptanabe
Gift Giving 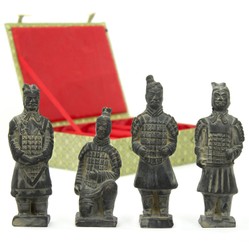 If you are looking for a unique gift why not go for a replica of one of the eight thousand warriors that make up the Chinese Terracotta Army.
Loading ...
Error!