Today's day out took me to the beautiful Cheshire/ Derbyshire border in England's Peak District to an Otter Haven. It was nothing short of enchanting. A hidden gem.

The Chestnut Centre ; Otter Haven and Owl Sanctuary lies in the wooded estate of Ford Hall, Chapel-en-le-Frith. It is a secluded and beautiful refuge for otters, owls and other wildlife.

The Rev. William Bagshawe, who came to be known as the Apostle of the Peak, held services in secret at Ford Hall after he had been expelled from his ministry for not conforming to the Book of Common Prayer in the 17th Century. When the last of the Ford Bagshawes died without an heir, the Hall was bought by Roger Heap who converted the estate into a safe haven for wildlife

The entrance to The Chestnut Centre interested me as soon as I arrived. I decided it must be part of a former Stately Home or Hall, just by looking at the entrance gates. They are curved and very old stone and having seen many others, I decided even before I knew about Ford Hall. This was  no ordinary house gateway. Take a look!

Even better just after the entrance on the right, I spotted a very old Quaker burial ground dating from the 1660's. I was fascinated by this and am determined to know more about the background to it.

A beautiful walk led us down to the Wildlife Haven. The Peaks were stunning today and the air was clean and fresh.

The walk down to The Sanctuary was through a secure gate to protect the animal wildlife. The first thing we encountered were some owls  and otters. The animals are in a protected woodland habitat and are fed a proper diet too at various times in the day.

A Badger Sett was in the Otter area. The burrows were clearly evident.

So many different types of owls there were ;  Varieties of which I had never heard. One variety was particularly fascinating. It would not co-operate for the camera but this type of owl is one which lives underground in burrows. It inhabits abandoned burrows and doesn't dig. The owl itself is very small, the smallest owl I ever saw

It amused us to see a Giant Skunk cabbage growing by the brook. It is sometimes called a Skunk Lantern because of the yellow lantern shape on it. It supposedly gives off a bad smell if touched. The yellow "lantern" can be seen at the back.

Pet Cemetry in the woods

There is a rather endearing pet cemetery where the family at Ford Hall used to bury their pets and leave a grave stone as a marker.

It is a North of England Spring of course,  so what else but everywhere is covered in beautiful wild bluebells.

All in all this was a lovely half day out. The place is isolated, peaceful, enchanting and educational.

I am so blessed to have such beauty within easy drive from my house, this being 30 minutes by car.

I loved it there today.

All the animals have been rehomed , mainly to the south of England. It was a sad day when it closed down.

Veronica, Thank you for the lovely tour of the animals and grounds. Where are the rehomed otters now? Is it down to beavers and owls or is there a successor to the otters?

Sadly the Otter Sanctuary was obliged to close earlier this year.

The animals have been rehomed.

Indeed and I think the fact that this one is mainly specific to unusual creatures like otter and owls makes it rather more interesting. The toadstools were decorative and I would think best used by children. I'd probably have difficulties getting up again !

As you know, I love a day out and this was one with a difference.

Having wildlife sanctuaries is important.
I like the toadstools, but are they comfortable? Regardlrss, they are decorative.

It is a lovely half day visit I would think. The scenery is stunning and the air crisp . The animals are beautifully cared for in a very natural environment which is what I like to see. 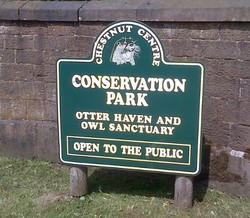 Edale is a beautiful village in Derbyshire, ( pronounced Darbishur ) England. I visited it today with a special friend, someone I can be myself with and tell anything to.
63%  12   4 Veronica
Travel & Places

Cheshire's world famous radio telescope Jodrell Bank was the location of my Cheshire Day out today. Here's an account of it as a location and a little about its past.
Loading ...
Error!