Sold to a brothel in Shanghai at age fourteen, Pan Yuliang nevertheless managed through fate, fortitude and sheer courage, to reach Paris and become an artist.

The life of Pan Yuliang (1895-1977) is one which managed to bridge the artistic divide between East and West.

Although little is known about the details of her life, what is documented leaves little doubt that she was an exceptional woman.

To be a woman in China at the turn of the century was difficult, to be a female artist was almost unheard of, whilst to move to Europe to study art was extraordinary.

Pan Yuliang was born in 1895 in the Chinese province of Anhui. Her original family name was Zhang.

Both her parents died when she was young and her uncle sold her to a brothel in Wuhu when she was only fourteen years old.

This early, traumatic experience may have influenced her attitude to the female nude in her later career. Her paintings show representations of strong, autonomous women who seem content in their own skins.

Whilst working in the brothel, Yuliang met Pan Zanhua, a forward-thinking customs official. This was one of those fateful meetings that occasionally happen in life.  Pan Zanhua was to be Pan Yuliang's escape to a life that would otherwise have been quite unthinkable.

But the kindly young customs official felt a sympathy for her plight and paid to release her.  She became his second wife. In gratitude, she changed her family name to Pan.

A Chinese Film Which Interprets the Life of Pan Yuliang

This can also be seen on You Tube in segments

Yuliang and Zanhua moved to Shanghai, which was just becoming known as ‘the Paris of the East’. Their next door neighbour was Hong Ye, a teacher at Shanghai Art Institute, one of the most avant-garde art schools in China.

Hong Ye taught Yuliang drawing and painting, encouraging her to apply for a place at the Institute. She passed the exams in 1918, entering the Shanghai Art School as the first female student. Here she began to study Western art.

The Chinese authorities did not take kindly to the approach taken by the Shanghai Art School. Its Headmaster, Liu Haisu, was constantly being threatened as he refused to comply with traditional Chinese values.

It was impossible for a woman to be recognised as an artist. As for actually depicting the nude female body, this was absolutely forbidden. To skirt around these limitations, Pan Yuliang frequented the bath houses where she sketched the naked women.

It would be many years before her artistic achievements would be acknowledged by the Chinese government. For most of her career she was seen as depraved and corrupt.

Her work is not in the public domain - there appears to be a work by Gauguin in the mix, or is it Pan Yuliang's interpretation?

In 1921, Pan Yuliang’s life changed once more. With the sponsorship of Pan Zanhua, Yuliang emigrated to Europe to further her painting studies, She studied in Lyons and Paris, and was then awarded a scholarship to study in Italy at the Roman Royal Art Academy.

In 1926 she won the Gold Prize at the Roman International Art Exhibition.

That same year she chose to return to China at the invitation of Shanghai Art School, where she became a teacher.

No doubt she longed for her homeland.  But life was never going to be easy for this extraordinary Chinese female artist.  The China Daily for September 5th, 2007 claims that during her fifth solo exhibition in China, a member of the public tore up one of her works of art stating, “This is a prostitute’s carol to a whoremonger”.

A Section of the Film 'A Soul Haunted By Painting'.

A Section of the Film 'A Soul Haunted by Painting'

After a few years and no doubt longing for the greater artistic freedom of France, and influenced by the start of war between Japan and China, Yuliang left Shanghai in 1937 and settled permanently in Paris.

Eventually she would become Chairman of the Chinese Art Association, exhibiting her work all over Europe. French establishments collected her works, including the French Ministry of Education and the National Modern Art Gallery.

In 1959 she was awarded the Paris Gold Prize and the Belgium Silver Prize.

Protective of her independent life and artistic freedom over all else, even to the detriment of her financial status, Yuliang became known as The Woman of Three ‘No’s’ – no art dealers, no French citizenship, no lovers.

Pan Yuliang's life was lived against a back-drop of turbulent social change both in Europe and China. In the 1940s she experienced the Nazi occupation of Paris.

She became increasingly homesick, but in the 1960s the Cultural Revolution and illness prevented her return to China. A further stumbling block was the French government’s refusal to allow her to take her paintings home.

She died in 1977 in her attic room in suburban Paris and is buried in that city.

A sensitive speculation on what is known about her life - recommended

Pan Yuliang was a unique female artist who combined traditional Chinese art with European modernism. Her fusion of Chinese ink painting line into Western-style compositions was truly innovative. The influence of Matisse is apparent in her brightly coloured paintings, together with a traditional Chinese elegance and restraint in her many strong nudes.

A novel by the author, Jennifer Cody Epstein, The Painter From Shanghai, is based on the life of Pan Yuliang. It offers a speculative insight into what may have been Yuliang’s interior life and the events that shaped her unique artistic development.

Where to see Pan Yuliang's Work

Pan Yuliang stipulated in her will that the majority of her works should be returned to China on her death. These works are now in collections at China National Art Gallery in Beijing and Anhui Provincial Museum in Hefei.

The life of Pan Yuliang is an inspiration - it is the life of a woman in whom the creative desire to express her artistic self  was so great that she was prepared to suffer loneliness and isolation, prejudice and chauvinism in order to never compromise her artistic integrity.

Hello Sara, I am so sorry you are disappointed with my article. Thank you for your comments, and I do hope you will let me know when the study is published so that I can improve on my article. I appreciate your response.

I am sorry to see yet another iteration of the fictional tale of Pan Yuliang. Most details and dates in this blog are inaccurate, not because of any intention on the writer's part to deceive but because this story simply replicates the hundreds of thousands of online tales about Pan Yuliang that have appeared since the advent of the Internet. All based on a 1983 novel by a Chinese writer who made the story up. Yuliang was indeed an amazing woman to achieve what she did, but her true story is far more fascinating than the degrading fiction that continues to be spread about her. Look for a serious researched study to be published about her soon.

EmmaSRose - Thank you for your lovely comments. I agree with everything you say about Pan Yuliang. I feel such love and admiration for her - she suffered on every count but despite her loneliness she was true to herself. Your friend is so right - perhaps some of the greatest artists live in the 'real' essence of the world whilst we are all stumbling about trying to cope instead of being like Pan Yuliang and following our deepest desires. 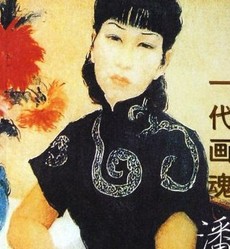 Suzanne Valadon was a Fench circus performer, artist's model, waitress and single mother who overcame her class background and her gender to become a respected artist.
62%  8   5 KathleenDuffy
Famous Painters