Whether they are heading for Brazil or watching the tournament on television, football fans from around the world will be adding to their enjoyment of the 2014 Fifa World Cup with the official Panini sticker album. Here, Steve Rogerson peruses the 80 pages to tell you what to look out for. Happy collecting!

The excitement is building for the Fifa World Cup 2014 in Brazil and already fans around the world have started collecting stickers for the official Panini World Cup 2014 sticker album. This has become a must for the many thousands of fans who cannot get to Brazil to watch the tournament live. Collecting the stickers is fun plus the completed album becomes a nice companion to watching the tournament on television.

The full World Cup 2014 draw is included on page one of the album (the outside and inside cover are not numbered); this gives all the matches and venues from the knock-out stage right through to the final on 13 July 2014 in Rio de Janeiro. Venues for the group matches can be found on each country’s own pages. The inside front cover and page one also have room for eight stickers with sticker 00 being the Panini Special Sticker, sticker one the Fifa Fair Play sticker, stickers two and three the logo, stickers four and five the mascot, sticker six the trophy and sticker seven the ball.

The 80-page (plus four pages making up the inside and outside of the cover) album has room for 640 stickers, the same as in the 72-page World Cup 2010 album.

Pages two and three contain stickers eight to 31 which illustrate the venues and the stadium. Each venue has two stickers combining to show the stadium.

The album then goes in the teams in more detail. Each team has two pages containing 19 stickers. One of these is a team photo and another is the badge, which is a glittered sticker. The other 17 are pictures are of players. The two pages also show how each team qualified and gives the dates and venues of their group matches.

The teams take the book up to page 73 and sticker 639. There are, however, two breaks in the team pages – pages 22 and 23 show the cities in which the World Cup will take place and pages 40 and 41 (the centre spread) has a display of the host city posters.

Pages 74 and 75 is a spread of pictures showing the World Cup qualifiers. Pages 76 and 77 form an advert for other Panini World Cup products including T-shirts and trading cards. Another Panini advert is on page 79 with page 78 a Fifa advert. Page 80 provides some World Cup facts – did you know the biggest victory was 10-1 in the Hungary versus El Salvador match in 1982?

Cost of Collecting the Panini Stickers

A starter pack containing the album and 31 stickers is available for £2.99 in the UK. However, many shops and newsagents will be giving the album plus six stickers away for free in the hope that this will encourage people to start collecting.

Each packet contains five stickers and costs 50p. A number of online retails are selling a box containing 100 packs for about £50, and some are offering deals on bundles of packs.

The inside of the back cover of the album explains how to order missing stickers over the internet or via post. The Panini web site also has a swap area for some but not all countries. And there is a section that lets you create your own World Cup 2014 sticker with a picture of your choice.

Your subheading Stickers in the Fifa Woirld Cup 2014 Album indicates that the biggest World Cup win came in the 10-1 score of Hungary versus El Salvador at the 1982 World Cup.

Would you happen to know if that biggest-win record has been beaten?

Who are favourites to qualify from the groups in the 2014 Fifa...

A look at the betting odds for teams to qualify from the group stages in the ... 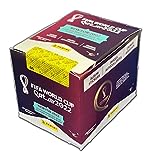 Who are favourites to qualify from the groups in the 2014 Fifa World Cup?

A look at the betting odds for teams to qualify from the group stages in the 2014 Fifa World Cup.
Loading ...
Error!