Parental Alienation Syndrome is what can happen when two parents divorce or split up and one of them turns the children against the other.

What happens when two people with children split up? It’s bad enough for the children to witness all the fighting that sometimes goes on before the split, let alone what can happen afterwards. Sometimes, one of the parents turns the children against the other, and prevents the children from seeing the other parent. Sorry to say it but there are no easy answers here, and the reality is that you may never regain the situation. But maybe you can try...

When a relationship between two people ends, it often gets messy and acrimonious.  There can be a whole host of reasons for this, sometimes it’s because one of the parties has been unfaithful, but might be for some other reason.  It doesn’t really matter what the reason is, as the saying goes, “there is no such thing as a happy divorce.”

However difficult it is for the couple though, it can be even harder for the children.  In many cases, they don’t understand why Mummy and Daddy aren’t living together anymore, especially if they are very young.  And whichever parent moves out of the marital home, it can be extremely hard if you have to stop having regular access to your children.

There can be a number of reasons for this, including:

Whatever the reasons, if one parent is telling the children bad things about the other, it can be hurtful and confusing for the child.  Children don’t like to think of their parents being hurt.

As a consequence, the absent parent becomes alienated from the children.  It’s not just the parents who are affected, aunts, uncles, cousins, grandparents can all be affected.  This situation was described as Parental alienation Syndrome by an American psychiatrist, Richard A Gardner, back in the 1976, although originally he described it as pathological alignment.  I don’t think it matters whether it is considered a psychological condition or just as an effect of divorce.  It’s the effect that matters.

It seems that some mothers lie and say that the children are the ones who don’t want to see their father.  In the United States, this may tested using the Frye Test or the Frye Standard, although other tests to confirm whether the parent is telling the truth may be used.   As far as I can ascertain, we don’t do this in the UK and PAS isn’t recognised by the UK legal system.

Some absent parents give up the fight.  They stop seeing the children.  I can tell you from the experiences of those close to me that this is not usually an easy step.  Many parents don’t know what PAS until it happens to them.  As with so many things in life, there are small, seemingly insignificant changes that start to build up, the mother stops telling the father things that are relevant to the children, the children start to make excuses for not seeing the father, they break contact with other members of the family, they go to the school, etc, and tell those organisations that the father is not to contact the children there.

If you find yourself in this situation, be as honest with the children as you can, but don’t retaliate by badmouthing the parent with whom the children live.  What I mean by being honest is not providing all the goring details of what happened, but explain that what has happened is between Mummy and Daddy and not a reflection of the children.  And please don’t get fooled into being the parent who is the one who doles out all the punishment – without any conscious effort from your ex, the child will come to associate you with being the one who is always telling them off.  Take advice from a good lawyer experienced in dealing with this.  The advice from organisations that help the absent parents with this (Families Need Fathers is a big one) is to keep a record of these incidents, and if you find yourself in this situation, it would be a good idea to contact one of these organisations. The truth is, sometimes the absent parent does lose contact with their child/children for good.  I wish I could say that wasn’t the case, but it is.

I am afraid when parents fight , the worst sufferers are children. There is no better gift for a kid that comes close to what a healthy, loving family can do. Children learn their first lessons of behaviour from their parents. If they see a troubled relationship, it is likely that the hurt remains forever. I agree with you that there is no simple solution to this problem. With the increasing stress in our life styles there are more instances of divorces today. I think spirituality and meditation can help but it has to be accepted and practiced.

I hate to see children go through so much when their parents divorce...and it is far to common today.

Yes and so it goes on.

I agree. Having taught in schools for many years, I have met so many broken familiess.

You and I were amongst the fortunate ones Frank. The alternatives don't bear thinking about.

I think that children emotionally live in and on the quality of their parents' relationship. If that relationship goes wrong, the children always suffer. I am thankful that my parents had a good relationship, and when my mother was physically and mentally ill during my childhood, my father was loyal and stayed with her through the dark period. What I would have done if he had cracked under the strain and left I know not, but my life would not have been as good as it now is. But my parents were devoutly attached to the full Catholic standards of marriage. It was their strong faith that drove them through a difficult time.

Sadly, I fear your grandmother was right.

This is so sad when it happens. My grandmother used to say that during a divorce the children really suffer.

If you know a father-to-be, then you know someone who needs a little guidance...

Fathers are a vital part of baby's world, and just as excited and nervous abo... Light on the Other Side of Divorce: Discovering the New You (L...
23%  1   3 lakeerieartists
New Dads 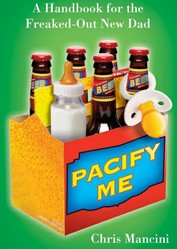 If you know a father-to-be, then you know someone who needs a little guidance. Here is a list of the best books for new dads that are written for men.
17%  1   2 lakeerieartists
New Dads Fathers are a vital part of baby's world, and just as excited and nervous about the new baby.
100%  12   8 dustytoes
Road Trips with Kids