Paul Gauguin - 'The Vision After the Sermon: Jacob Wrestling with an Angel'

'The Vision After the Sermon:Jacob Wrestling with the Angel' was Gauguin's first masterpiece. This Symbolist work broke free of the realist tradition in art.

Paul Gauguin’s painting, 'The Vision After the Sermon: Jacob Wrestling With the Angel' is a many-layered work produced during his stay in Brittany.

It reflects a story from the book of Genesis where Jacob wrestles throughout the night with an angel. The theme is mysterious and dramatic, and is often said to represent a spiritual struggle, a dark night of the soul – a conflict recognised by those of both a religious and secular disposition.

In 1886 Gauguin spent his first summer in Pont-Aven, an international artists’ colony in Brittany. Like others, he was drawn to this picturesque port because not only was it a cheap place to live, but the landscape was picturesque and the models were plentiful. At this point in his artistic life Gauguin was trying to solve the problems faced by most painters at that period who no longer found Impressionism an adequate form of expression.

Industrialisation was already creeping into the life of Pont-Aven in the form of new methods of agriculture. Such an intrusion undermined the popular artistic perception of peasant life as noble and traditional.

However, Gauguin ignored such modern innovations. This was not because he glorified the traditional life of the peasantry, but because he wanted to strip it down until it became a decorative motif that reflected his imaginative ideas.

At the same time Gauguin was attracted to what he perceived as a basic ‘primitiveness’ inherent in the Breton peasantry, an emotional earthiness or truth which he often felt he possessed himself through his native Peruvian ancestry.

Books About Paul Gauguin and his Influence on Modert Art Movements

Paul Gauguin and the Symbolist Movement

Many writers and artists were turning away from the Positivist belief that the only sound basis of knowledge was the study of material reality.

The Symbolist movement in literature and philosophy questioned such claims. Rather than purely recording observations of the world, Symbolists believed art should convey a world of emotions and ideas beyond everyday reality. In painting, this meant using only the basic lines, forms and colours that enabled the artist to reveal the inner meaning of the work.

Shades of Sleep by Odil Redon

The Dream by Puvis de Chavannes

Trade with the East had brought with it a European mania for anything Japanese. For artists, the Japanese print was greatly admired because of the simplicity of the work and the tendency to avoid three-dimensional illusion. Gauguin would certainly have been familiar with these imported artworks.

Another Pont-Aven artist, Emile Bernard, also influenced by the art of Japan, created a painting, Breton Women at a Pardon. (A Pardon was an annual Breton religious ceremony.)  This painting is also known as Breton Women in a Meadow.

Gauguin greatly admired this work with its absence of both a light source and a vanishing point, as well as a disregard for visual depth. Bernard’s unconventional approach seemed to correspond with Gauguin’s search for a decorative, abstract style to match his imaginative ideas

Vision After the Sermon is influenced by Bernard’s work. The women’s head-dresses are simple and decorative, some of the figures are cut off by the picture frame and the subject is also that of Breton women at a religious ceremony.

Unlike Bernard’s work, which depicts a friendly, communal gathering, Vision After the Sermon is a profoundly strange, spiritual painting. The flat red ground and white bonnets and the tree which cuts across the picture show the influence of Japanese prints.

However, the tree in Gauguin's painting also serves to divide the material world from the spiritual, imposing an emotional depth to the work that is absent in Bernard’s.

Compare the Japanese print on the right with Gauguin's painting and you will notice the similarities.

After Clarence, the angel, rescues George Bailey from the river after his suicide attempt, the whole scene inside the hut is symbolically divided with a clothes-line to separate the sacred world of Clarence from the secular world of Bailey.

Paul Gauguin in His Own Words

The Importance of Paul Gauguin’s Vision After the Sermon

By representing a mystical experience Gauguin broke with realist conventions. The symbolism of the work was criticised by his fellow artists, Pissarro and van Gogh, and made viewers feel uncomfortable.

However, the achievement of Vision After the Sermon was that it represented Gauguin’s long-held belief that art was truly autonomous and could represent complex feelings and emotional meaning.

This dramatic work is important not only because it is regarded as Gauguin’s first masterpiece, but it represented the way in which painting would evolve in the wake of Impressionism.

The Vision After the Sermon can be viewed at National Galleries of Scotland, Edinburgh.

I'm glad you like Gauguin. He is probably my favourite painter and I love this work in particular. Thanks so much for your comment.

Beautiful! Love Gauguin's use of color. Didn't know about the Japanese influence on his work. You've made me want to look at this painting in more detail.

Just stopping by to give you my congrats on another well written and visually stunning art article, Kathleen! :) 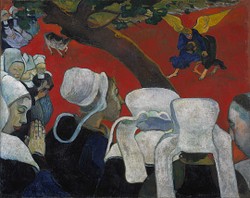 This work by Edgar Degas illustrates an aspect of the emerging dynamics of 'modern life'.
81%  8   8 KathleenDuffy
Famous Painters

Monet's paintings of the River Thames tried to capture the fleeting effects of fog and mist on London's commercial and industrial watery highway.
Loading ...
Error!