The Pied Piper of Hamelin - The Background of the Story

The legend of the Pied Piper of Hamelin is based on true events, but nobody knows what really happened so many centuries ago.

The Pied Piper of Hamelin is not a classic fairy tale. The ominous feel of the story is not the only reason for that. Thanks to several documented events with many elements similar to the ones in the story, it is very likely at least partially based on true events. While nobody knows what really happened in the German town of Hamelin in 1284, we can provide several interesting facts which might help to explain the background of this legend.

Here are top ten facts about the Pied Piper of Hamelin.

1. Very likely based on true events

There is pretty good evidence about loss of 130 kids in the town of Hamelin on June 26, 1284. Several documents mention the church window made of stained glass portraying the scene with a colorfully dressed stranger playing flute who led children into an unknown direction. They have never been seen again. We must add a rat-catcher was not mentioned and there was nothing about the deal with the city council or major. These parts were added to the story later and it is believed The Pied Piper as is known today is a fusion of at least two stories.

If you need to refresh the basics about the story about the piper of Hamelin, don't hesitate visiting:

Many interpretations of what really happened are available, so we'll explore five of the most popular ones.

2. One possible (and very popular) explanation is the plague. Colorful (pied) dress of the piper is sometimes explained as a symbolic presentation of lesions, as a consequence of overcome disease and clear proof of his immunity. Rats are clearly connected to the bubonic plague, but three elements don't support this theory:

3. Another intriguing explanation was a so-called Children's Crusade. Thousands of unarmed children marched from France and today's Germany towards Jerusalem. This controversial movement is pretty unclear to historians, but it seems:

We should note that several versions of the legend mention that not all the children were gone. Some (on, two, or three, depending on the variation) stayed in Hamelin because they were handicapped (blindness, deafness, lameness, ...), what supports the theory of recruiting kind of army.

While all presented facts don't deny connection with a Children's Crusade, this happened more than half of century before the pied piper took the kids from Hamelin.

4. Yet another possible, although not very believable possibility was connected with then relatively common situation - poor parents were selling their children to rich buyers. Most of them were turned into slaves, but such solution sometimes seemed as better of two bad ones: live as a slave or die from starvation.

It would be very strange to execute such massive deal with 130 kids at once and almost unbelievable to document it in the church window, which, by the way, was made only a century or more after the piper came into Hamelin.

5. Finally, we must mention one less known, but in the 13th century relatively frequent occurrence called dancing mania. Groups of people for started dancing apparently no reason and couldn't stop for hours or days until they became too exhausted and collapsed.

To control the dancers at least a bit musicians were sometimes sent to the dancers, but their music could attract even more dancers to join. One such mania could end with a massive tragedy, like a broken bridge under hundreds of the dancing feet.

At least two incidents with massive dancing in the 13th century are well documented and could serve as seeds for the legend of the Pied Piper of Hamelin.

Scientists can only guess what caused the outbreaks of choreomania with major peaks in times and locations (roughly) of several variations of the stories similar of the one from Hamelin.

6. This part of today's northern Germany was extremely poor in the 13th century. Diseases and famine were everyday issues, so selling people, especially children was an obvious and simple solution.

Young families and youngsters were among the most vulnerable groups, so we can believe at certain moment majority of younger folks was absent from the city. A popular way to go was East with a large unoccupied land.

This theory is somehow supported by a research of surnames in Hamelin with surroundings and parts in Poland. Surname Hamel (meaning from Hamel) is surprisingly often found in polish phonebooks. There is also a version where kids are not led into the water or in the cave in mountains, but into the mountains in Transilvania (today's Romania), what also speaks in favor of this explanation.

7. The memory is still alive today.

8. An endless source of inspiration.

The Amazing Maurice and His Educated Rodents

Terry Pratchett's take on The Piper of Hamelin

In others, Hamelin represents totally corrupted place, from which kids need to be saved - possibilities are virtually endless, what makes this story especially valuable for artists from all creative areas.

9. Hamelin is the most famous, yet not the only example of such event

Brandenburg, Erfurt, Korneuburg and Neustadt-Eberswalde all share a similar story about a stranger who cleared the town of rats and/or lured children with music to leave the town and never been seen again.

Similar stories are also known in Denmark, England, and even in Syria!

10. The phrase 'Time to pay the Piper' could be derived from this story

It is often used to warn people not to break their promises. If you don't pay your debts, you'll have to bear consequences. If we think a bit, losing children is even worse than losing your own life, because children represent the future - with them, your family name, all the lineage, disappears. In a few versions, children are actually portrayed as saved by the piper, having a better life without dishonest parents as role models.

But! The full phrase is actually "He who pays the piper calls the tune!" what sends a completely different message - the man who is paying for something, makes final decisions - nothing about the consequences. The oldest known date of this saying (1611) predates Browning's ballad for several centuries. There is also a similar phrase known in Germany, predating Goethe and Grimms for many decades as well.

What do you think about The Pied Piper of Hamelin?

Yes, sandyspider, this story makes Hamelin a really interesting tourist spot and city is using it to its full advantage. I believe most of the cities hide similar, althoughj not always so horrifying stories behind their walls. Thanks for stopping by!

I would like to visit Hamelin and see the rat paintings in the pavement. Interesting to this could be part of real events.

Thank you, Veronica, for your comment. I agree with you - there must be true event (or events) behind this story, which after some time and retellings started to live the life of its own.

Thanks, sheilamarie, for stopping by. I think all stories are based on true events. It's only the perspective and imaginary power of the teller which makes a difference between the truth and the fiction.

Excellent. I have been fascinated by this legend for many years. It has always held my attention. I always consider a legend differs from a myth in that a legend may possibly be true.

I always think there is a grain of truth in every tale such as this and your analysis is very thorough.

The idea that it was able bodied youngsters attracted by a musician holds sway with me as a form of recruitment.

Thank you for posting this; I am fascinated all over again.

I didn't realize this story was based on real events. What a tragedy!

The pleasure was all mine, Thamisgith:)

Thanks for an interesting and enjoyable read Tolovaj. 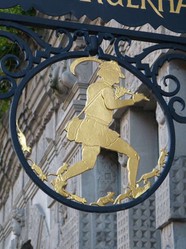 The princess made a promise to a frog and doesn't want to keep it. To her surprise, her father takes frog's side!
100%  14   9 Tolovaj
Classics