Got Attitude? Well show it when you put one of these pirate biker patches on your leather motorcycle jacket or vest. High quality and low price.

Bikers have swagger. That's one of the reasons that moto fashion is just so plain hot these days. People who have never sat on a bike, are wearing leather jackets. Even women are pairing leather and denim style motorcycle jackets over toile and lace skirts. Let's face it there's a little bit of bad boy or bad girl in all of us. We'll if you're the real deal and ride a bike, add one of these pirate biker patches to your hat, jacket or vest. Skulls, pirate hats, smokin' pistols - and just a bit of trash talk.

This patch says, Don't mess with me, ever! Sometimes you just have to put people on notice and this pirate biker patch will do just that.

When I first saw this large biker patch, I thought of a pirate guarding his treasure. The distressed background is really a treasure map. If you look closely you'll see a compass over the tip of his gun. The map paper is scrolled up and on each scroll is part of the phrase, Dead Men Tell No Tales.

The crossbones beneath the pirate skull is made up of his pistol and knife. I love the detail in this unique pirate biker patch. Even a few of his teeth are yellow instead of white. He has on a gold earring. His pirate eyepatch has a skull and crossbones on it. His pirate bandana has a traditional print as well. It has a distressed yellow parchment look and with light purple highlights. It is surrounded in black. You'll be proud to feature this large motorcycle patch that measures 11 inches by 12 inches.

Check out this awesome pirate biker patch. I love his bright red pirate bandana that has a skull pattern on it. That's an example of the detail of the embroidered biker patch. Yes. the patch would have been great with just a plain red bandana, but the artist took it to another level. It also flows down the right side of the skull, behind the six-shooters to add visual interest.

The pirate also has a gray eyepatch and ragged smile with missing teeth. The six shooters frame his pirate skull in the same way as a skull and crossbones.

This pirate skull is a little more formal than the one above. He's got on his formal pirate hat. It's black and has a skull and crossbones on it. He has one a black eyepatch and a gold hoop earring in each ear. He is smiling, but with almost all skulls, he's missing a few teeth. The skull is framed with smoking guns. You can see it wafting up over his head.

It is also available in two sizes. The large measures 12 inches wide and 11 inches high. Click Here for Large Size

You can Never Have Too Much Swagger

Edgy and artistic skull motorcycle patches for guys. Skulls are wrapped in wi...

Lone Wolf, No Club Biker Patches for the Independent Biker

Great collection of motorcycle biker patches for the motorcycle rider that do... 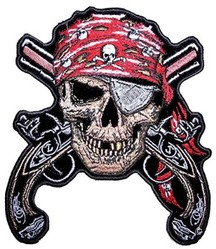 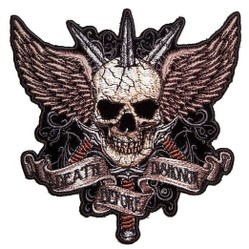 Edgy and artistic skull motorcycle patches for guys. Skulls are wrapped in wings, flames and dressed like pirates. Full of attitude and affordably priced.
16%  0   2 Digby_Adams
Motorcyles 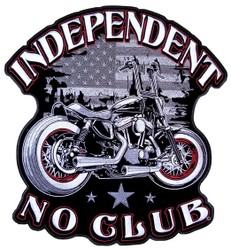 Lone Wolf, No Club Biker Patches for the Independent Biker

Great collection of motorcycle biker patches for the motorcycle rider that doesn't belong to a group. High-quality and affordable.
Loading ...
Error!