The Pitlochry hydroelectric dam, and its famous fish ladder, spans the River Tummel in Scotland. Constructed between 1947 and 1951, the fish ladder allows salmon upstream to spawn.

The Pitlochry hydroelectric dam, and its famous fish ladder, spans the River Tummel in Scotland. Constructed between 1947 and 1951, the dam was built across a salmon run. To prevent the dam obstructing the salmon when they swam upstream, the dam is accompanied by a fish ladder that allows the salmon to leap up a series of pools and then past the dam.

The Pitlochry Dam was constructed between 1947 and 1951 as part of Scotland's hydroelectric scheme.

By damming the River Tummel to create Loch Faskally, it created an artificial lake which generates electricity with turbines in the powerstation at the base of the dam. Part of the Tummel power scheme, the Pitlochry Dam is the last dam in the scheme. The dam is 86metres high, and is designed to generate 15MW, while the entire scheme of five linked hydro-electric plants can generate up to 245MW. Opened in 1951, it has been working successully for over sixty years.

Recently the dam and fishladder were granted protected status - despite still being a fully operational power generating station.

However, the River Tummel was a well known salmon run. Because of an Act of Parliament fish stocks had to be protected. There was no way the salmon could jump the dam, so to avoid problems with the salmon spawning upstream, the dam was designed with a "fish ladder" beside it. This has proved a major tourist attraction, and makes Pitlochry the best known part of the scheme.

Water from the dam is diverted down a series of pools beside the dam, slowing the flow. This allows the salmon to travel down to the sea from upstream once they have spawned. When they are ready to return, they travel upwards by leaping from pool to pool against the flow of the river. There are 34 pools in the ladder. This includes three "resting pools" which are deeper and larger so the salmon can regain strength before the next series of jumps. Viewing windows under the surface allow visitors to see the fish using the ladder.

Not surprisingly salmon fishing is a popular past-time in the area, and the largest salmon caught have been displayed in the dam.

Where the River Tummel was dammed, it created Loch Faskally. Meant as the feeder loch and reservoir for the dam, it has also become a wildlife habitat and fishing ground.

Two miles (5km) long and varying between 50 and 800 metres wide, it has woods on either side although steep slopes on either side make approaching it difficult. On the bottom of the loch are old buildings, flooded when the river was dammed. Fishing is allowed, usually from boats which are available for hire, and trout and pike are regularly caught as well as salmon. A range of wildlife also lives around the loch, and those who are lucky may glimpse an osprey as well as herons and kingfishers in the area.

Other things to visit in Pitlochry

There are plenty of other reasons to visit Pitlochry.

The scenery is outstanding, including the nearby Black Spout woods with their waterfalls.

A visit to Pitlochry dam

As I can't find an official site about the dam and fish ladder (the Scottish Electric site most refered to has closed) I am adding the best links on the topic here.

Leave your comments below:

Fond memories of Pitlochrie, and it's fish ladder, a beautiful place! 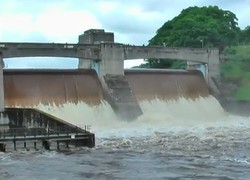