To mark 150 years of London's underground transport system the London Transport Museum presents Poster Art 150 - an exhibition of 150 of the finest posters in their collection.

London's Underground system is the oldest in the world. Since its inauguration in 1863 it has been one of the world's most important patrons of the arts. Copies of every commissioned poster have been retained resulting in one of the world's finest collections of poster art which is now in the care of the London Transport Museum. This remarkable store includes more than 5000 graphic posters and at least 1000 original art works.
The posters appearing in this exhibition were selected by a panel of experts. Throughout the show visitors will be invited to vote for a favourite poster either in the gallery or online in The Siemens Poster vote. The results will be published at the end of the exhibition and it will be interesting to see which poster wins.

Poster Art 150 - Layout of the Exhibition

The Art of the Poster

In an exhibition of this quality it's almost impossible to select 'highlights'. It's a matter of personal taste and for me four posters in particular stood out:

London Transport - Keeps London Going (1938) by American-born Man Ray (1890-1976) demonstrates how London's underground network kept the city rolling along in the inter-war years. The poster is designed in two halves, known as a pair poster. In the 1940s, the head of London Transport's publicity department, Harold F Hutchison, standardized the design of these posters. One half contains an image and the other contains text that explains the purpose of the poster. These posters were usually placed in prominent positions such as entrances to Underground stations.

Man Ray (also known as Emmanuel Rudnitzky) was particularly interested in Surrealism, and will be remembered for his experimental work with photographs, or 'rayographs'.

The Hungarian sculptor, painter, designer and photographer, Laszlo Moholy-Nagy (1895-1946), was another important artist commissioned by the Underground's publicity department. His poster, Your fare, (1936) is one of a short series of posters advising passengers on fares from one station to another.

After initially training in law Moholy-Nagy moved to Berlin in 1920 where his talents were recognised by Walter Gropius who asked him to run the metalwork shop at the Bauhaus. He taught there from 1922-1928. He was a member of the Abstraction-Creation group in London, Paris and Chicago where he directed New Bauhaus from 1938-1946.

Play between 6 and 12 - Edward McKnight Kauffer

Poster Art 150 also features posters by Edward McKnight Kauffer (1890-1954). After moving to London at the outbreak of World War I, Kauffer began a long association with the Underground Group and London Transport (1915-1939) during which he produced various posters including Play between 6 and 12.

Educated in the USA and Paris, Kauffer was a prolific designer whose work was influenced by Futurism, Cubism and Surrealism. Kauffer also produced posters for the Great Western Railway, the Post Office, the Empire Marketing Board and Shell.

London is well-known the world over for its public ceremonial occasions and in 1932 Margaret Calkin James (1895-1985) was commissioned to produce Trooping the Colour. London-born Margaret Calkin James, well-respected water colourist, textile printer, calligrapher and graphic designer created posters for the Underground Group and London Transport between 1928-1935. James opened The Rainbow Workshops in 1920, one of the first galleries established by a woman specifically to nurture art, craft and design.

When to Visit and What to Do

Poster Art 150 - London Underground's Greatest Designs will be on show until 5th January 2014. Apart from exploring the exhibition visitors can take part in a comprehensive programme of events for adults and children including story time sessions, talks and tours, Friday Lates, workshops and panel discussions. There are also regular Open Days at the Museum Depot at Acton, West London. Tickets and further information can be found at London Transport Museum.

Thank you for reading - glad you enjoyed it

Norah's Cafe in Taubman Museum of Art: A Great Cup of Coffee O... 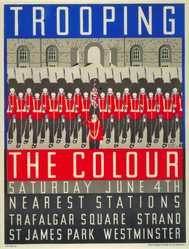 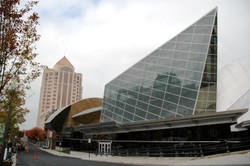 Norah's Cafe in Taubman Museum of Art: A Great Cup of Coffee Over Art in Downtown Roanoke, Virginia 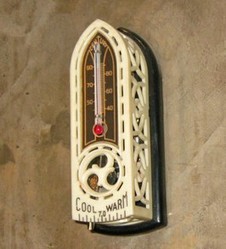 The Shemer Art Center and Museum in Phoenix, Arizona holds special art exhibits like the Water in the Desert Exhibit and offers art classes to members and the general public.
Loading ...
Error!