Some weeks ago, on the way home we saw people flying though the air in a park! OK, flying might be a bit of an exaggeration, but we did see ...

Two weeks ago, hubby and I walked home and as we passed by a park called Letna, we saw people flying though the air! OK, flying might be a bit of an exaggeration, but we did see people jumping high, turning over in the air, landing and jumping again. I was immediately reminded of the old German fairy tale of the magic 'Sieben Meilenstiefel', something what could be loosely translated to 'Seven Miles Boots'. These are described by the famous brother Grimm of German fairy tale fame as follows:

'A pair of boots with magical abilities that allow the wearer of said boots to jump fast over great distances, covering seven miles in an instant.'

They are a ever reoccurring motive in German fairy tales and literature. The more historical, and a bit more boring, explanation of this idea lies in the heavy riding boots the postilions / postillions and coachmen wore during their duties. These boots would only touch the ground every seven miles or so, when the horses were changed or any other travel break was necessary.

This is similar to what we saw ;-)

But after this short excursion into the post-medieval European travel habits, back to the latest urban funsport craze here in the Czech Republic and elsewhere in the world. This newest outdoor activity is especially favorite with young people that have tried everything else and are looking for the ultimate kick. And with people that find going to the Gym just plain boring ;-) So, what are these mythical 7 miles boots, who invented them, what are they made of and so on ...

The official patent holder, read the inventor, is a German called Alexander Böck. So see, at least something positive came out of my native country ;-) The European patent was granted in 2003 and the US one in 2004, but the application process goes back to 1999. You could call them therefor an invention from the last millennium, just kidding ;-) Originally known as Powerskips, they come now under a lot of brand and common names such as Poweriser, Powerizer, Power Stilts, Speed Jumper, Jumping Stilts, Spring Stilts, Powerbocks, Bocks (like the inventors' family name), Kangaroo Boots, Velocity Stilts, Air-Trekkers, Fly Jumpers, Power Skip, PowerStriders, 7meilenstiefel , Jumping Jacks, Pro Jumps, Flying Locust, 7 League Boots, Skyrunner and many more. Ah yes, and the sport itself is apparently called 'bouncing'.

Stilts alone are not enough!

You need the safety equipment also!

They are short stilts that are attached firmly to the athlete's feet and calfs and that consist of a curved foot-plate with a foot pad made from hard rubber that incorporates a spring. Sounds complicated? Browse through the images and videos in this article and you see easily how they work. The athlete jumps and, with the help of his or her weight, compresses the spring, which in turn is released as soon as the weight gets taken away and laid on the other foot. This puts the 'spring' into the jump, very simplified, but that's the principle. The elasticity of the spring allows jumps up to 2m / 6ft high and 3m /9ft wide. When just to sprint jump, for not having a better word, speeds as high as 45km / 70mi have been reported. Actually that I think are a bit exaggerate and creative numbers ;-) More likely, for the average Joe, is to reach speeds of 20mi / 30km per hour.

How to choose the right power stilts

The most important thing to know is your exact weight as this determines the model you will need. So, please don't be shy, admit to the weight you carry around ;-) Apart of this you should also look for a well known brand that carries the warranty of being produced with care. Stay away from cheap imitations, you don't want them to fall apart when you are jumping high, sprinting fast or even doing backflips!

What else do you need

If you have watched one or more of the videos here on this hub, you will agree with me that wearing protective gear such as elbow and knee padding, gloves and a helmet are a really good idea. Power jumping is done on tarmac and concrete surfaces and these are hard when you hit them!

Power Jumping is not difficult to learn, an average, fit person can be up and walking in 10 minutes, but the more advanced jumps, flips and sprints take a lot more time to master. The silts are like a prolongation of your own leg, nevertheless, it is a really good idea to attend a beginners class or course. Especially if you are not sure if this is the right sport for you. Before you shell out a lot of money to buy the latest model, do yourself a favor, go into the biggest sport shop in your neighborhood and ask them if they over beginners classes or courses in bouncing and with rented stilts included.

The same athlete that was responsible for the choreography and training of the power jumping group at the closing ceremony of the Olympic Games 2008 in Beijing set also an astonishing record in 2007 that brought him an entry in the Guinness Book of World Records. Jesus Villa, who uses “Half Animal” as his artists name, did 19 flips in a row and, yes, on stilts!

You can see the video of this World Record on the right and below I added some websites that might be useful for you in exploring the wondrous world of powerbocking further!

I want some of these...!
They look great fun.

Exactly my own feelings / fears, Dustytoes ;-)

Wow these look like fun! I bet I'd hurt myself really bad though.

Thanks a bunch Brenda, yes these power stilts sound a bit like 'broken legs' to me also ;-) SY

I wish I had the nerve to try that. Maybe it's a good that I don't. lol Linking to treadmill article.

For those of us with a sedentary job, exercise equipment that you can use at ...

The Top Electronic Health Gadgets and Gears for Health and Fit...

The top electronic health gadgets are for people who are conscious about thei... 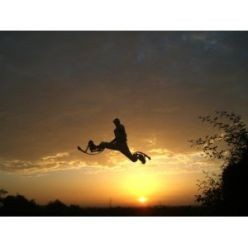 For those of us with a sedentary job, exercise equipment that you can use at your desk while you work can play a key part in keeping fit and healthy.
43%  1   6 WriterArtist
Fitness Equipment 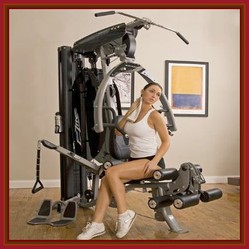 The top electronic health gadgets are for people who are conscious about their health and do not want to take chances. This list is not exhaustive and can change dramatically.
Loading ...
Error!