All eyes are drawn to the bump anyway. Give them something remarkable to look at. Paint your pregnant belly with glorious artwork!

You might be forgiven that you're being creative enough, what with the new baby on the way and all. But there are even more amazing effects that can be produced.

With a few belly paints, and a great deal of imagination, your bump can become the canvas for wonderful works of art. You can use it to make a statement; to tell the world your dreams for the little one within; or merely make it look even prettier.

The only thing holding you back is the will to put body paint to bump and begin.

Let me take you back to a hot, summer's day, full of beautiful people, and one even more stunning than most. 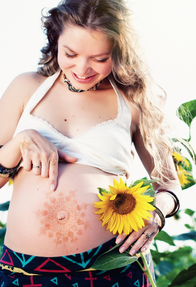 Each year, the Glastonbury Festival arises like Brigadoon from the mists of Avalon. For one week only, it has the largest population in Somerset, eclipsing the nearby city of Bath.

Like a city, the cycle of life goes on within it.  Every festival at least one person dies and one is born.

There are midwives on site for that very reason; and it is not unusual to watch heavily pregnant ladies move through the crowds.  But one year, I watched one lady so remarkable in her aspect, that her image is etched in my memory today.

It was a blistering hot festival, with everyone running around in shorts, vests and t-shirts. She wore a long, hippy skirt and an ornate, beige bikini top. Nothing to catch the eye in that. Most of the women around her were clad in the same.

But her belly was swollen in the late stages of pregnancy; and it was covered in art.

The lady had chosen the Tree of Life as her image. The topmost branches soared right up to her top. The roots picked through the shadows beneath her bump. She, or the artist, was very talented. The whole creation would have looked amazing on flat, board canvas, but painted upon a pregnant belly, it was stunning.

I ventured down there again the next day.  She was around. This time her stomach was decorated as planet Earth, with all its continents and oceans in perfect detail.  It must have taken an eon to produce, but it drew comment from all who passed.

She smiled in acknowledgement at them all.  I assumed that she was indeed the artist.

The most spectacular body art of all was saved for the last day.  I'd wandered down especially to see what she had created today, but it took a while to find her.  She was sipping iced tea in the shade.

Her unborn baby was depicted, in unbelievable detail, floating in a cosmic ocean of stars and planets. The Mother Goddess appeared, painted on the mother's side, Her hands cupping the infant as he slept.

It's been years since that festival.  The baby would be born and looking to begin his schooling now. But I recall that pregnant body art in brilliant detail. It really was that good.

(NB The image isn't her. Unfortunately I have lost the photographs that I took that year!)

Auntie Lisa creates an amazing Caribbean scene for her unborn nephew Timothy. Watch out for his siblings face-painted at the end!

Not everyone who is pregnant is a brilliant artist, but that doesn't mean that their bellies have to go unadorned.

In addition to body paints, there are plenty of other materials available for amazing artwork.

Ladies who want to take Pregnant and Proud to whole new levels can also choose between henna or temporary tattoos.  Or you could push the boat out and use them all!

Some pregnant body paint kits come complete with stencils. Those without confidence in their freehand skills can apply them to create wonderful shapes.

It would certainly be a talking point, as you show your bump art off to the world. And you may find that people like me are still harking back to it years after it's been washed off in the shower.

Henna on a Pregnant Belly

Artist Kaitlyn had a beautiful design for Michaela's bump. It was all caught on film by Katrina Monika.

Products for Decorating your own Bump

Buy these ready-made materials so that you can get creative on your pregnant belly.

I'm glad that you liked it. And yes, her artwork was very beautiful. I imagined her unborn child one day looking back at photographs from that festival, and seeing what Mum did. It must be with some pride.

How cool. I can imagine how beautiful this must have been. Thank you for a most lovely article. The pictures are amazing and the information so interesting.

It was a beautiful moment. :)

Nice story with that woman at the festival ;-)

When I saw it in real life, it looked even better than on the pictures.

Never heard of this - wow the pictures are amazing. I guess it's sticking right out there so why not make art out of it!

We seem to have got over the notion that pregnancy is somehow unnatural. :D And belly art is such a beautiful way of flaunting that nature.

Amazing! To think that not long ago, a pregnant woman kept her belly concealed with a balloon like blouse.

LOL Indeed yes. I would have to way up all of the other facets too, like nine months of carrying it, followed by labor; then that small matter of a life-time parenting it.

But belly art paints definitely tip the balance towards yes!

But ONLY half worth! X

You don't have to be a great artist to come up with something special for you...

So you're pregnant at Halloween. Have you even considered all of the possibi... 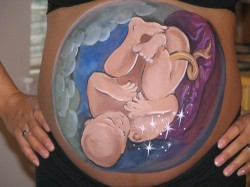 The Art of Belly Painting: Everything You Need to Make Your Pr...
62%  8   5 JoHarrington
Body Painting 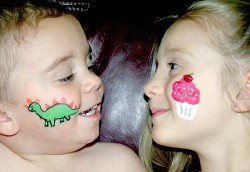 You don't have to be a great artist to come up with something special for your child. Check out these simple face painting designs for boys and girls.
58%  4   6 JoHarrington
Body Painting 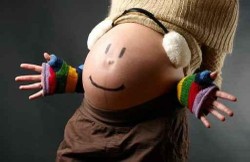 So you're pregnant at Halloween. Have you even considered all of the possibilities here? Turning your bump into a pumpkin is only the beginning!
Loading ...
Error!