Back in the day, Prisoner was a cult classic. Everyone I knew watched it. There were protests when it was cancelled.

When the first Gulf War messed around with the scheduling, my Nan was incensed. "If they don't stop taking Prisoner off for the news, I'm going over to that Iraq and sorting Saddam Hussain out myself!"

My money would have been on my Nan.

Last night I was reminded about Prisoner, when I stumbled across an old episode. Nostalgia ensued.

Relive those classic nights with this set of Prisoner Cell Block H DVDs.

What was Prisoner Cell Block H?

If you even need to ask the question, then you were born sometime after about 1990! 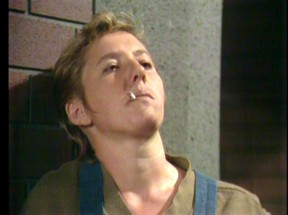 Set in Wentworth Detention Centre, a women's prison in Melbourne, Australia, Prisoner was once one of the most shocking shows on our television screens. Sex, violence, swearing, drugs and drama, it had it all.

Carol Burns's portrayal of Frankie Doyle also held a first. Until she swaggered in as a bullying, lesbian inmate, no soap in the world had ever had a female gay character. She was practically top of the bill.

Originally aired in its native Australia, Prisoner Cell Block H passed in a wave across the world. It had already finished there, by the time we were watching the opening episodes here in Britain. We were halfway through before it reached the Americas.

But we all entered in the same way.  We followed Karen Travers and Lynne Warner, as they were marched tearfully through those clanging gates.  Individuals, who would soon became as familiar as our own families, were first glimpsed through the eyes of these new inmates.

We reacted with shock as Bea Smith attacked. We stared wide-eyed as Frankie trashed the Rec Room. We smirked at how well Marilyn could seduce the electrician to get her way. We calmed right down with Mum in the garden with the bugs.  And that was only the first episode.

Prisoner Cell Block H ran for 692 hour long episodes. The final scenes were some of the best ever produced in a drama series, then it stopped. Prisoner fans all over the world delivered petitions to the networks and marched outside television studios to no avail.

It was finally and devastatingly over.

First Meeting Between the Freak and Bea Smith

The on-going battles between Joan Ferguson and Queen Bea were part of the whole thrill of Prisoner Cell Block H.

It was on for me during the late 80s and early 90s. Usually aired in the early hours of the morning, so most of us taped it. 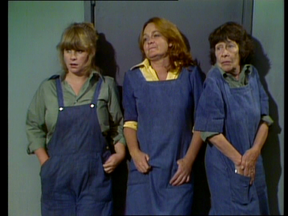 I can picture it so vividly now.  I'd walk into sixth form, on the morning after Prisoner aired, and a whole gang of us would be involved in the post-match analyses.

VHS video recording was only just coming out, so tapes were swopped for those who'd missed it. As the scheduling was so weird (it was on in the early hours and removed/postponed if the snooker went over, or someone dropped a bomb on Baghdad), that could be any of us.

We would speculate on the cliffhanger, and debate who could possibly win, in any given story-line arc. Fluid factions would form around various characters, only to switch loyalties should another reason present itself.

Then I'd nip down to my Nan's flat, where the same kind of conversations would be going on involving my aunties and uncles. Let's be clear about this. It wasn't only the women who loved Prisoner. The men were right there too, whatever they might say now.

It is all so very evocative of my late teenage years; and sometimes even influenced my actions and personality too.

I've read both of these. In fact, I own the second one!

Even while the walls shook and the acting was melodramatic, there was still something empowering about the ladies of Wentworth. 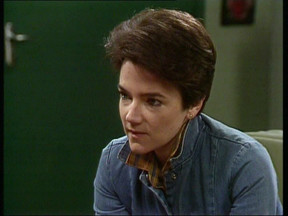 We each had our own people in Wentworth. These were the ones we somehow identified with, or at least cheered on during the fights.

Until last night, I'd forgotten about Reb Kean. She was me in there. It helped that we looked vaguely alike at the time. We were partial to James Dean, and we had a similar quiff.

Only Reb was confident and outspoken, where I was very reserved. Part of me really wanted to be Reb Kean, though perhaps without the criminality. Then I had my big moment to be just that.  In real life, I became her.

A teacher was picking on my little brother.  These days he's twice the size of me and quite capable of looking after himself (and everyone around him). But back then, he was just a child and I was a much more mature eighteen year old.

I was furious about how this teacher had upset my brother, but I was then (and still now) pathetic in verbal confrontations. So I picked out a denim jacket and a comb, then I marched down into the school. I found the teacher.

I can't say that I fully embraced 'what would Reb do?'  That would have probably involved beating the sweet proverbial out of the man. But I definitely went in there as Reb. I would have fallen to pieces at the first hurdle, but Reb could speak her mind. And speak my mind I did.

He was told that if he didn't sort out his attitude, I'd be informing both the headteacher AND my mother. He owed my brother an apology.  He gave me one. I left the room pulling my lapels forward. Anyone watching would have seen Reb stride from the building.

Then I went to pieces outside, as I returned to myself.

Perhaps I could still do with a modicum of Reb Kean in my life today!

This is classic Reb, and apparently what I thought I'd be like, if I was ever in prison! The lapels and comb thing happens around 1.26. NB Strong language warning.

Happy days! Feel free to link to my page from there too. ;)

www.WatchPrisonerCellBlockH.com is a NEW website with all 692 episode of Cell Block H. No annoying adverts or anything either :)

Oooh! I'll have to look out for that. Thanks!

Oooh! I'll have to look out for that. Thanks!

Wentworth starts in the UK next Wednesday. I'm looking forward to it especially with Danielle Cormack as Bea - I really loved her when she was in Xena.

I've heard rumors about this Wentworth. Worth checking out then?

And oh no! You have to find that last episode and watch it! It's a downright classic!

I used to enjoy Prisoner too, but emigrated to New Zealand before the final aired in the UK, my aunt used to write to me about what was happening, but it wasn't the same! I live in Australia now and we've just finished watching Wentworth which is based in the same prison with the same characters - I thought it would be strange seeing different actors playing the roles, but it's actually really good, I can't wait for season 2 to be shot.

It's very nostalgic for me, but it may have been of its time. I would recommend having a look though!

Have to admit I never saw this show! Was it really on in the States? Maybe it wasn't on in the early hours just on a channel I don't pay for ... In any case, I might have to check out the DVDs.

Ah! I didn't realise that Orange is the New Black was similar to Prisoner! I know that you have a new show over in the US called Wentworth, which is directly inspired by Prisoner Cell Block H.

I'll check out the trailer. Thanks! 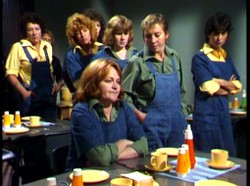