The care of mentally ill individuals has undergone many changes over the centuries.

In all parts of the globe, the comprehension of mental illness has dramatically changed during the last several hundred years. Centuries ago, people believed that it was the result of demonic possession, witchcraft, or unhealthy habits that the patient acquired from family members [1]. Though scientists today acknowledge that environmental influences contribute to mental disease, they have rejected other beliefs of previous generations.

Psychiatrists have developed an interest in biologic and genetic predisposition to mental illness.  Much of this has to do with biogenic amines such as serotonin and dopamine which are neurotransmitters [2, 4].

The development of psychotropic medication during the 20th century has enabled mental hospitals to discharge thousands of patients to the community where they can receive outpatient treatment.

Dictionaries and textbooks provide a variety of definitions for mental health center, insane asylum, lunatic asylum, and mental hospital. Lunatic asylum is an offensive term for a home, hospital, or institution for individuals with mental illness.  A synonym for lunatic asylum is bedlam, which commonly alludes to a scenario where there is uproar or confusion [3].

Insane asylum is a hospital for people who are mentally unbalanced or incompetent [3].

Synonyms for asylum include madhouse or institution which may serve as a shelter, treatment facility, or place of confinement for those with mental disease.  Mental hospital is a modern term for a health care facility which cares for mentally incompetent individuals [3].

The modern community mental health centers utilize a multidisciplinary approach to patient evaluation, diagnosis, and management.  This includes social workers, nurses, behavior specialists, psychologists, non-psychiatric physicians, and psychiatrists.  Such facilities involve the patient in his or her own treatment plan, and the purpose of this is to create an empowerment in which the client makes his or her own decisions and returns to employment and independent  residential lifestyle when those are feasible [1,2,3].

The formation of modern mental health centers and inpatient psychiatric wards in general medical hospitals is a major revision of insane asylums which have previously served as custodial environments for people whose families may not have been willing or able to care for them at home [1].

Though controversy still exists between legal systems and mental health workers as to whether criminals belong in a correctional facility versus a psychiatric hospital, the observations of human rights advocates such as Dorothea Dix were a milestone in altering mental health care [1].

The development of modern psychiatric hospitals is the result of advances in neurobiology, sociology, human rights advocacy, and experience with psychotherapy.

5.  The photograph shows illicit drug paraphernalia and has been reprinted with permission from the Centers for Disease Control and Debora Cartagena. 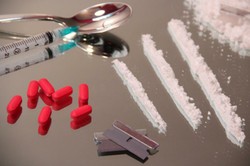