A look at the pubs and bars near the Nang Thong beach in the popular tourist area of Khao Lak in southern Thailand.

Khao Lak is a popular tourist destination in southern Thailand, mainly because of its beaches. But the night life also provides a varied range of bars, though sadly a limited choice of beer. Nevertheless, the walk up the main drag near the Nang Thong beach provides suitable entertainment for the determined and casual drinkers.

The main drag through Nang Thong in the Khao Lak area of southern Thailand is awash with tailors, souvenir shops, massage parlours, restaurants and, of course, bars. Sadly, the choice of beers is much the same in each, with a domination of mass produced Asian lagers from the Thailand brewed Chang, Leo and Singha to, from slightly further afield, Tiger and San Miguel. If Europe is recognised at all, it is normally through Heineken. Most of the bars also have an extensive cocktail range.

The bars here are listed geographically from south to north along the main road.

This is a typical sports bar with two screens showing local and national games, with football from Europe well represented. For those who wish to make their own entertainment, there is a pool table and table football. There is a wide range of seating from normal tables and chairs to high stools at raised tables or the bar. The bar’s Similian Summer cocktail won the local championship in 2013.

A cosy little bar that still manages to squeeze in live music, though normally a solo act. Sports are shown on one smallish screen but that doesn’t impinge on the atmosphere. If you pick the right night, you can enjoy a free barbecue out front. Seating is nearly all around low tables, the lighting is low and the décor tries but fails to be twee.

This is a street bar, literally. A kiosk on the pavement (sidewalk to Americans) serves the beer and customers sit on tables and chairs outside the shops. This makes it an excellent venue for people watching and just soaking up the street atmosphere.

A popular sports bar with four screens showing games, including one behind the bar for enjoying while sitting on bar stools. Most of the rest of the seating is around tables, which are in the open-air section out front. The side room – open plan to the rest of the bar – contains the other three screens and a small number of comfy chairs. The back of the bar is dominated by a pool table. Live music sometimes provides additional entertainment.

Laid back music bar, almost open air. Live rock music entertains those customers not watching the football on the big screen overlooking the bar. In this place, the music wins. The décor is colourful, most of the seating is around low tables though there are stools at the bar, and the atmosphere is relaxed.

Near the north end of the street and arguably the most chilled bar around, this bar is geared to the live music on the stage, ranging from solo artists to rock bands. But this place has so much more going for it, including a vast range of seating from bar stools to intimate cushioned corners and crash mats. The beer selection of Asian lagers is pleasantly extended with a range of bottled German beers.

There are many other bars on the main road and slightly off it, plus the nearby beach has its own selection of bars linked to the hotels and resorts. Sadly, the beer choice is a little limited but the bar atmosphere is very varied.

SteveRogerson, Thank you for practical information, pretty pictures and product lines.
It's too bad that the other bars don't follow Happy Snapper's lead in offering bottled German beer. Happy Snapper also is apparently uniquely welcoming with its "cushioned corners and crash mats."

Would the free barbecue night at Clef Bar be according to some pattern, such as every Wednesday, or would it be unpredictable?

A look at some of the best places to have a drink on or near Kamala Beach on ... 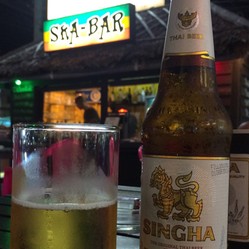 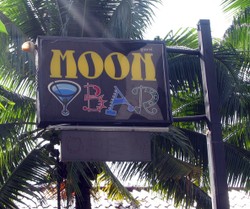 A look at some of the best places to have a drink on or near Kamala Beach on Phuket, Thailand.
63%  1   9 SteveRogerson
Microbrew Beer