Only a few simple and healthy ingredients can get your day off to a good start with a hot, nutritious, and gluten free breakfast in only 15 minutes.

Just the thing to get started in the morning

It's a great way to use fresh blueberries, and it's quick to prepare

My husband decided one day he'd like to try buckwheat to experiment with gluten-free eating. I went shopping and found a creamy buckwheat hot cereal that would cook in ten minutes. One brand called it Cream of Buckwheat. I remembered a Cream of Wheat Cereal Pudding I used to make, and decided to use the same method with buckwheat. I decided it would be even healthier -- not to mention tastier -- if I added walnuts and blueberries to it. The results were so good we now make it often.

What You Need to Make Buckwheat-Blueberry Cereal Pudding

You Will Probably Need to Visit a Natural Foods Store

The brands of buckwheat cereal I used and that are shown below had different cooking directions than I saw on the Amazon site. Mine, three parts milk to one part buckwheat, should work for either of these brands. If you want to compare prices, I paid $6.99 for the Bob's Red Mill Organic Creamy Buckwheat Cereal, 18-oz bag, shown below in my local whole foods market.

Having Trouble Finding Creamy Buckwheat Cereal or Agave Near You?

Amazon has the brands I used to make this and the price is great. Buy enough and shipping is free.

In heavy, two quart saucepan, bring the three cups milk to a boil over medium high heat, stirring often to make sure it doesn't burn.

When milk is boiling, gradually stir in the buckwheat cereal and salt. If you don't stir, it could get lumpy.

When cereal is stirred in, turn heat down to a simmer and cook for ten minutes, covered. Be sure to watch it so that it doesn't boil over . I leave the cover ajar a bit  to release some of the steam. I also stir often to make sure the bottom doesn't burn. When the timer goes off, the cereal should be thick, like that in the picture above.

Turn burner off, and remove pan if you are using an electric stove. Stir in vanilla extract and agave.

You need to pour the beaten eggs slowly into the cereal as you stir vigorously to keep the eggs from solidifying. (See picture above.) The heat in the cereal will cook the eggs enough to make them safe to eat.

Add nuts and blueberries to pudding.

This adds the yum factor

Gently Fold in Blueberries and Nuts.

You stir gently because you don't want to crush the blueberries.

Spoon the finished puddling into bowls. You will have about five cups. Allow 3/4 cup to a cup per serving and add additional milk to thin, if desired, and extra agave or brown sugar or other sweetner if you think it's necessary.

Serve with your favorite hot beverage.

Enjoy knowing your family will have enough protein and fiber to start the day right.

Lots of People Love Buckwheat. Do You?

Have you ever eaten buckwheat?

Why would I want to eat buckwheat?

It's gluten free, low-fat, and packed with nutrients.

Buckwheat is ideal for those on low-fat, low sodium, or gluten-free diets. It's technically a fruit, not a grain, and it's one of the best plant sources of protein. It's also rich in lysine, an amino acid grains don't have much of, and it's a great source of magnesium, a nutrient which helps relax arteries and promotes good blood circulation. If that's not enough, it keeps glucose levels in check better than most  other carbohydrates.

Mira and 2uesday, we're enjoying another batch right now. It's so good in cold weather. Thanks for your comments. I hope you try it and enjoy my Buckwheat Blueberry Breakfast Pudding.

I'll make this tomorrow with frozen blueberries. Thank you for the idea :) I've only used it instead of rice in the past.
Buckwheat is great. It also reduces blood pressure and blood sugar.

WE had it for breakfast for the past three days again.It's been rainy and cold and hot cereal is great.

I love bread pudding and rice pudding as desserts and healthy snacks. I've never heard of buckwheat pudding. It's interesting that it's a fruit and not a grain. I also order a lot of organic products from Amazon. I live along the northern Maine coast and don't have a lot of shopping options.

With the cold weather starting in the Northeast, this hearty snack is just what I'm looking for. When the wild blueberries were ripe this summer I picked a lot and put them in the freezer. This is the perfect use for some of them. Thank you for the very clear instructions.

mivvy, I think if you try it, you'll like it.

A fruit and not a grain, that's interesting. I am definitely going to try this recipe. I often make buckwheat pancakes but never thought of this buckweat pudding or porridge.

hmmm, cream of wheat is also something I've never come across in Australia or the UK! It sounds good though - I'll have to try and source some.

Meagan, picture Cream of Wheat, only it's buckwheat.

Yummo! I'm a big fan of buckwheat but have only ever used it in savoury dishes. Is creamy buckwheat something like rolled oats? This is definitely one I will be trying at home!

it's good enough that we eat it at least three days a week now, including yesterday and today.

How I ate Dessert for Breakfast without Gaining a Pound

Go ahead and indulge. I did. In fact, I even ate dessert for breakfast. In th...

Weird but Delicious Gluten Free Alternatives to Spaghetti You'...

Just because you're gluten intolerant doesn't mean you have to do without pas... 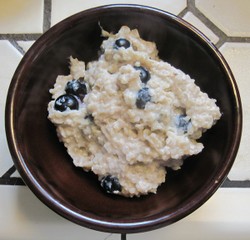 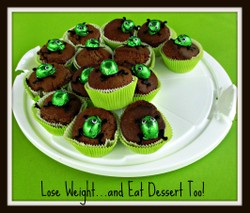 How I ate Dessert for Breakfast without Gaining a Pound

Go ahead and indulge. I did. In fact, I even ate dessert for breakfast. In this article, I share my favorite GF low carb dessert recipes with you and explain how I lost 25 pounds.
100%  24   11 AbbyFitz
Gluten Free Dinners 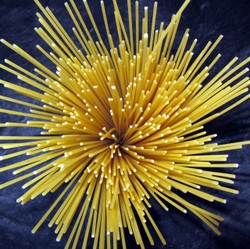 Just because you're gluten intolerant doesn't mean you have to do without pasta. Discover these tasty replacements for spaghetti that will have you saying yum!
Loading ...
Error!