A review of the DiGiorno frozen pizza I purchased and cooked earlier this week as part of a family dinner.

Product Description: Pizza from the DiGiorno Rising Crust Pizza brand advertising four different types of cheese (mozzarella, Asiago, Romano and Parmesan) and a bold sauce. I purchased this pizza for $7.98 at one of our local grocery stores and ended up making it as part of a family dinner Sunday night.

Delicious Crust, a Little Too Much Sauce 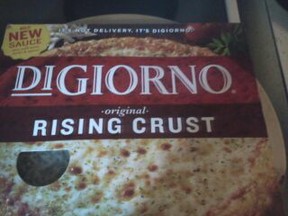 To be perfectly honest, I rarely buy pizzas from the DiGiorno brand. This doesn’t really have much to do with the brand itself. Instead, it has much more to do with the price. Frozen pizza, in my opinion at least, is too expensive and, more often than not, I’ll buy a pizza from the deli of one of our local grocery stores simply because it is more affordable.

However, I had a buy one, get one free coupon for this brand recently and, seeking to stock up for ice skate nights, I figured I would take advantage of it. And, since my daughters like cheese pizza, I made sure this was the first one I picked out. As it turns out, it was an OK purchase. However, our opinion of it was a little mixed.

One thing all of us liked was the crust. We are all fans of thicker crust and I have yet to find a frozen pizza with better crust than this brand. In addition to the thickness, I personally liked the fact it was softer (something I know my youngest daughter appreciates too) and had a good flavor.

I’m not sure if I really tasted four different cheeses on this pizza and couldn’t vouch for it, at least as far as that count goes. However, I will compliment it based on the overall quantity. A lot of frozen brands tend to skimp a bit on the cheese, even when it is supposed to be a cheese pizza. That was definitely not the case with this brand and that definitely made the pizza much more enjoyable than expected.

One of our biggest complaints about this pizza, however, had to be the sauce. This wasn’t necessarily about the taste because it had a good blend of seasonings in it that made it bold without being too spicy. However, there was actually a little too much of it on the pizza. This was especially true of my daughters, who prefer a very small quantity of sauce on their pizza (if it were up to them, the pizza wouldn't have sauce at all). They still ate it. But, I could tell they didn’t enjoy it as much because of this. 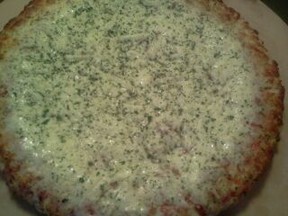 As I said before, this isn’t a brand I purchase very often because of the price. However, despite the overabundance of sauce on this, I did think this was a pretty good frozen pizza option and I would not be opposed to purchasing this again, at least if I were able to find it on sale again. If you haven’t had a chance to try this pizza, then I would recommend picking one up and giving it a try.

I like the deluxe digiorno pizza with onions peppers sausage etc. very tasty. Of course they aren't as good as the local pizza house.

I agree with you on the sauce. I have purchased Digiorno pizzas several times, and while they are edible, I prefer the ones from the stores' delis. They will do in a pinch, especially with a coupon! 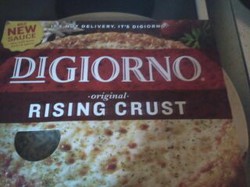