Back after five years, Master Chief finds himself on a new planet, Requiem, facing a new threat: the forerunners.

343 Industries take the reins of the fourth instalment of the Master Chief saga after Bungie pull out of developing the Halo series. Many were concerned as to how Halo 4 would turn out - would it be as good as the rest?

343i certainly did have their work cut out for them, Halo 2 was astounding and Halo 3 being a release game with the Xbox360 gained a massive fanbase, so picking up development of Halo 4 and attempting to keep the fans happy was never going to be easy.

Master Chief awakes from his cryogenic sleep on Forward Unto Dawn falling deep into Requiem's gravity well. Following a crash landing, Chief and Cortana proceed to slay countless covenant before discovering a new race - the forerunners.

Halo 4's story overall is decent. It kept me hooked from start to finish and I enjoyed my playthrough. All of the familiar covenent faces are back as well as a fresh new set of weaponry including extra armour abilities and grenades.

The overall length of the campaign I felt to be disappointing, I clocked just over 5 hours of gameplay playing through on normal difficulty. Even so, it still felt a very detailed 5 hours. I felt that it could've been more challenging, as I died only a few times throughout the entire game, but that's probably due to the difficulty setting.

There's also Spartan Ops, a replacement for firefight which caters for both solo and co-op play featuring objective style gameplay and cutscenes galore. They've been released five per week for ten weeks since the game's release and are enjoyable, but I feel somewhat repetitive.

There's no massive difference in either audio or graphics between Halo 3 and Halo 4. The covenant are slightly different models which is noticeable, but isn't anything to be concerned about.

Chief has undergone a texture makeover and has received a few extra details on his armour suit. It's made him less chunky, but more defined. The human weapons are also re-textured with increased detail and shading.

One of the bigger more noticable differences to the game world's graphics is lighting. It looks a lot more real and natural when compared to Halo: Reach and perhaps even Halo 3. This is to be expected as this is part of the game engine that 343i tore down and rebuilt.

The audio seems beefier and weapons do seem to pack a punch and seem more "real". Some of the audio from Halo 4 are created from live recordings of real guns which is a very nice touch - something that most other games don't do.

Thankfully, the announcer Jeff Steitzer is back and still providing amazing announcements to Halo's multiplayer.

Halo 4's multiplayer is fun, but I'm not as engrossed as I'd hoped. I'm not exactly sure what the main issue that I have with the multiplayer is - but something doesn't feel quite right.

It's not a bad multiplayer, don't get me wrong, but I feel that it's taken too much from Halo: Reach as opposed to Halo 2 and Halo 3. It just doesn't feel as impressive as the others.

The ranking up system essentially mirrors Halo: Reach, so it's based off experience rather than game wins. I personally much preferred Halo 3's ranking system - playing ranked games to acquire a skill level and then having match wins in other playlists to establish the rank.

Halo's borrowed the Create-A-Class system from various FPS games which is both a shame and a fresh change. It's hard to accept this system in place in a Halo game as the main focus is on strategy rather than loadout - if a team controls various portions of a map, they'll gain control of the power weapons while everyone else wields the same gun.

A big blow for Halo 4 is that the MLG (major league gaming) circuit is for the first time since its conception not featuring Halo. This is due to the fact that the multiplayer maps aren't deemed fit for professional competitive play.

This being said, the above may well be a very subjective view as I certainly do have fond memories of Halo 2 and 3. It's a good multiplayer, any new fans to the series will enjoy it, but the potential disappointment for long term fans is there.

In summary, even though when compared to Halo 3 and Halo 2 it's not as good, Halo 4 certainly is definitely a purchase. If you view it as a totally different series rather than an extension to Halo 3, it's much easier to view it in a better light.

Yes the campaign could've been longer, yes the multiplayer could've been improved, but for the sheer fact that it's designed by an entirely different company and still feels like a Halo game, 343i should be happy with what they've created.

Perhaps the next in the series will be more akin to the earlier series - but Halo 5 might be quite a way away and until then, Halo 4 is certainly going to be more than enough to pre-occupy every Master Chief loving gamer.

Love the review and the game.

There's plenty more to come! You'll also know what games to buy any gamers you know of :D

Paul, if you carry on writing these reviews I'll actually *know* all about video games. :)

I'd definitely wait for the next gen of consoles - I'm almost certain games like this will be backwards compatible and yes, you should be able to use your monitor as a screen :)

I really feel that I'm missing out on these big name games, as I haven't got an XBox. I'm sorely tempted to save up for one. Could I play it on my computer monitor, or would I need a television as well?

Borderlands was a fantastic game. Gearbox software set themselves a tough cha...

As previous instalments of the series have shown, you either love the Call of Duty franchise or hate it. Perhaps Black Ops 2 has something to cater for the masses?
88%  6   13 Paul
Video Games 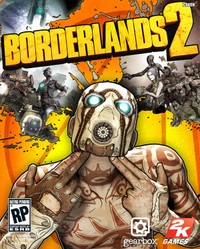 Borderlands was a fantastic game. Gearbox software set themselves a tough challenge of topping it, but I'm glad to say they did.
Loading ...
Error!