I purchased a case of these while at Costco last weekend. Read to find out if they were worth my money.

Product Description: Frozen single-serving chicken pot pies from the Marie Callender's brand. The pies are prepared either in the oven or the microwave. I purchased a case of eight pot pies while shopping at Costco last weekend. I ended up preparing four of these pies last night as an easy-to-make dinner.

My wife and I needed to make a run down to Costco last weekend to pick up a few items we were running low on or were out of completely. As is usually the case when we visited that store, we ended up filling our cart with quite a few other great deals.

One of our spur-of-the-moment purchases was a box of eight Marie Callender's frozen chicken pot pies. I don't remember the exact price we paid, but they were at a decent price and we figured they would make an easy-to-make dinner when we were short on time (or just didn't feel like cooking).

I've had this product in the past. But, because the pies are quite a bit more expensive than the Banquet pot pies and some other brands, it had been a while since I had eaten one. And, as a result of that, I wasn't really sure if they were going to be worth my money or not. As it turns out, they were much better than I was expecting.

I ended up preparing four of the pot pies last night because my wife and I had been running around all afternoon and my youngest daughter had dance class in the evening, giving us no time to make anything more complex. Even though the microwave instructions would be faster, I decided (mostly because it meant I could make more than one pie at a time) to cook these in the oven. And, overall, I had no complaints about the product.

One thing I noticed right off the bat was the outer crust managed to get crispy in the oven. This is not the case with a lot of the cheaper brands, which usually end up very soggy and fall apart easily. While this honestly isn't an overly big deal, it was kind of nice being able to remove the pie from its tray, have it be in one piece and cut into it with my fork.

The pies also proved to be much more filling than the cheaper brands, mostly because there were large pieces of chicken and carrots inside of them. Again, this isn't the case with the bargain pot pies, which usually consist of little cubed pieces.

Another thing I found I liked about this product is there was actually an effort to give the pot pies some flavor. I could taste some pepper and other seasonings when eating this product, something that I honestly wasn't expecting from my experience with other frozen pot pies. This, of course, only enhanced my overall enjoyment.

Even with the great deal we got on these pies at Costco, they are still more expensive than many of the other frozen pot pie brands. But, if you have the extra money to spend, they are well worth it.

Marie Callender's makes a really good potato-cheddar-broccoli pot pie too, but sometimes it's hard to find. I agree that they are a little expensive, but very filling.

We really like these chicken pot pies too! They certainly taste better than other brands. Great crust too!

I purchased a bag of these a couple weeks ago at Costco. Read to find out wha...

I purchased this at Costco a few days ago. Was it worth the money? 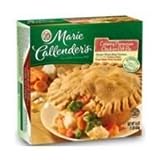 I purchased a bag of these a couple weeks ago at Costco. Read to find out what I thought of them.
46%  1   6 StevenHelmer
Other Food & Cooking

I purchased this at Costco a few days ago. Was it worth the money?
Loading ...
Error!