Scientific Facts About Sugars and Other Sweeteners

Not every apple, which contains "natural" sugar, and not every "low calorie" or "no sugar" food may be as good as you may think. On the other hand, not every ice cream or chocolate cake may be as bad as you may believe.

Sugars by themselves do not make you fat or diabetic. There is increasing awareness that quickly absorbable carbohydrates, such as white bread or pasta can increase the blood sugar levels after meals at least by the same extent as sugars. So, if you want to avoid a quick surge of sugar into your body you might want to try whole-grain bread and other slowly absorbable carbohydrates.

There seems to be no scientific proof that natural or artificial sugars or other sweeteners mentioned below increase the risk of cancer or other diseases. If you do not believe this, you can still avoid them.

This article is meant neither pro or against sugars and sweeteners but to describe what the reviews of studies say.

The above claims base on results of many systematic reviews of studies you can find on Nutrients Review.

Glucose is a simple sugar, which naturally occurs mainly in fruits. You cannot live without glucose, but you do not need to consume it in order to be healthy, because glucose can be produced in your body from other nutrients, such as fats and proteins.

Glucose is also a part of most other sugars. Most carbohydrates, including starch, are digested or metabolized into glucose.

Glucose (on food labels: dextrose or just "sugar") is quickly absorbed, so it can be used as a quick source of energy as an ingredient in sport drinks or energy gels. It is also the most appropriate sugar to correct low blood sugar levels (hypoglycemia).

In people with diabetes mellitus, glucose from foods raises the blood glucose levels the most among all sugars.

There is insufficient evidence about harmful effects of moderate glucose consumption on weight gain or diabetes mellitus in healthy individuals.

Fructose is similar to glucose but is absorbed slower. In your liver, fructose is converted into glucose. There has been a lot of discussion about how fructose is metabolized in your body differently than glucose, but this does not seem to have much practical importance for healthy people.

Fructose is sweeter than glucose and sucrose, so you can use it less to achieve the same sweetness and thus consume less calories.

Fructose has a low glycemic index, which means that it increases blood glucose levels less than glucose, so it is considered an appropriate sweetener for diabetics.

Fructose is absorbed slower than glucose, so by mixing fructose and glucose in a sport drink, you can get a more sustainable source of energy.

There is no convincing evidence about the association between fructose consumption and weight gain that would be greater than the one from glucose or sucrose.

In some individuals, large amounts of fructose (>50 grams per day) can increase the blood triglyceride levels.

In individuals with fructose malabsorption (which is relatively common), consumption of even small amounts of glucose, for example 5 grams, can trigger abdominal bloating, excessive gas, nausea and diarrhea. Foods highest in fructose are apples, pears, mangoes, agave, honey and beverages with high fructose corn syrup (HFCS).

In individuals with a rare genetic disorder fructose intolerance, even very small amounts of glucose (less than 1 gram) can cause severe abdominal pain and nausea and larger amounts can be life-threatening.

HFCS is a liquid sugar, which is semi-artificially produced from corn syrup. It is mainly used in soft drinks, such as cola. It contains 55% fructose, so it is not much different from sucrose which contains 50% fructose. In HFCS, fructose and glucose are split, while in sucrose they are bond together, though.

According to one review of studies in Physiological Reviews, there is no evidence of any harmful effect of HFCS that would be greater than those of sucrose.

Tagatose is a semi-artificial sugar similar to glucose; it is produced from whey. It is poorly absorbed and provides only about 2 Calories per gram. Currently, it is used mainly in Japan and South Korea.

It is a little less sweet than sucrose.

Tagatose has a low glycemic index (GI = 3), so raises blood sugar levels much less than glucose and sucrose.

Sucrose or table sugar is composed of glucose and fructose.

There is insufficient evidence about harmful effects of sucrose in otherwise healthy individuals.

In individuals with a genetic disorder called sucrase-maltase deficiency, sucrose can trgger diarrhea.

Trehalose is a sugar very similar to sucrose but it is less sweet; it is semi-artificially produced from corn starch.

Trehalose is Generally Recognized as Safe (GRAS) in the United States and also approved and commonly used in Japan, Taiwan and South Korea.

Trehalose has a lower potential to cause dental caries than sucrose.

In individuals with a rare genetic disorder trehalase deficiency, trehalase can trigger diarrhea.

Lactose is present in milk products, mainly in milk, yogurt and ice cream, in much smaller amount in cheese and is not found in butter.

Lactose can be added as a sweetener to beer (milk stout, cream stout, sweet stout) and various food products, such as protein powder.

Lactose is a source of energy.

In individuals with lactose intolerance, which is common, a large amount of milk (usually more than 1 glass), or commercial protein powder can cause bloating and diarrhea.

Sorbitol and Other Polyols

Sorbitol is a "sugar alcohol" or polyol. It is a poorly digestible carbohydrate, naturally occurring in grapes, prunes and cherries, or semi-artificially produced from glucose syrup and used in "low-calorie" or "no-sugar" food products, such as chewing gum and soft drinks.

It has about 2.5 Calories per gram.

Sorbitol has a low glycemic index, so it can be suitable for diabetics.

Other polyols similar to sorbitol are isomalt, maltitol, mannitol and xylitol.

Erythritol, unlike other polyols, contains almost no calories and does not raise blood glucose levels after meals, so it is suitable for diabetics.

Glycerol (edible glycerin) is classified as polyol, but is much more similar to sugars than to polyols: it is about as sweet as glucose and has about 4 Calories per gram, like other common sugars. Natural vegetable glycerin is obtained from vegetable oils (palm, coconut or soybean oil) and natural animal glycerine from animal fats, such as beef tallow. Glycerin can be also semi-synthetically produced from cane or corn sugar syrup. No harmful effects are known.

Non-sugar sweeteners are not carbohydrates, do not contain calories and do not raise blood sugar levels.

Acesulfame K is available as a commercial product with a brand name Sunett or as added sweetener in soft drinks, frozen deserts and bakery. It is up to 200 times as sweet as sucrose.

According to The Joint Expert Committee on Food Additives (JECFA), the scientific advisory body to the World Health Organization and the Food and Agriculture Organization of the United Nations, acesulfame K is safe to use as a sweetener.

Aspartame (commercial products: Equal, NutraSweet) is chemically a methyl ester of the amino acids aspartic acid and phenylalanine. It is about 200 times as sweet as sucrose.

Aspartame is safe to use according to the Food and Drug Administration (FDA) in the United States and European Food Safety Authority (EFSA).

Individuals with a genetic disorder phenylketonuria need to avoid aspartame, since it is metabolized into phenylalanine.

Saccharin (commercial products: Sweet'N Low, Sugar Twin) is an artificial sweetener; chemically it is benzoic sulfimide. It is up to 400 times as sweet as sucrose.

Based on studies in rats, saccharin was once classified as a possible human carcinogen, but later studies have not confirmed that saccharine would cause bladder or any other cancer in humans.

Stevia (commercial products: Truvia, PureVia, SweetLeaf) is a very sweet natural sweetener extracted from the leaves of the plant Stevia rebaudiana. It is up to 300 times as sweet as sucrose.

Pure stevia contains no calories, but the commercial stevia products can be mixed with maltodextrin and can contain about 2 Calories per gram.

Sucralose (a commercial product: Splenda) is artificial sweetener produced by chlorination of sucrose. It is up to 1,000 times as sweet as sucrose.

There is no evidence about any harmful effects of sucralose. Regular consumption of sucralose can make you consume more sugar, though.

The main consequence of exceeding Acceptable Daily Intake are gastrointestinal issues, like bloating and diarrhea. Fructose, sorbitol and other polyols (xylitol, maltitol) most likely cause these issues.

It is amazing how much sugar is included in SO many foods. I stay away from sugar, I think of it as poison, expect for pure maple syrup and stevia which I rarely use. The science behind sugar is very interesting impacting the human body in so many ways. Great article, thanks for adding the daily allowances, I had no idea how much stevia I could use daily, I buy the liquid type, I find it is easier to add when cooking. 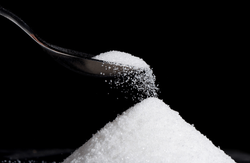