Fans of naturalist painters, The Glasgow Boys, can see their work at the Kelvingrove Art Gallery, Glasgow where there is now a permanent gallery devoted to their pioneering work.

In 2010 an exhibition at The Royal Academy London called "Pioneering Painters: The Glasgow Boys 1880-1900" proved a resounding hit with the public. As a result, a permanent gallery devoted to The Glasgow Boys has now been set up at Kelvingrove Art Gallery in Glasgow.

The Glasgow Boys (also known as the Glasgow School) rejected the traditional, conservative art of the dominant Edinburgh artistic elite in favour of the realist works of French artists such as Millais and Bastien-Lepage. They also admired the American painter, James McNeil Whistler.

The artists featured in this article represent the nucleus of the Glasgow Boys but there were other artists who drifted through the Group and who also influenced them.

The Glasgow Boys and The Scottish Art Establishment

Queen Victoria loved Scotland.  As a result, in the late nineteenth century, romantic landscapes, society portraits and sentimental pictures of the poor dominated the Edinburgh Academy and the Glasgow Institute.

Landseer's stunning painting of a stag, Monarch of the Glen, was typical of the works of art that glorified Scottish pride through scenes of glorious lochs, mountains and wildlife.

But times were changing.

A few modern paintings from Europe and London found space on the walls of the Institute, offering a rare view of radical developments in the art world beyond Scotland. Young painters were beginning to be  inspired by French paintings of agricultural life and work depicted with realism and a lack of moral tone.

His work influenced The Glasgow Boys

In 1877 four of the future Glasgow Boys ( James Guthrie, Edward Arthur Walton, James Paterson and William York Macgregor) were all refused membership of the Glasgow Arts Club. Unable to study art in London, Guthrie opted for art classes at the St Mungo Art Society in Glasgow, a simple club free from artistic constraints. Here he met Walton and Joseph Crowhall.

Paterson and MacGregor had gone to school together and both studied at Glasgow School of Art. However, MacGregor left to study at the Slade in London. Here he became familiar with French realist painting through his tutor,  who was a friend of Edgar Degas.

The Glasgow Boys – Off to Paris!

As individuals some Glasgow Boys would travel all over the world, including Japan and Morocco, to paint. But in the late nineteenth century the hot-house atmosphere of the Parisian cutting-edge art world was the place to be!   And what a contrast it must have been to Glasgow!   Imagine being a young man in vibrant Paris, young men full of life and talent, able to work in complete freedom!

All the Glasgow Boys were united by their enthusiasm for the French habit of painting outdoors in natural light – a method known as plein air.

Plein air painting was initiated by the Baribizon artists, a group of painters who, in 1848, worked in the village of Barbizon, near Fontainebleu in France. They were influenced by the English painter, John Constable, and their aim was to counteract Romanticism and bring a new reality to their work by painting rural life without sentimentality. (Paul Gauguin worked en plein air in Brittany whilst developing his increasingly Symbolist style.)

Moonlight in the Barbizon by Charles-Francois Daubigny

An Artist of the Barbizon School who Influenced the Glasgow Boys

On their trips back to Scotland the Boys spent time in the village of Cockburnspath in Berwickshire which served the same objective –  working outside in the landscape with a new realism, freshness of colour, an interest in tonality and bold, visible brush-strokes.

Their subjects, agricultural labourers and peasants, were painted with a dignity usually reserved for society portraits and a monumentality normally associated with history painting.

Have a look at this painting, Old Willie,  by James Guthrie (below).The same status is given to this dignified elderly man as would have been given to a duke. He is the main subject of the work, his upper body dominates the canvas and he looks out at the viewer with a gaze that is frank yet vulnerable.

The Glasgow Boys – Acceptance by the Establishment

The Glasgow Boys found respect and acknowledgement in London, America and in Europe. Their work became less naturalist and developed a more decorative, linear and Symbolist approach. Some of their work came to be exhibited at the Royal Academy in London.

But what they ultimately desired was acceptance by their own Scottish art establishment.

As the years went by many of the Boys did become acceptable to the Scottish art establishment by compromising their art. Others drifted away from Scotland altogether to pursue their own projects or to protect their artistic integrity. Ties of friendship were inevitably broken.

Whilst never quite relinquishing all they had learned from their foreign experiences, for some of the Boys inevitably the paintings of agricultural labourers gave way to more profitable portrait paintings, often influenced by Whistler, or depictions of the lives of the rich middle classes.

Amongst the inevitable backward-looking subjects, some fine pieces of work were produced which showed middle class life in a realistic light. In particular, The Tennis Party by John Lavery (below), although not popular with the Scottish establishment, was an extraordinary example of realism applied to a modern subject.

The Glasgow Boys – Their Legacy

The Glasgow Boys, were products of a mighty industrial city. They were  acknowledged as masters of naturalism in Europe and America, but were unappreciated in Britain for many years.

Now, however, they have been given their rightful place in British art history.

Despite the conservatism of their later years and their rejection of artists like Matisse, there is no denying that the dogged determinism of the Glasgow Boys paved the way for the next generation of great British painters – the Scottish Colourists.

Here is a link to the Kelvingrove Gallery in Glasgow where you can see the permanent collection of The Glasgow Boys.

Thank you very much 2uesday. Yes, I agree, he is one of the top favourites!

Hello Peggy. Yes, the original exhibition held at the Royal Academy was a huge success - so after that the Kelvingrove Gallery in Glasgow realised how much the public loved the Glasgow Boys and created the new space specially for the paintings. I haven't been there myself, although I did see the exhibition at the RA and it was great! Thanks for your post.

What wonderful artwork. This would be a great exhibit to see. 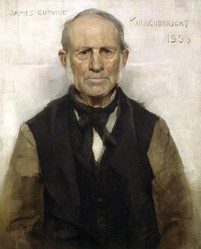 This work by Edgar Degas illustrates an aspect of the emerging dynamics of 'modern life'.
17%  0   2 KathleenDuffy
Famous Painters

Despite gloomy predictions about the railways, Turner's 'Rain Steam and Speed' used an optimistic, painterly language to depict the new mode of travel.
Loading ...
Error!