Skull home decor isn't just for Halloween. Add a playful and macabre touch to your table with these skull salt and pepper shakers.

Skull decor is part of a larger trend in Gothic decor. I think that has really been passed down from the Victorians who just love skulls and thinking about death. Many of them went on expeditions to Africa and the South Pacific and came back with many ghoulish artifacts. I live in a rambling fixer-upper that was built by a 19th Century sea captain, who traveled the world. I admit that skull decor fits the sometimes foreboding gloominess of this house.

Day of the Dead Skull Salt and Pepper Shakers

Red Hearts show they only have eyes for each other!

This bridge and groom skull set are really stylin' in their decorative and traditional headgear. I often see a connection to Day of the Dead style and the voodoo styles that I see in New Orleans. The groom salt and pepper shaker has a black hat with red band and the bride has a scarf and flowers.

Day of the Dead skulls are always smiling. Most artists frame their mouths in red. This alone makes them appear far friendlier than other skull styles. Then notice the eyes. Day of the Dead artists usually fill them with flowers. Red roses are very popular. However, red hearts were used to give these skulls an romantic vibe. An inverted black heart is used for the nose.There are red hearts for ears as well. The liberal use of black in these designs prevents them from becoming just too sweet.

See the cross on the groom forehead. Day of the Dead designs often have one. I'm pretty sure that's because it's about the same time as All Souls Day in the Catholic church. That's the one that I'm used to celebrating.

The remainder of the design could have been stylized flowers and swirls that my great grandma painted on the back of chair in Maine. It's a reminder that these skulls started out as folk art to remember deceased relatives.

Day of the Dead White and Blue Salt and Pepper Shakers

Pair with a red tablecloth for a fun summer picnic

Because these skulls aren't wearing hats, you get the full impact of the skull shape. These salt and pepper shakers measure 4 inches tall. So they are a good size and will create a statement on your table.

It's good for your home to have a personality. I know that my family affectionately refers to my home decor as Digby's Dingbat Style. Thankfully my husband just smiles when a new little piece arrives.

I admit that I really miss my great grandparents who aren't with us any more. I don't think they mind that I have Day of the Dead skulls and that I talk to them sometimes as if my grandparents were having coffee with me.

If the light blue and white skull salt and pepper shakers didn't make a big enough statement for your tableware, this red and black set should do the trick! The red heart eyes look almost like a Valentine with the scallop trim around them. The black skull has yellow teeth rimmed in brown and the red skull has white teeth rimmed in green. Individually outlining each of the teeth gives the skeleton smile even more punch.

I do think of salt and pepper shakers as functional art and I probably have too many. However, when I'm not using them on the kitchen table, I display them. At four inches tall they can be tucked into almost any display on a fireplace mantle or on an end table.

Layers of design keep our home interesting and fresh. I know when friends come over, I see them sneaking glances around. They think it's fun to see what's been tucked in here and there.

Perfect for Halloween buffets or horror movie night in

I doubt if I would want to look at this creepy human skull salt and pepper shaker holder set while I'm drinking my morning coffee. It's a different design than the others because the salt and pepper shakers are plain and fit in the skulls eyes. When they both come out, you are left looking at a human skull. (Yes, it is most definitely a FAKE skull.)

We have a home bar where we hang out and eat burgers and play pool with our friends. This would do nicely in there. It's a dark space a little on the creepy side. We also have a large screen television there and like to watch movies with friends. Often we watch silly 1950s horror or science fiction movies.

Skull decor is perfect as we watch some reptile attack America. It's always reassuring when we beat it back into the ocean. A lot of beer and chili is consumed during this battle for good and evil. We do keep salt and pepper shakers down there, because someone always thinks I don't put enough salt on things.

Fantasy fans will love this salt and pepper set

This should really be called a skull salt and pepper shaker holder. However, I think it fills a home decor niche for people who are into dragon slaying role games or books. I know that we have a lot of fiends who read books with dragons on the covers.

When you take out the salt and pepper shakers you can put tea lights in the eyes. Very cool for a dinner centerpiece.

Tell me that this doesn't look like Hello Kitty met some space aliens and the had salt and pepper shaker babies. This is the perfect gift for your friends who believe that there is still something fishy going on at Area 51.Yes the eyes are hearts, sort of.

Other than the fact that I am scared of human skulls, the shakers are pretty and colorful. I am aware that in many customs, people celebrate/worship/pray for "dead". Many tribes do the rituals and it is common thing.

Omg....so pretty and so scary too, pinning it

Thank you so much for the pin!

Cute ideas for salt and pepper shakers. Pinned and shared on netboard. 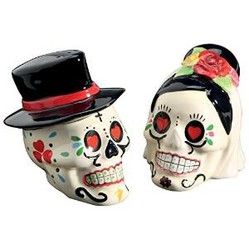 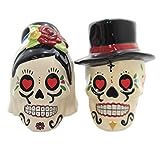 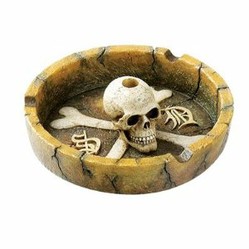 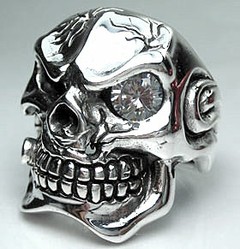