There are many specialty light sets that can be an added decoration for a theme party, and many can also have holiday uses.

The light strings that went out all at once were wired in series, where the current flowed through the lightbulbs one after the other. If a filament burned out the electrical path would be broken, and the whole string would go out. The ones that operated independently were wired in parallel, so the current passed through each light bulb from one side of the circuit to the other independently. If one lightbulb burned out the rest were still passing current, so they would still light up.

All of the lightbulbs had an appearance to mimic that of a candle, a glass shape that was widest near the base and tapered towards the tip. The ones that went out all at once were narrower than the others. And, the color of the ones that went out one at a time wore their colors thin and showed spots after years of use.

The bulbs were not interchangeable, since they had different size sockets that they had to fit.

Introduction Image: Yoda light set on Amazon. This product is shown below.

Lightbulbs of Years Gone by, and Still Available Today

Bubble Lights existed for both kinds of light strings.  They were long, liquid filled bulbs that also had a larger reservoir of liquid at their bases, and a light within the base.  The liquid was colored, and they came in a nice range of colors.  When the light was on a few minutes the heat would vaporize some of the liquid which would make bubbles that would rise through the tubes.  The vapor would then cool and go back to the liquid state, so a constant stream of bubbles would be visible as long as the lights were turned on.  Some people bought entire strings of bubble lights.  Of course, care had to be taken that the tubes were always oriented upwards.

These bubble lights are attractive, and still can be purchased.  Just make certain you have a light set that can accommodate them if they do not come with a light string.

Available for Many Holidays and Party Themes

Today we have smaller lights, and much cooler lights.  Having cooler lights allows covering the light bulbs without the same high risk of fire that would have existed with older style lightbulbs.

Add Lights to Your Decorations

There are light sets that clearly are Halloween decorations.  Christmas trees with Star Wars androids is about as far as one can stretch things.  Scary lights are by their design relegated to Halloween.  Yet, if you are having a Halloween party they make great decorations.  String them from a ceiling or lay them across a mantle and get your guests marveling at how creative you are.  Make that party special.

So, you have a luau planned.  And, you are thinking only hanging lanterns are available.  Well, other exciting option do now exist.

Luau Lights to Brighten Things Up

There are many more decorative light sets available.  But, some have disappeared.  I no longer can find a couple of Disney light sets that were there a year ago.  Perhaps it is because of slow sales, or perhaps it was that they were not licensed.  In any event, more have come out, and a few have gone away.

Those are probably new. I did not see them in the past. I like to include these light sets into my theme party articles. so I do look for them.

Oh, I DO like the flower set of lights. How perfect they would be on patio or poolside! 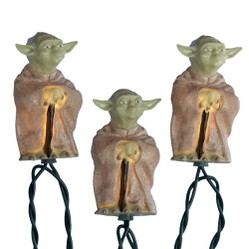 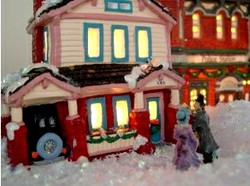 Paint your own Christmas village and save a lot of money, while creating valuable family memories.
100%  15   8 AbbyFitz
Christmas Decorations