Nestled next to the runway of John Lennon airport, Liverpool, and near the estuary to the Irish Sea, Speke Hall is a charming and beautiful medieval house and my favourite of all.

I had a beautiful day out today to Speke Hall, Liverpool which is owned by the National Trust.

Evidence shows there was a large old house on this site in Saxon times ( from about 800AD ) but the present house building phase started in 1530. Parts of the earlier house are included in the Tudor building.

The Great Hall was the first part of the house to be built, in 1530. The Oak Parlour was added in 1531.There were several house building phases between 1540 and 1570 and then all major alterations were made by 1598.

The house stands close to the edge of the River Mersey on the way up to the estuary to the Irish Sea and also is next to Liverpool, John Lennon Airport. The runway is almost in the garden.

The Moat is now grassed over.

It is a lovely day out.

Arriving at Speke Hall, the first thing we encountered before reaching the house was this Maze. There are some beautiful compass vanes and also these lovely wooden viewing points above from  which we could view the maze below but also see across the runway and the River Mersey over to the Welsh mountains.

It is autumn (Fall ) of course and the trees were hanging heavy with fruit in the orchards. The kitchen gardens were full of beautiful fresh foods which are used in the on-site café and restaurant.

Tomatoes and artichoke in the kitchen garden

Just look at the decoration on this house. This was seen as a sign of wealth at the time. The house has many features including an internal courtyard, a priest hole and an observation hole built into a chimney in a bedroom to allow the occupant to see if  soldiers were coming so they could warn the Catholic priests in hiding. It was illegal to be a Catholic and to shelter a Catholic priest at the time and Speke hall was a secret Catholic house.

You can see them up above at the side of the bridge.

Saxon fireplace in a Tudor house

A Saxon fireplace from an earlier house has been included in the 1530 building. I couldn't get too close, but it is below.

In the house and under the eaves

In the middle of the house there is a courtyard with trees- inside the house structure.  Up above in the eaves are listening holes and the occupants could hear everything that visitors were saying in the courtyard. This is where the term eavesdropping came from.

William Morris was a Victorian textile designer, artist, poet and social reformer and he is famous for his designs for wallpaper. The house is full of William Morris wallpaper, an example of which is above.

The ceiling below is in the Oak Parlour and was made in 1611. Beautiful detail.

Afternoon tea was set out in the Oak Parlour.

A priest hole was an essential feature of many Tudor Halls and this one is a fine example. It has a ladder up to the top of the house so that Catholic priests who were hiding in it could escape capture by fleeing down the garden into a boat and sail out to ships in the Irish Sea and over the sea to Ireland. It was also used to see if any soldiers were coming to the house, although this was a remote area of Lancashire.

I always love the kitchens ( above ) in these big old houses. To me, this is where the action and hubbub of the house took place. I also like looking at the old kitchen utensils and seeing how those people in former times cooked without any of our modern conveniences.

This kitchen does not disappoint.

The back of the house

The back of this house is as beautiful as the front. The Catholic priests would have escaped along here to the River Mersey and waiting boats.

Out to the River Mersey

The listening holes above the inner courtyard pictured above are like small slits in the wooden eaves.

Frank and I were both students in Liverpool at different times ( as he is years older than I ) and we can both attest to dreadful fogs which come in off the Irish Sea. They used to linger for days because of the air pollution but the UK has improved air quality which has eased fog problems. It was very easy for ships to go down in fog in the Irish Sea. The ships waiting to whisk away escaping Catholic priests were very brave indeed. Fear of capture and execution and also fear of fog!

Veronica, It's my understanding that pre-twentieth century homes could be quite savvily constructed in regard to ventilation and in terms of hearing what was going on around the premises. What did observation holes look like? Is the Mersey the place in the United Kingdom where people go missing because they get disoriented in the fogs?

Yes indeed. Their faith and determination though were remarkable.

With the amount of winter rain that we have been having we can now know something about what it was like in the past. Even with modern vehicles I have had to avoid flooding in winter in the North West. I suppose that a flood and a swamp are better than being hanged, drawn and quartered.

Travelling in winter in NW England can still be a grim endeavour :)
Speke Hall was definitely a leaving point for priests to get to Ireland.

Priests could go to Ireland, but in the Mersey fogs you could go anywhere on the coast without being observed. I suggest that priests would have been very secure in Winter, as no one travelled without urgency in Winter in the sixteenth century, as doing so was a grim endeavour. When the weather was not wet it was freezing; and it was safe for fugitives with someone to shelter them.

By the way, Veronica and I both attended the same college in Liverpool,though not at the same time.

I got to know the fogs there as I did my second teaching practice in Speke, in late Autumn!

You are right Frank. Speke Hall was ideally situated as an escape for priests. Boats could whisk them away over to Ireland and as you say, Speke Hall was marshy terrain and difficult for the authorities to gain access there.

As for fogs, in my student days in Liverpool there were plenty of those.

Yes indeed it was a very dark time in British history and went on for years with several being executed for the faith. Many old houses had priest holes.

Speke had an advantage when it came to sheltering fugitive priests. At that period South Lancashire was still very boggy, with large areas of swamp that made travel difficult. In wet conditions Speke would have been hard of access, and being near the river Mersey, when necessary a priest could be in a small boat and away to safety. The area is also prone to river fogs, so once a priest was away in a small boat, no one was even going to see him. 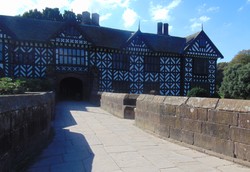 The traditional food eaten by people in the North West of England was shaped by poverty and an Irish influence from across the water.
80%  18   6 Veronica
Local History

1819 will see the bi-centenary of The Peterloo Massacre when an armed Militia were sent in to attack a peaceful demonstration of people who had come for a day out.
Loading ...
Error!