November 30th is celebrated by Scots throughout the world as St Andrew's Day; but what's the story behind a Byzantium saint coming to Scotland?

When Jesus Christ began to gather together His apostles, St Peter and St Andrew were the first people called. They were brothers and fishermen; present at many important moments with Christ.

St Andrew later preached all along the Black Sea and the river banks of Eastern Europe. Traditionally, he founded the See of Byzantium (later Constantinople) and he is named as the city's first bishop.

So why was a man, crucified as a Christian martyr in Turkey, chosen as the patron saint of the Scots?

How St Andrew Converted the Picts to Christianity

It wasn't the Scots who chose St Andrew, but St Andrew who chose the Scottish people. His was a valuable, life-saving patronage. 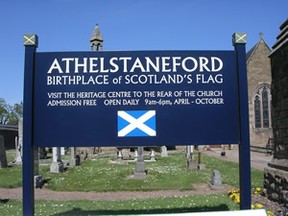 The battle was not going well.  Óengus mac Fergusa, King of the Picts, had given it his all, but his men were being out-classed and slaughtered at every turn.  It was going to end badly.

It was around 750 when the perennial skirmishes for territory, up and down the Scots-English border, had erupted again into this.  Athelstan of Northumbria had pushed right up into the lands of Cennrígmonaid; and the Dál Riata king, for all his skill and courage, could not hold them back.

Night fell and both armies retired to their camps.  The English side were jovial, certain that they would win on the morrow.  The Picts were more subdued, yelling defiance at each other's slips of faith, over the campfires in the night.

As for their leader, Óengus II was sleepless with worry, yet he knew that he had to be at his best on that battlefield next day.  He finally slipped into a restless dozing, which in turn took him into the strangest dream.

St Andrew was in Constantinople. He turned and looked at the troubled Óengus mac Fergusa.  Then he spoke and, despite their divergent languages, the Pictish king understood the words of Jesus Christ's First Chosen Apostle.

"I will help you win this battle, but in return you must make me Patron Saint of Scotland."

Stunned, the Pictish monarch agreed.  What else could he do?  His relief was palpable, as he seized this one chance to repel the vicious English.  Then he woke up.  It had only been a dream.  And this was the reality.  They were going to get massacred.

Nevertheless, there was no option but to ride out into the battlefield.  Armored and ready to meet his Fate, Óengus mac Fergusa led his men against Athelstan again.

But as they drew swords to clash, Óengus happened to glance up.  A cluster of clouds had appeared in an otherwise clear blue sky.  Nor were they behaving like normal clouds.  They were edging together and forming a shape.  The cross of St Andrew hovered over the battleground!

The white lines recall the clouds that formed that day, while the rest of the sky was blue. It's also the shape of the cross on which St Andrew is said to have been crucified.

It was all the omen that the Pictish king and his men needed.  They fought hard and bravely, and they won the day. The place where the battle was fought became known as Athelstaneford; outside ancient Cennrígmonaid, now renamed St Andrews.

From that moment to this, St Andrew has been the Patron Saint of Scotland.

Nor was it all.  The holy visitation in his dream convinced Óengus II that he should embrace Christianity.  His overnight conversion caused the religion to move from a few isolated enclaves to overtaking the whole population.

Who converted the Scottish people to the Word of Jesus Christ?  St Andrew did!  In a dream on a battlefield!

To mark his new piety and religious fervor, Óengus sent envoys halfway across the world into Constantinople itself. Their mission was to find and bring back any relics of their patron saint that they could find.  This they did, returning with fragments of St Andrew's actual bones!

They are still in Scotland now, in the care of St Mary's Roman Catholic Cathedral in Edinburgh.

Display the Scottish Saltire with pride! A great many products include Scotland's flag, I've chosen just a few.

The Truth about St Andrew and Óengus mac Fergusa

It's a great story, isn't it? It's such a pity that barely a word of it is actually true. 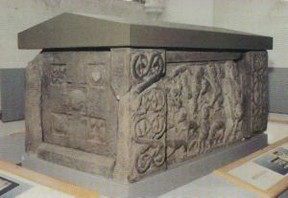 How do we know that it never happened?  Well, absolutely no verifiable fact in the story stands up to close scrutiny.

St Columba and his fellow Irish monks had already brought Christianity to Scotland, two centuries before this battle occurred.  A century after that, the Synod of Whitby had seen the Roman Catholic Church traditions win out over the homegrown Celtic Christianity.

The cult of St Columba, which was huge at the time, had to be quickly eroded.  It was suggested then that St Andrew was a more appropriate saint to patronize the Scots.

In 738, twelve years before the alleged battle, Acca, Bishop of Hexham, in Northumbria, had to flee his See.  He arrived in Scottish Cennrígmonaid and found refuge there. He had brought with him bone relics, which were purported to have been St Andrew's.

It boosted religious pilgrimages to the Abbey of Cennrígmonaid greatly.  So much so that the area was already being called St Andrews by the time Óengus and Athelstan clashed at the site.

And about that battle.  There's no record of any Athelstan in Northumbria during that period, let alone one invading Scotland.  And Óengus II didn't take the throne until 820, only seventy years after he was supposed to have been taking his people into war.

Apart from that, it's all true.  Every word.

However, let's be fair.  We haven't looked at Óengus I yet, and he was ruling at the right time.  Moreover, he was embroiled with wars against the Northumbrians.  But there's still no Athelstan and the St Andrews Sacrophagus (pictured above) was already in the Abbey by 747.

In short, there's a lot of mixing of half-truths and legends; but it was true when it needed to be.

That was when Robert the Bruce delivered the Declaration of Arbroath in 1320. The long association of St Andrew with Scotland was used, in a bid to convince the Pope to recognize Scottish independence.

It was around this time when writers, in Scotland and in France, created the story in the form that I recounted above.  It helped consolidate the case and cement the foundation tale that's still told today.

Though, as patron saint and early king respectively, I think that St Andrew and Óengus II would have been happy to oblige!

Learn More About the Fascinating and Dramatic History of Scotland

Buy these histories to uncover an on-going tale, which really needs no embellishments. Scotland continues to fight for independence to this day.

It's more than just not including Wales. Here's an article that I prepared earlier: http://wizzley.com/england-imperalism... :D

I don't think that such things ever really went away, but they aren't openly discussed and publicized anymore. That shift happened with Martin Luther and spread with Protestantism.

You know, the other day I was just reading about how the UK flag represents all the different flags, except Wales, I didn't know that before then. So, I thought it'd be neat to learn more about them individually, and look what just happened to be waiting here today! :D

I feel like you don't hear stories like this anymore- like leaders or generals or armies themselves receiving omens, good or bad right before a battle. At least not like this one. I wonder when that shift really happened.

Ragtimelil - I'm really glad to hear it! I intend to write many more, so it's good to know that someone appreciates them.

Sam - Oh! Thanks! I'll nip and read that in a bit. I know a fair bit already about that particular emperor (he had a Welsh mother!), but not this story. Thanks for the head's up.

Mira - There are so many embellishments, starting right back in the 8th and 12th centuries, as the Abbey drew pilgrims with the relics. But that isn't to say that there is no kernel of truth in the tale. It's a great one to tell!

Fascinating. I love your history lessons!

Oh, and one idea, look up the legend about the conversation of Emperor Constantine, there are some striking similarities in the story: http://en.wikipedia.org/wiki/Constant...

I loved that story with the dream and Andrew's cross in the clouds!! :D

The national flag of Cornwall also belongs to St Piran. But what are those co... 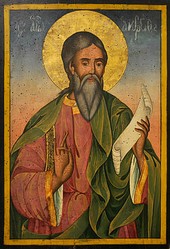 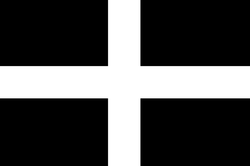 The national flag of Cornwall also belongs to St Piran. But what are those colors and who, indeed, was this patron saint?
89%  11   8 JoHarrington
Catholicism

Grab a daffodil or a leek and boil up some cawl! March 1st is St David's Day and all of Wales will be partying.
73%  8   7 JoHarrington
Dragons 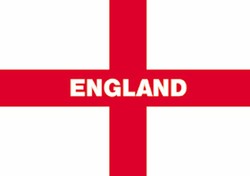 April 23rd is St George's Day. But how much do you really know about the patron saint of England (and elsewhere)?
Loading ...
Error!