On this eve of St Patrick's Day, March 16th, I thought I would take a brief look at the Patron Saint of Ireland and also look at a myth associated with him.

March 17th is St Patrick's Day. It is celebrated widely in America and Ireland where it is a Catholic Holy Day. But who was St Patrick?

There is no evidence for when Patrick was born but he was Romano- British from a wealthy family probably from Northern Britain. He is believed to have been kidnapped by marauding Irish slavers/ pirates when he was a teenager. These raids by the Irish were common on British land at this time. While he was in Ireland, he found that prayer helped him to survive. He stayed there as a slave, working tending the animals but eventually escaped back to England. After being welcomed by his family he became a Christian, then a priest and then became a Christian missionary into Ireland during the 5th or 6th century.

Patrick went back to Ireland as a bishop  missionary to convert the population but was not welcomed initially.

After some time however, he converted and baptised many people. Thereby, the Irish were Christianised by Patrick.

He is believed to have preached in Ireland for nearly 40 years and is thought to be buried near Down Patrick in County Down.

The Shamrock is a three leaved shrub that grows in Ireland and legend has it that it was used by Patrick to describe the Holy Trinity of Father, Son and Holy Spirit.  He is thought to have used this because of the Irish love of nature.

Croag Patrick is a mountain in County Mayo in the West of Ireland and means Patrick's stack or mountain. Tradition has it that Patrick fasted up there for 40 days and nights to follow Jesus' example. Many pilgrims climb the mountain barefoot as a penance.

As with many Christian traditions, Croag Patrick is believed to have been based on an ancient Gaelic pagan site which was Christianised.

No snakes in Ireland

St Patrick is believed to have banished all snakes in Ireland. This is presumably a  symbolic reference to his bringing Christianity to Ireland but it makes for a good tale anyway.

One monster, however, managed to escape – Caorthannach, the fire-spitter. The demon slid down a mountain away from him, but Patrick spotted her and chased her down upon the fastest horse in Ireland, which was brought to him.

The pursuit was a long one, and Caorthannach knew St. Patrick would need water to quench his thirst along the way, so she spat fire as she escaped and then poisoned all the water she passed along the way.

Though Patrick was parched and thirsty, he would not drink from the poisoned wells and prayed for help.

He eventually made it to the Hawk’s Rock, where he waited for Caorthannach. As she approached, Patrick  jumped out from his hiding spot and banished her from Ireland and she fell into the sea.

The evil fire-spitter drowned in the Celtic Sea, leaving a swell behind that created the famous Hawk Swell.

With Saint Patrick's Day, March 17th,  next week,  here are some traditional foods to celebrate it. They include:-
Corned beef and cabbage soup
Bangers and mash (Sausages and mashed potatoes)
Bailey's Irish cream cheesecake ( no bake cheesecake )

This is just a brief reflection on Patrick before St Patrick's day tomorrow. If you celebrate the day, I hope you enjoy it and think about the person to whom it is dedicated.

Derdiu
You have not lived if you have not tasted Bailey's! Cheesecakes would be made usually for special days and events.

But they always lacked the Bailey's Irish cream no-bake cheesecake.

Was the cheesecake traditionally homemade or was it store-bought?

If the latter, Bailey's would have made the recipe available somewhere, right?

More traditionally Irish than corned beef is pork. The Irish peasants kept pigs. Cattle were used for dairy production or sold to markets in Britain, so home-produced beef was limited.

Cabbage is not always popular now, but it is easy to grow and grows well in alkaline soils, as it favours a pH of 7 to 7.5, though it is comfortable with one of 6.5, so most Irish soils, except the boggy soils, which are acidic, are suitable for it. Cabbage is a vegetable which grows well in coastal locations, as it can tolerate salty winds, so it will grow well in exposed parts of western Ireland.

Tossing cabbages and potatoes is unknown this side of the pond. It isjj certainly not done at the Manchester Irish Festival..

Ty for commenting.
I doubt that the Irish now would have corned beef, cabbage and potatoes. Many want to leave these vestiges of poverty behind.

Here people have parades and toss cabbages, potatoes, and even oranges to the crowd. The tradition is corned beef and cabbage, although we have heard that the Irish do not partake of corned beef and cabbage as a customary meal on Saint Patrick's Day. This happens the weekend before Saint Patrick's Day. The next weekend is the Irish-Italian parade, celebrating saints Patrick and Joseph, march 17 and 19, and packs of speghetti, onions, and garlic are alos tossed. It actualy becomes difficult to find cabbage in the stores because so much is bought days earlier for the parades.

St Patrick's Day is in 11 days' time. We do not really do much for it. But for those who like to, here above are a few ideas for some traditional foods .

I like proper Irish stew which i had in Galway. Delicious. Soda bread is gorgeous with soup and cash, Blue is just gorgeous.
I am attending Frank's son's wedding in Ireland in June and am looking forward to some good food.

My favourite Irish food stuffs are cheeses, particularly Cashel Blue. Soda bread is not my favourite, but I eat it. I like Irish stew.

If you're of Irish descent and want to try the food of your ancestors,or are ...

I am fascinated by myths and legends and I hope to start doing some Irish myt... 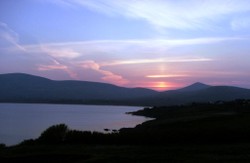 If you're of Irish descent and want to try the food of your ancestors,or are interested in World or Irish food, here's a " taste of Ireland". It's more than Irish stew or soda loaf
81%  27   6 Veronica
Legends