Studying mathematics focuses on practice, but there is much more. Proper study has many facets.

Studying mathematics at any level, including arithmetic, is different than studying most other subjects. This may be one reason so many students have difficulty. Study methods used for other subjects simply do not work.

Mathematics is learned by practice. It is inadequate to read mathematics and expect to become proficient in the field. Even concentrating and reading carefully with comprehension usually will fail to provide the proficiency needed in solving problems. One must practice. But how can one practice before understanding? Practice must be part, albeit a major part, of the learning process, but it is not the entirety of the process.

Learning mathematics requires first understanding why a process works.  It is important to believe the method of solving the problems has merit.  It should not be that someone, even a teacher, would ever advise a student to just do a series of steps without the support of giving a reason why those steps will produce a desired result.

The first step in learning mathematics is to understand why the technique will work, then focus on how to replicate the method in other problems.

Study Aids Help Children
Study aids for early education has become more important than ever. The need is real.

But It Must Be Done Correctly

Working through mathematics problems at any level requires practice to hone the skills.  Practice can be invaluable, but it must be done right.  Practicing correct techniques in mathematics will work wonders, but do not practice errant techniques.  Also, avoid overdoing to the point of making mathematics become a hated drudgery.

Do Not Reinforce the Wrong Technique

While practice is important, it is critical that erroneous technique not be reinforced.  This means only practice problems that have a solution provided.  If the problems are being solved correctly as verified by comparison with the given solution, continue practicing.  If there are errors, find out what is going astray before moving on.

Start with a simple problem.  Once mastered, it is not necessary to continue working more like it.  Move up in complexity.  However, there is an exception.  Working several simple problems before moving on can increase confidence.

Having taught college level students, I would assign to them a single problem of each type.  I would then tell them that they were adults and should be conscientious enough to pick the problems that caused difficulty, then practice more like those.  Time allocation is important and working many problems just for the sake of working more is time consuming.  Practice where the practice will benefit the student the most.  Practice where there is more to learn.  This is not the same type of problem for everyone.

Study Two Levels Beyond the Need

Many years ago, I was in a karate class.  At the beginning of each class, we practiced kicking face level or higher.  Then, one day the instructor told the class never kick that high in using karate, the reason being the opponent could move the waist, or neck causing the kick to be nullified in effect.  One student challenged the instructor by questing why we practiced beyond what we would ever use.  The instructor reflected briefly, then told us that the practiced level would be sometimes done well, but sometimes not.  Lowering the kick to no higher than the chest he considered going down two levels, which should be perfect every time.

Mathematics, and indeed other subjects, can best be mastered by working two levels past expectations.

Do Not Allow to Variations in Style to Be a Problem

Make certain to understand variations in representation of a number.  I witnessed a professor ask an author if a textbook used lead zeros such as 0.8, or just decimals such as .8.  A student should know these are interchangeable, yet he argued that if one textbook used one version and a textbook that the same students encountered in use for the next course would cause confusion.  The professor was adamant to the point of becoming belligerent.  As soon as he walked across the room the textbook sales representative asked the author of the book and me to step out of the room.  When we got to the corridor he was walking rapidly to an exit, turned back, then beckoned us to follow.  As we caught up with him, he informed us that we were going to lunch to be paid by his publishing company, but he could not bear listening to the whining professor that was left behind.

It Starts with Understanding Language

I have had students who would tell me that they would understand an application problem if only I could give them the equation.  Extracting an equation from an application problem, however, was a difficulty.  To such students I would reply that no one is likely to stop them on the street and say, “Solve this equation for me.”  More likely they would in real life situations be presented with words and need to determine an equation.  Of course, such a response was not what they wanted, they preferred to avoid the real difficulties.

Language difficulty need not be confined to application problems.  I often asked college algebra students if 8 ≤ 8 is a true statement.  Several students in a class would usually say no.  They would point out that 8 is not less than 8.  The symbol is translated “less than or equal to.”  Here, the word or requires only one of the two possible conditions.  Some lacked a very basic understanding of a simple word.

Memorizing every step from the beginning duplicates effort already spent earlier in the course.

The introduction image is a my own.

It is not the course, it is the depth of the material. In calculus one can always address a more challenging problem, regardless of the chapter.

In particular, I appreciate the observation about going two levels beyond the need. What would you recommend if the need is calculus?

A mother's review of the Kumon Math program including suggestions for kumon a...

Save the buttons from discarded clothing and recycle them as fun, hands-on math manipulatives. What could you learn with a collection of old buttons?
96%  7   11 thefont
Math Learning Strategies 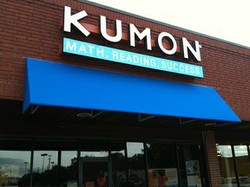 A mother's review of the Kumon Math program including suggestions for kumon alternatives.
Loading ...
Error!