Tea Drinking in the UK

Considering that the Brits are now one of the world’s largest consumers of tea, would it surprise you to learn that coffee became popular here first?

Considering that the Brits are now one of the world’s largest consumers of tea, would it surprise you to learn that coffee became popular here first? Coffee houses were first established in England in the 17th century, and the rest, as they say, is history. Soon after, tea was introduced into the coffee houses, and sales of tea overtook the sales of ale, probably because it was cheaper. For a time, but the government soon put paid to that by over-taxing and causing tea-smuggling.

How Did We Get Tea?

Historically, drinking tea or coffee and brewing, were just ways of purifying water, long before we had sewage treatment plants and decent tap water piped to our homes.  The northern hemisphere traditionally went for brewing, the southern for making drinks with boiled water.  Hence tales of Brits drinking ale with their breakfast (they did, but it was usually very weak).

It was the Venetian merchants who first introduced coffee to Europe, which may be why, even now; the Italian coffee shops in London serve the best coffee.  The coffee they serve has some real flavour to it – if you ever come to London, try Caffe Grana in St James’ Park Underground Station.  It is one of the best.  Coffee shops started to grow up in England in the latter half of the 17th century.  They became the “to go” place of writers, merchants, and generally well-to-do people.  If you think coffee is expensive nowadays, think again.  I can afford to drink coffee out nowadays, but the likes of me would not have been able to drink in the 17th century coffee houses.

Back at that time, when Europe sent its merchant ships around the world, the Portuguese and Dutch travelled east and, as well as bringing coffee back, they introduced tea as well.  England was a little late off the starting blocks where tea importation was concerned – the famous East India Tea Company didn’t get in on the act until much later, when its popularity was secured, in the 18th century. 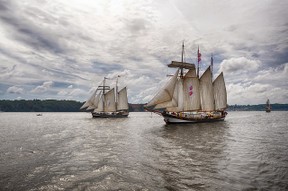 It just so happens that at around the time the Portuguese were off on their travels, the then king, Charles II, was married to a Portuguese, Catherine of Braganza.  Catherine introduced the fashion of drinking tea to the English Court, and the habit soon spread.  By 1676, tea and coffee houses, which had sprung up all over the place, had to have a licence to sell tea.  Tea drinking became so popular that there were even tea houses especially for ladies.  A chap called Thomas Twining, whose name may be familiar to us, opened up his first tea house for ladies in 1717, and gradually more opened up more in other parts of London. By 1700, over 500 coffee houses sold tea, which upset the tavern owners as it reduced their sales of ale and gin (gin was a very popular drink in those days).  It also upset the government – then, as now, they taxed alcohol, but not tea.  By 1750, the majority of British lower classes chose tea over other drinks.  The king tried to make it illegal to sell tea in private houses, but it was impossible to enforce this law.  Since our government has always tried to cash in on anything that will make it money, it really went for broke with tea – by the mid 18th century, the tax on tea was a whopping 119%!  It will come as no surprise, then, that the disgruntled British public started smuggling tea.

As with so many smuggled goods, the smugglers mixed other substances such as liquorice (could have been far worse!) in with tea to make it go further and so make them more money.  It wasn’t until 1784 that William Pitt the Younger, the then Prime Minister, introduced a law that reduced the tax from 119% to 12.5%, in order to stop smuggling.  Adding these other substances to tea didn’t cease until the Food and Drugs Act was introduced in 1875 to stop the practice.

Depending on where in the British Isles you live, tea can also be the name for the main evening meal (admittedly, probably less so nowadays with peoples’ working hours being so different and fewer people living close to where they live) or can be a light afternoon snack.  Afternoon tea has become popular, again, in top restaurants and hotels (at the time of writing, afternoon tea at the Ritz will set you back £47!  To be fair, it looks divine, the cakes are gorgeous, but it needs to be really special cake for that, in my opinion.)

It is reputed to be Anna Russell, the 7th Duchess of Bedford, who introduced the custom of afternoon tea.  Apparently, she found the time between lunch (taken between 12:00 midday and 2pm) and dinner (usually served after 7pm) too long and wanted something to bridge the gap, so to speak. 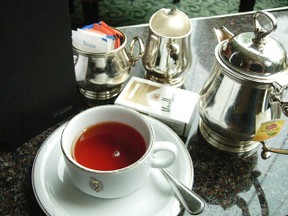 No story of tea in Britain would be complete without mention of tea clippers, the most famous of which was the Cutty Sark.  In 1832, when the East India Tea Company was given the monopoly on tea trade in Britain, it realised it had to cut the time taken to travel from the east to the London Docks, where the tea was landed in the UK.  Tall-masted, streamlined sailing ships, the best of them could manage nearly 18 knots.  These ships started informal races to see which one could reach the London Docks first, winning the captain and crew a hefty prize.  (Was this the start of paying employee bonuses, I wonder?)

The Cutty Sark, now docked at Greenwich, in South London.  She was built in 1869 in Dumbarton, Scotland, for a John Willis.  He had taken over his father’s business of ship owners in the Port of London, and his ambition was to make the Cutty Sark the fastest ship in the annual tea race.  Her build was started by a company called Scott and Linton, who had never built such a big ship before, and they almost went bankrupt before she was complete, so she was completed by another company. I love drinking tea, so I find it interesting to read about its rich history in UK.

In Britain there is no value added tax on food; and duty is paid on alcohol. Tea is thankfully safe.

Governments are always trying to add more taxes - things never change. I never did like the taste of coffee, but do drink a lot of iced tea. Occasionally in cold weather, I'll drink hot tea.

I enjoyed this. Very informative and interesting :)

If the Gunpowder Plot had succeeded in 1605, Princess Elizabeth would have be... 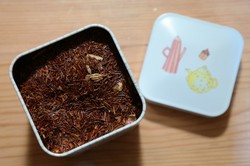 On May Day 1707, a group of politicians huddled in secret to sign the Act of Union, while rioting Scots sought desperately to stop them. Thus Great Britain was born.
87%  8   7 JoHarrington
Stuarts 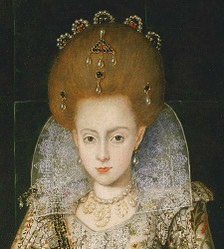 If the Gunpowder Plot had succeeded in 1605, Princess Elizabeth would have been abducted and made queen. She was only nine years old.
Loading ...
Error!