Where better to enjoy drinking tea with other tea drinkers than in a tea house!

Tea houses and tea rooms, even tea gardens, have existed all around the world where people drink tea. Because drinking tea is a perfect way to socialize, to enjoy spending time with people you know, or those you don't know yet. Tea houses provide the perfect environment to relax and enjoy the company of your friends, family, business associates, or whoever.

While in one sense tea houses are the same the world over, because they involve drinking tea, they also reflect the differences in culture of each part of the world. So, Japanese tea houses were designed for the very formal Japanese tea ceremony while British tea houses, or more commonly tea rooms, were established to allow respectable women to socialize in public without male company. Tea houses are also a great alternative to the pub or bar where alcohol is served, and thus are very popular in Muslim countries such as Turkey, and flourished during times when temperance movements were strong and during Prohibition in the United States.

So tea houses tend to be family-friendly, although some of the "stuffier" British establishments really cater only to women, or at least adults, and would prefer no children running around making noise, and certainly the Japanese tea house is no place for a child!

Tea houses in the UK

Tea houses, tea gardens, tea rooms in hotels and at work, tea is served everywhere in the UK!

Tea houses range from the simple and rustic, to the crowded and efficient, to the elegant. Travelers are delighted to find a tea house to relax and have a nice cup of tea before continuing their journey. The best have cheerful servers and offer local fare, cream teas when in Devonshire, fruit desserts at the berry farms in Scotland, and so on. The enterprising include gift shops and a play area for the children. The picture of the ice cream and fruit, with teapot behind, was taken at the Charleton Fruit Farm I visited with my family last year. Delicious!

Tea houses may serve cream teas with a china tea set, and served with scones with jam and clotted cream. Other "afternoon tea" snacks served with tea include small sandwiches, cakes, pastries, cookies, and fruit pies; whipped cream may well accompany them!

Shoppers, usually women, are grateful to rest their feet and sit down for a quick "cuppa," perhaps with a snack, in a tea room to fortify themselves before continuing their quest for bargains or necessities. Such places are not necessarily restful. My daughter and I were delighted to find a tea room open on Princes Street in Edinburgh after walking for hours through the streets enjoying the excitement of the Edinburgh Festival (particularly the Fringe) on a rather warm Sunday. We sat down gratefully with our tea and snack. Unfortunately though the room was crowded and there seemed to be no fresh air let alone air conditioning. We got hotter and weaker instead of refreshed as we drank our tea!

Glasgow boasts the most famous elegant tea houses, those founded by Miss Kate Cranston at the turn of the twentieth century, and designed by famous architect and artist Charles Rennie MacIntosh. The most famous, the Willow Tea Rooms on Sauchiehall Street, is the epitome of elegance and displays art as well as being an artistic triumph in its design. The tea's not bad either!

Tea houses and especially tea gardens were especially popular in London and its surroundings. Although many closed due to limitations on space, the famous Orchard Tea Gardens near Cambridge which entertained such famous writers and scholars as E. M. Forster, John Maynard Keynes, Bertrand Russell and Virginia Woolf, is still open for business.

Tea Houses in the US

While tea houses (and tea in general since the Boston Tea Party) may be less a part of the culture in the United States than in Britain, nonetheless tea houses exist throughout the country in a great diversity of styles, reflecting cultures from around the world.

For example, in Boulder, Colorado is found the Dushanbe Tea House, a gift from Dushanbe in Tajikistan. This was constructed by artisans from Dushanbe and neighboring areas as a gift for the sister city of Boulder. It features an incredible hand carved and hand painted ceiling, columns, and other decorations. A full service restaurant, it also remains true to its name by proudly offering elegant afternoon teas.

The most famous Tea house in the United States may be New York city's Russian Tea Room. Actually not really a tea house, this is a full service restaurant that is more known for serving the rich and famous of the entertainment industry than the Russian expatriates who founded it. The Russian Tea Room is renowned for its sumptuous red decor, servings of caviar. In keeping with its name it does feature antique samovars, the iconic Russian teamakers.

There are actually two establishments that translate into "Tea Houses" in Japan. One is the austere Chashitsu which is used for Japanese tea ceremonies; the other is the Ochaya which is an exclusive entertainment establishment featuring geishas.

Chashitsu tea houses were traditionally designed to reflect simplicity and tranquility, central tenets of the Zen philosophy that influenced their construction.

Located in tranquil areas, they provide an appropriate atmosphere for the austere Japanese tea ceremony. Such tea houses are made from wood and bamboo.

A typical Japanese tea house is surrounded by a small garden with a "dewy path" leading up to the tea house.There is a small door (the nijiri-guchi) through which guests enter. This symbolically makes a separation from the noisy and busy outside world as the guests enter into the small, simple, quiet inside of the tea house.

One famous exception to the simplicity and intentionally rustic nature of the traditional Chashitsu tea house is the golden tearoom constructed at Osaka Castle. Toyotomi Hideyoshi, a powerful feudal warlord who was able to unify Japan in the sixteenth century, was fascinated by the tea ceremony and ordered the tearoom in Osaka Castle to be made of gold.

The Ochaya tea house, by contrast, is a richly decorated elegant establishment designed for entertainment of the rich and famous. Clients are greeted and served by geishas, well dressed, talented entertainers who sing, dance, and hold conversations with their guests while serving food and drink in an environment that is designed to protect their privacy.

In China, people often gather at tea houses to chat, socialize, and enjoy tea. The practice of drinking tea is known as Yum cha, but this generally involves the eating of small servings of foods known as Dim sum. In some areas it was common to Yum cha at tea houses, although special dim sum restaurants have grown in popularity now.

Tea houses were often used for businessmen to discuss business deals and even legal disputes were commonly settled in tea houses rather than courts of law. The neutral, relaxed surroundings of a tea house together with the calming effect of drinking tea served to facilitate harmonious arbitration and resolution of disagreements, and the arrival at confidential agreements in business and other aspects of life.

Korean tea houses are varied, both in their own design, the types of tea and foods served, and the general atmosphere of the building. This is because Koreans are less formal in their approach to drinking tea than the Japanese or Chinese.

The Korean tea ceremony varies according to the season, with hot tea drunk in autumn and winter, and cold tea in the hot summer months. Also the ceramics and metalware used vary according to season. The bowls and cups used tend to have a naturalistic style, with religious influences. The focus of tea drinking is enjoyment of the tea and conversation. Thus Korean tea houses are familiar places with a very natural ambiance.

Tea is drunk everywhere and the experience of drinking tea together with family, friends and colleagues is so delightful that tea houses are flourishing everywhere. Some are historically part of the local culture, like Middle Eastern establishments which serve tea and coffee, as well as hookah, while others are a more recent innovation like the Dobra tea houses in the Czech Republic which offer a relaxing alternative to the bustle of fast-paced Western life. Some are for the tourists, travelers who need a place to relax and be refreshed before continuing or feature as the tourist attraction themselves. Others are for the locals, gathering places for friends or like-minded individuals, places to enjoy a cup of tea away from the stress of everyday life.

Dracula's Castle has a Tea House!

Bran Castle, which is claimed to have been used by Vlad Tepes (better known as Vlad the Impaler or Count Dracula) when he raided Transylvania, also has a tea house. In 1920, long after Dracula was gone, Bran Castle was donated to Queen Marie of Great Romania. The fortress was restored and transformed into a beautiful summer residence with a lovely park, fountains, and a lake. In that park the "Tea House" of Queen Marie was constructed.

Apple pie with your tea - can't you just smell how delicious that pie would be!

Charleton Fruit Farm - This fruit farm in Montrose, Scotland has an outside tea garden with the most amazing fruit deserts - a great place for the whole family to visit.

Do you have a favorite tea house?

You're right - tea is more calming than coffee.

Great article! The thing I really like about tea houses is that they are ideal for writing and book clubs, since they tend to be quieter than cafes and coffee shops.

Masala Chai is an Indian black tea made with spices, milk and sugar. 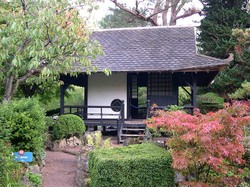 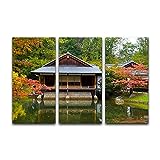 Masala Chai is an Indian black tea made with spices, milk and sugar.
23%  3   2 jptanabe
Kinds of Tea

What are White Teas? How are they related to black (and green) teas. Are they good for your health?
Loading ...
Error!