Following on our whinberry picking up Tegg's Nose, I made this quick 7 minute cheesecake for my grand niece's birthday party today.

Whinberries are a type of small bilberry / blueberry and are distinct from blueberries but part of the same fruit family. They grow wild round here and on Monday we went to Tegg's Nose and picked some to make cordials, jams, muffins etc.. I decided to make a Tegg's Nose cheesecake for my grand-niece's birthday party today.

Bilberry is also known in English by other names including blaeberry in Scotland,whortleberry in southern England, whinberry, winberry, windberry, wimberry in Northern England or fraughans in Ireland.

The cheesecake is a quick no bake cheesecake, different in texture to baked ones but delicious too.

The whinberries grow amongst the bushes. They are very small and the wild ones have a delicious flavour. They are easy to pick but small so lots are needed to get a useful harvest.

My 3 year old grandson helped with the foraging for whinberries today. He was surprisingly  good at it and  thoroughly enjoyed it. He climbed the hill ( 3 years old ) and held his box whilst he sat and picked whinberries ... but more whinberries went in his mouth than in his box .....

This is a very quick non baked cheesecake which takes about 7 minutes to make before letting it set.

I took this to my grand-niece's birthday today. It was all eaten, every bit. The fruit was still growing wild 48 hours beforehand.

whinberries and bilberries are small wild blueberries but because they are wild in the open they have a stronger taste. We love them here and they only grow wild in this part of England as far as I know.

Ginger biscuits( cookies ) on the base make an interesting flavour.

you do so well with your coioking. i am humbled by your skills. I am sure yours tastes wonderful

Re-visiting this appetite-inducing wizzley caused me to remember something that I meant to say in 2017, 2018 and 2019.

This recipe, which I followed more or less in each of those years, got rave reviews and lots of "Tastes like more" comments. A major contribution to the reaction is the way the finished product looks and the interaction between the ingredients, especially the crushed ginger cookies.

This year I plan to make your recipe, with bilberries and mascarpone now that there's a reliable source for them.

Would you have any idea how "my [improvised, temporary]" version of your recipe tastes like? Would it have been tasting anything like your recipe, which I happily will be following to the letter this year?

In Staffordshire I have seen bilberries in low growing, ground level shrubs and also in a tall bush.

Our milky West of Ireland skin is ideally suited to the North of England weather . :)

Ditto, I also have a fair, freckled skin vulnerable to sunburn.

My son, Matthew, and I picked bilberries [whinberries] on the Long Mynd in Shropshire, which is in the same broad area as the places that you are describing. This was a good way to augment a walk in the country.

Whinberies is more common a name for them in this part of the world, . very very tiny blueberries.

Derdriu
My daughter in law is very good and protects his young skin from the sun's rays at all times. WE are Irish by genetics and I have the Irish skin hat burns to a frazzle I the sun . I never go out unprotected

I have noted that whinberries [also known as bilberries] are very common in the Southern moorlands of the Pennine hills, where Tegg's Nose is situated. When we walked the Staffordshire Cloud, also in that region, I saw how prolific they were.

But while we do get wild strawberries they are not as prolific where we re s they seem to be in your area, Derdriu. We do get blackberry in abundance. 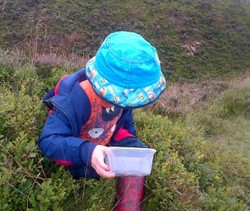 This morning I have been up Tegg's Nose! That sounds fairly disgusting but it was a delightful experience.
63%  12   4 Veronica
Travel & Places

Cheshire's world famous radio telescope Jodrell Bank was the location of my Cheshire Day out today. Here's an account of it as a location and a little about its past.
Loading ...
Error!