Ten of the top contenders for the best comedy movie of all time.

Did it make you laugh, and, if so, how many times? That is normally the acid test for a good comedy film. But to make it into Steve Rogerson’s top ten list, the movie also has to add some originality to the genre, something that is memorable, something that will still be talked about for years after.

What one person finds funny can have another person squirming with embarrassment, what can have one person laughing till they cry can have another looking on in bored bewilderment. There is no golden recipe for comedy and thus picking a top ten list of great comedy movies is obviously extremely subject to taste.

That said, all the films below brought some originality to the genre. They all broke new ground in one way or another and as such are seen as landmarks. Some will make you laugh, some will make you cry. Watch them to find out which.

This spoof disaster movie spawned a number of imitators as well as a sequel, but this scores because at the time movie goers had seen nothing really like it. The running gags and the branches into surrealism keep the audience laughing while it tells a typical disaster movie story with all the clichés. Disaster movie makers must have been squirming in their seats. Leslie Nielsen was brilliant.

Mel Brooks directed and appears in this comedy western. The plot centres on Bart (played by Cleavon Little), a black sheriff appointed deliberately to offend the townspeople of Rock Ridge to make it easier for a railroad company to buy the land for a new railway. Gene Wilder leads the supporting cast as the drunken gunslinger Jim.

This Stanley Kubrick film’s full title is Dr. Strangelove or: How I Learned to Stop Worrying and Love the Bomb. An American general goes off the rails and launches a nuclear attack on the Soviet Union but the Russians have a doomsday device that will destroy all life on earth if that should happen. This black comedy plays on the paranoia that existed between the two countries during the Cold War and stars Peter Sellers as Dr Strangelove, as well as in two other roles.

This thinly disguised spoof on ageing Star Trek actors bickering at a science fiction convention won the hearts of most SF fans, and even won a Hugo Award in 2000. That the film itself turned science fiction when a bunch of aliens mistook the reruns of the shows for actual documentaries of their adventures just added to the fun. Alan Rickman, Sigourney Weaver and Tim Allen are the main stars.

Arguably the best of the famous Ealing Comedies, this tells the story of Louis Mazzini (played by Dennis Price) seeking revenge for the death of his mother by murdering the leading members of the D’Ascoyne family for making her an outcast. There are twelve members of the family – Alec Guinness plays eight of them – between him and taking over the estate.

The most controversial of the Monty Python films, this outraged religious groups around the world and was banned by many local councils in Britain. Despite this, it was a box office success telling the story of Brian Cohen who was born on the same day but in a neighbouring stable to Jesus Christ. Brian himself accidentally becomes a prophet with a large following. Brian is played by Graham Chapman and the other Python regulars are there including Michael Palin as Pontius Pilate among others, as well as John Cleese, Terry Gilliam and Eric Idle all in multiple roles.

Woody Allen and Marshall Brickman wrote this science fiction comedy in which jazz musician Miles Monroe (played by Woody Allen) is cryogenically frozen and is woken up two hundred years in the future by a bunch of rebels who want to use him as a spy to find out about the government’s Aires Project. The film also stars Diane Keaton and it won a Hugo Award in 1974.

A weird disaster movie spoof that even pokes fun at other spoofs as it follows the inaugural trip of Cyclops, a nuclear-powered bus complete with its own bowling alley, dining room and swimming pool. When the driver and co-driver are killed, the bus company is forced to turn to disgraced driver Dan Torrance (played by Joseph Bologna) who ate his passengers after a bus crash and co-driver “Shoulders” O’Brien (played by John Beck), so named because he keeps driving on the shoulders.

Though romcoms are generally a lower form of comedy, this one makes it into the list on the back of the infamous “faking it” scene in the restaurant. Apart from that, this film does not have a lot to recommend it and arguably does not really deserve a top ten listing. It stars Meg Ryan, Carrie Fisher of Star Wars fame and Billy Crystal.

Best Comedy Film of All Time

All the above with the exception of When Harry Met Sally (included for the sake of variety – it’s probably the best of the romcoms) could probably stake a claim to being the best comedy film of all time. Likewise, comic greats such as Young Frankenstein, Dark Star, Naked Gun, The Dewey Cox Story and Bad Taste were all considered for the above list. Readers should feel free to add their own suggestions in the comments box below.

SteveRogerson, Thank you for product lines, pretty pictures and practical information.
Three films come to mind: Arsenic and Old Lace, Office Space, Swing Vote and, in some scenes, Term Life and Three Days to Kill. You must know the first, because of Cary Grant's participation. But would the others have made it to your side of the pond? 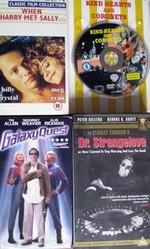 Great Comedy Films Or: How I Learned to Stop Worrying and Love...
29%  0   4 SteveRogerson
Other Movies

What is the best lesbian movie of all time? A look at ten strong contenders.
37%  1   5 SteveRogerson
Horror Movies 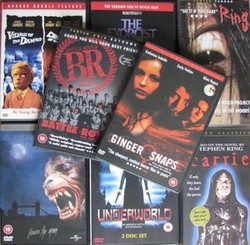 Make sure you are not alone when you watch the ten best horror movies of all time.
Loading ...
Error!