Teotihuacan and its Pyramids

Teotihuacan in Mexico is known as "The City of the Gods" and has amazing pyramids.

Teotihuacan, "The City of the Gods" in the Nahuatl language of the Aztecs, is today a huge archaeological site in Mexico. It is a UNESCO World Heritage Site, which means that it's open to tourists and is preserved as well as somewhat reconstructed. Much of the site is still not understood however.

Image of Teotihuacan from Wikimedia Commons.

Teotihuacan was a great city in Mesoamerica, before the time of the Aztecs. It is unclear who exactly built it or why it collapsed. The inhabitants left no written accounts of their lives so perhaps we'll never know all their secrets. What we do have, though, are some amazing pyramids. These are the stepped pyramids of Mesoamerica, which are rather different from the Ancient Egyptian pyramids like the Pyramids of Giza. While the Teotihuacan pyramids may not quite qualify as the largest pre-Columbian pyramids, the Teotihuacan people are credited with developing this style.

The City and People of Teotihuacan

The name "Teotihuacan" means "The City of the Gods" or "Birthplace of the Gods" in the Nahuatl language of the Aztex people, reflecting their mythology. According to an Aztec creation myth four great ages preceded the present world and each ended in a catastrophe. Our age is the fifth age and somehow the god Nanahuatl saved this world from destruction and was transformed into the sun. This myth places the creation of this age at the location where Teotihuacan was built.

The Aztecs did not build the city though, taking it over after its somewhat mysterious abandonment around 750 C.E. It appears that the city was sacked and burned, possibly from an internal uprising.

The building of Teotihuacan is also mysterious. The earliest buildings at Teotihuacan date to about 200 B.C.E., and the Pyramid of the Sun was completed by 100 C.E. Teotihuacan has been attributed to the Toltecs, although their civilization flourished years after Teotihuacan. Other civilizations which at least contributed to Teotihuacan are the Olmec and the Tatonac cultures; contemporary Tatonac people actually claiming to have built Teotihuacan.

Teotihuacan was a pretty big city. At its zenith between 150 and 450 C.E. the city housed a population of between 150,000 and 250,000 people. It was the center of a powerful culture that dominated Mesoamerica. The religion of Teotihuacan included worship of Quetzalcoatl, the Feathered Serpent, and Tlaloc, the Rain god.

Although Quetzalcoatl was a benevolent god, those who worshiped him were generally involved in blood sacrifices. It is believed that sacrifices were made to dedicate each new building upon its completion. Enemy warriors were ritually sacrificed as well as animals believed to have spiritual powers, all so that the city could prosper. Excavations of the pyramids at Teotihuacan revealed human and animal bodies that had been sacrificed many decapitated or with their hearts carved out probably while the victims were still alive. So the people of Teotihuacan were not really a nice lot!

They did however produce a large number of interesting artworks, many of which have survived. Unfortunately they did not appear to have a written language, or at least there are no written accounts of their culture except those in Mayan inscriptions describing encounters with Teotihuacan merchants and leaders.

The spectacular stepped pyramids that featured prominently in Mayan and Aztec architecture originated in Teotihuacan. These pyramids, then, may be the greatest legacy of the people of Teotihuacan.

Pyramid of the Sun

The Pyramid of the Sun was so named by the Aztecs, who discovered the city of Teotihuacan centuries after it was abandoned. There is no record of its original name.

The Pyramid of the Sun was constructed in two phases. The first, completed around 100 C.E., produced the basic pyramid. The second round of construction increased its size and added an altar atop of the pyramid. That altar no longer exists, however.

One thing that makes these pyramids so amazing is that they have all these steps on the outside, that you can walk up. Pretty steep too, so no small climb!

Pyramid of the Moon

The Pyramid of the Moon is located at the northern end of the Avenue of the Dead, the main axis of the city of Teotihuacan. The pyramid faces south, down the avenue which is lined with pyramidal constructions. The Aztecs believed these to be tombs, inspiring the name of the avenue, although they are now understood to be ceremonial platforms that were topped with temples.

Great View of Teotihuacan from the Pyramid of the Moon!

A pyramid is the simplest form of building, as it is inherently stable.Clearly, these pyramids are younger than the Egyptian ones by over two thousand years, but the presence of steps reminds me of the Mesopotamian zigurats, temple-towers in pyramid form. These are also older by far than the Teotihuacan pyramids, but they may have served a similar function, of allowing the priest to ascend to offer worship to the sun god.

Good point! It does seem that pyramids are not alone - the Giza Pyramids have the Great Sphinx to guard them of course!

I always thought the pyramids were isolated, and I never thought of the rest of the area. You have one image here that shows a wider view and reveals much.

As a boy I just got a picture, but from the images selected here I gained a sense of the extent of the site. Thank you. My understanding of the site is now much improved. But moreover, Angela is right to highlight that the site was constructed without modern machinery. That is impressive.

They are truly amazing - to have been constructed without modern machinery.

I first saw pictures of them when I was a child leafing through some of my mother's books, and I found them intriguing. So I found this article interesting.

The Great Pyramid of Cholula in Mexico was constructed as a Teocalli - a pyr...

Who or What Made Them?

Questioning the origins of things - debates on who or what created a number o... 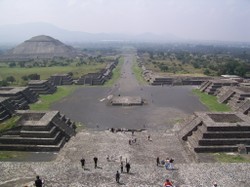 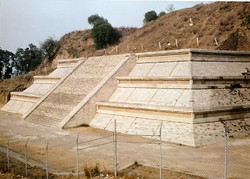 The Great Pyramid of Cholula in Mexico was constructed as a Teocalli - a pyramid with a temple on the top. Now it looks like a mountain!
51%  8   4 jptanabe
Culture and Society 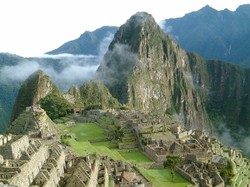 Who or What Made Them?

Questioning the origins of things - debates on who or what created a number of interesting features in our world.
Loading ...
Error!